Now more than ever, buyers are expecting agents and managers to bring them not just a spec script but a ready-to-shoot package complete with director and actors. We asked our panel how this affects them as they navigate increasingly tricky waters in search of a deal.

Sign here, please. I got a package for ya...

Regular readers of this column (now celebrating its eighth year, whoo-hoo!) have watched us track the spec market as it heats up, then ices over again for some time now. One trend that no one is especially happy about: every year it seems to get harder and harder to sell a script, primarily due to media consolidation. There are ever fewer (and more persnickety) buyers; companies that used to churn out movies by the bucketload no longer do so. It’s tough out there for us writers. Now let’s compound that by throwing packaging into the mix. As always, our panel of top industry literary representatives has the straight skinny on what packaging means to the likes of us.

So what is packaging? It simply means attaching ‘elements’ — a name director or actor — to a spec script to improve the chances of a sale. “It’s all about directors now,” says Energy Entertainment’s Jake Wagner. “Even great specs are going into the studios, and execs are turning around saying, ‘Who’s the director?’” Shuman Co.’s AB Fischer says that executives are getting lazier and lazier. “They want the puzzle put together beforehand.” UTA feature lit agent Julien Thuan adds, “They’re making fewer movies, so they have to be much more specific about how they put those movies together,” he says. “They have the leverage to have other people do more of the work before they spend any money. In the absence of brand recognition (source material such as a video game or comic book or book,) you have to show the studios what the movie is and give them a comfort level,” he says.

With that in mind, I asked our panelists how important packaging is to their spec script marketing strategies. “That is, for the most part, our current marketing strategy,” says Magnet Management's Jennie Frankel. “It’s not that you can’t sell something without a package, but in general studio execs (no longer want to) go through a development process with scripts. They would much rather find projects that are ready to shoot. Part of that process is knowing who the director is going to be.” Wagner seconds that. “We’ve been trying to package up everything first. It can take a while to get actor and director reads, but in this economy, that’s what’s getting it done.” Fischer does not dissent. “It’s the first thing I think about,” he agrees. “The spec market’s changed. Disney was making a ton of movies. They’re making a dozen (per year) now. The days of ‘Oh, this is a great idea, we’ll develop it’ are over.”

That’s bad news for any of you out there thinking your script’s ‘good enough’ and fantasizing that whoever buys it will eventually to solve all its problems. Sorry, Charlie. So suck it up and get used to it—packaging is here to stay. And it’s got its cons, but a few pros, too. 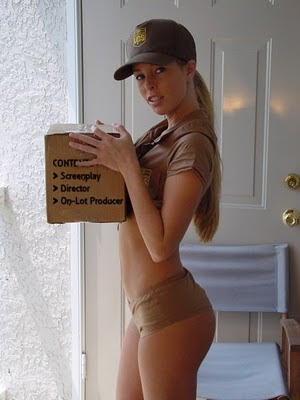 “It’s getting more and more difficult to go out with a spec without having anybody attached. The days of ‘Oh, this is a great idea, we’ll develop it' are over.” –AB Fischer, Shuman Co.

Probably the biggest hassle of packaging is it is freakin’ time-consuming. In the mid ‘90s, a producer shopping one of my action scripts recommended we send it to Mel Gibson’s agent. He cautioned me it could take ‘a while’ to hear back, even though he knew the agent personally and I was at the same agency. An eternity later: the big ol’ pass came in. Months of sitting around for nothing. “It’s incredibly frustrating (to clients,)” says Thuan. “I think they feel like, ‘Why is it so difficult to get studios to move on things?,’ and ‘Why is it so difficult to sell things?’ Unfortunately, it’s the reality that we have to work with.” Fischer says that many writers grow impatient with the packaging process “because they put their blood, sweat and tears into something over months and months, and they want to take their shot. It’s my job to manage their expectations and explain to them that getting someone (attached) is going to put them in a better position to actually earn some money. But I’m still a strong believer that good material will find a home whether it has an attachment or not.”

Another issue is that there are only a small handful of folks of any real value as attachments, and they are extremely in-demand. “That’s always a worry when you’re trying to attach someone,” says Frankel. “You have to figure out how many other projects they’re attached to, and are they busy for the next three years? So that their attachment is actually meaningful.” Wagner notes that if you get Guillermo del Toro or Gore Verbinski to sign on, awesome, “but that thing isn’t going to get going for at least five years. Those guys are booked out. You want to try to figure out who’s looking for their next movie right now, which adds a whole new level of difficulty.” One option is to check out the newcomers, hot from Sundance or similar. Case in point: Timor Bekmambetov (‘Wanted.’) “He came out of nowhere, really,” continues Wagner. ”He did these really cool Russian movies like ‘Night Watch.’ He gets ‘Wanted,’ which does these huge numbers, and now he’s, like, the number one name on everybody’s list because he’s available. Jonathan Levine (‘All the Boys Love Mandy Lane’) — his movie ‘The Wackness’ comes out, and then he sets up three things. So yeah, you want those indie guys who are ready to pop.” They’re available, they don’t have anything in development, and they’re efficient for the studios to hire, too. “They don’t have back end participation, you know? It’s a good deal for everyone.”

One last potential pitfall of the packaging process: “What studio would buy a script when they find out you’ve given it to every comedy actor in town, and they’ve all passed?” says Thuan. “Sometimes people like to put a toe in the water, send (the script) to a couple of people and see if they bite for packaging purposes, but you can’t go too far.” Fischer agrees, “I may take my shot with one or two people. But putting a package together takes a lot of time,” he says.

And what happens if your rep craps out and can’t get anyone to attach to your script? “(We’re) still 100% behind it,” enthuses Wagner. “It’s not disheartening. Attachments aren’t easy to get. Actors will rarely attach to something without a director on board. But an actor’s or director’s production company may take the script in (to the studios) as producers, which is what McG did on ‘Medieval’ (a spec by Mike Finch & Alex Litvak which sold to New Regency in March for $850,000 against $1.6 million.) We believe in our material, so we’re still rocking out with as much enthusiasm as if we had gotten Leo or whoever.” And if all else fails, there’s always last-minute packaging. Spec scripts sometimes pick up attachments once they’re sent out to buyers. “When people go out with ‘clean’ scripts, I think they also send to the representatives of certain elements that might be appropriate,” says Thuan, who notes that the response time from actors and directors is a lot faster when the material is in play.

Wary? Bear in mind there are advantages of packaging to the writer, too. Getting an in-demand director attached to your script can drive a deal, put a feather in your cap and get you that much closer to getting the movie made. “It might take longer to physically get paid as a writer,” says Thuan, “but you have a much bigger role if you control your material (and assist in) deciding who you approach. You have a lot more leverage at the deal-making point.”

Okay, so maybe packaging isn’t so bad. In any case, you’d best get used to it. But will the days of simply sending out a script ‘clean’ soon be obsolete? “I will still do it,” says Fischer. “I don’t think that’s ever going to change. Specs are going to go out without attachments forever. But you’ll give yourself an advantage if you have the right package.” Frankel concludes, “There are definitely things that are selling that don’t have attachments. But our clients have put so much time and effort into writing the project that if we can take a shot with a few people who would guarantee a bigger sale—and those are very few people — but if you can get one, that’s how you get something really big going.”