Well, this is something to take note of. Our pal John Fasano -- one of only maybe five guys who has had a 2-decade-plus career as a working Hollywood writer -- has announced his first-ever Screenwriting Workshop. John is an incredible storyteller and probably one of the best teachers around. Here is a rare chance to learn from someone who has actually DONE IT. On top of that, he's offering a 10% discount to Coverage Ink clients. Read all about the workshops below and then visit his site. Then when you're ready to rock, e-mail him at TITMinc (at) gmail.com and say, "Man, let's do this!" 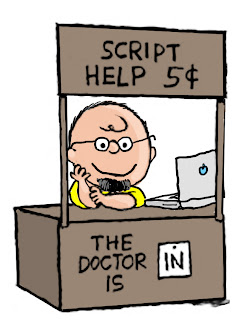 FROM YOUR HEAD TO THE PAGE

Learn the craft of screenwriting with Hollywood’s most prolific screenwriter, John Fasano.

In a world where getting a single script sold is a major accomplishment, WGA award nominated Screenwriter John Fasano has more than forty credits on feature films and prime time television including:  Another 48 HRS, Darkness Falls, Alien 3, Universal Soldier: The Return and Tombstone.

Former president of the Sony/Canal + Equinoxe Screenwriting seminar in Bordeaux, France and guest lecturer at AFI and the Writer’s Boot Camp, John will personally guide you from concept to script.  Classes will be held in a private Brentwood, California location. Enrollment will be limited to ten students per class so personal attention is ensured!

BEGINNING SCREENWRITING • JUNE 1 thru 2, 2013
Transforming your “big idea” into a viable outline.  Find the outlining method that works best for you. Who are your main characters?  Structure is the key.  Learn how to create a three-act structure that brings your story to life. Prerequisite:  An idea you’d like to transform into a screenplay.

INTERMEDIATE SCREENWRITING • JUNE 8 thru 9, 2013
Complete the journey from outline to script.  Write scenes that bring your characters to life and reveal their distinct voices.  Learn what makes great dialogue with tension on emotional and physical levels. Bonus:  Preparing to face the marketplace.  An insider’s secrets to success. Prerequisite:  A fleshed-out outline or draft of your screenplay.

For more information and to register contact us at: TITMinc [at] gmail.com

*10% discount for clients of Coverage, Ink.

Writers on the Storm Finalists to be Announced 5/1/13

Just a slight delay, less than a week, so please don't be too angry with us! The truth is we have tough choices to make still. 50 scripts down to 10. Ugh. It never gets any easier. But we will announce our top 10 finalists, TV and features, on May 1.

Is there a Brooks Elms/Glenn Sanders in this year's batch? Brooks and Glenn are last year's winners, who got signed by UTA and their careers are now exploding. They've both landed writing assignments, and they have another project with a major producer attached which I can't say anything more about yet -- except to say holy crap, our boys done good!

So until then, sit tight -- aw heck, don't sit tight. if you made our top 50, you should definitely enter the Nicholl as well, so hurry up and get your script in quick as the deadline is rolling in fast. I seem to recall back in the day entry was free. Ha!, yeah, not anymore. Best of luck and KEEP WRITING.

Writers on the Storm semifinalists are now posted! http://writerstorm.com/(and also below for your convenience.) By now, everyone should have received your feedback forms. If you haven't, please 1) check your spam filter for anything from writerstorm, then 2) email Julie at writerstorm@gmail.com and we will resend right away.

BIG Congrats to everyone who made the cut. And to the vast majority who didn't -- we feel your pain. We've all been there. Every one of us have been eliminated from contests, from consideration for jobs, grants, assignments, from so many things. Being a writer means you have to learn to take getting whacked upside the head repeatedly and pretend you're OK with it.

The only thing I can say is, hey -- yeah, it sucks, BUT... maybe it's only a draft away. Check out the feedback and really study it closely. The stuff that made the reader balk could be fixable relatively easily. It's worth that extra level of scrutiny. It's easy enough to say "These people are idiots" and forget about it. And maybe we are. But if the feedback is even close to the mark, then as students of the biz we should all take it under consideration and at least chew it over. Knowledge is power, and sometimes even iffy notes can make us think of creative solutions or better ways to approach situations in your story. Best of luck to everyone, and to all my fellow writers: I APPLAUD YOU.

Now comes the hard part: whittling these down to the top ten by the end of April, when they will be posted right here and of course on our facebook page. Yikes.