TO CREATE A NEW SUPERHERO FRANCHISE ABOUT A SUPERHERO WHISTLEBLOWER WHO FIGHTS HIS OWN GOVERNMENT, WRITER/FILMMAKERS JIM CIRILE AND AARON POPE BROUGHT IN BIG MUSCLE.

The writing team of Jim Cirile + Aaron Pope knew they were on to something when they sketched out their original short screenplay for Liberator – a character study of an aging ex-superhero with real-world problems. “Liberator was one of ‘America’s goodwill ambassadors’ – leader of a government-created team of supers,” says Cirile. “But that was just their cover. What they were really up to was something else entirely.” When a black op went south, the Liberator was forced to take the fall. Decades later, after a long stint in prison, Liberator is disgraced, reviled -- a traitor. “His own family, his daughter, won’t even talk to him any more. And that is just killing him.” So at great personal risk, after all this time – Liberator decides to blow the whistle and tell the truth.

“We knew that trying to launch an original superhero franchise without source material would be next to impossible,” says Pope.  "But if we had something with the right combination of grit and heart, we might just be able to speak to people with it.  That was worth the risk for us so we gambled on getting the closest thing to a real life superhero we could find and sent the script to Lou (Ferrigno)."

Ferrigno sparked to the role immediately.  “It really spoke to him,” says Pope. “Once we had Lou on board, the cast came together quickly – Ed Asner (Up), the amazing Peta Wilson (La Femme Nikita) and Mr. Worf himself, Michael Dorn, and we were off and running.” Well, except for a little matter of money.

Cirile and Pope decided the best strategy was to shoot as much as they could with the funds they had. “We had enough dough to shoot five days,” says Cirile. “That was enough to get us a lot of great footage to put together a sizzle reel for Kickstarter.” With the reel showing off genre faves Wilson and Dorn, and featuring Ferrigno himself asking for finishing funds, the team set out to raise $18,000. “It was down to the wire,” says Pope. “We were sweating it out there as the deadline got closer and closer. But then with literally seconds to spare, three big donors all came in and put us over the top. We wound up raising almost $25,000.”

Turns out Cirile and Pope had their fingers on the pulse of time. Liberator landed right in the midst of the current whistleblower debate. Huffington Post, USA Today, Fox + Friends, Yahoo! News, and soon CNN have picked up or plan to run articles on the story.

“It’s a flipped coin,” says Ferrigno, regarding how he feels with regard to NSA whistle-blower Edward Snowden exposing rampant, warrantless US eavesdropping. “In Liberator, I played a government agent who was dumped from the government, and he decided to blow the whistle and write a book. Being a police offer myself—being a deputy sheriff—I think leaking information is wrong. I think (Snowden) committed a crime. But I think it’s starting a dialogue. The constitution protects freedom of speech; (Snowden) felt he had to speak out. Part of me feels that it’s almost like Big Brother. So some people see him as a hero, others a traitor. It’s the same thing with my character.” 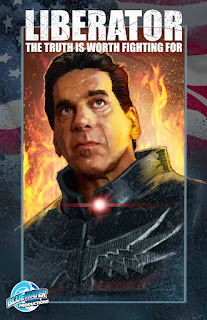 Liberator premiered last year at Holly Shorts Film Festival and since then has been playing at film festivals and comic-cons. To date it has won Best Dramatic Short from CalShorts and the Award of Excellence from IndieFest. The project’s building momentum has resulted in a comic book deal from Bluewater Comics, with Lou Ferrigno: Liberator hitting stands this summer. Even before publication, it’s already won an award: Best Digital Comic from New Media Film Festival. “This is a dream come true and in fact, it's almost like we've come full-circle,” says Pope. “We not only get to expand the world of our characters, but we’re creating our own source material, which was the issue we faced in trying to start a new superhero franchise in the first place.”

Now that Liberator is both an award-winning short and a comic book series, can a feature film be far behind? “Franchise was our goal from the beginning,” says Cirile. “The project already has fans in the biz. We’ll see what shakes out. In the meantime, this is my geek dream cast, geek dream project, and we’re really stoked that people are feeling it. Truth is worth fighting for.”

Liberator is produced by Coverage Ink Films. More at liberatormovie.com.

We're happy to present this year's winners and top ten for our writing contest WRITERS ON THE STORM.

This is one of those years where we had a bunch of scripts with really excellent craftsmanship on the page, and no clear winner in either TV or features. Of course we did have to choose winners, but damn if there isn't a lot of talent on display here.

Over the course of the next few weeks we'll be getting our detailed feedback to the top tenners in preparation for circulating their scripts and loglines. We're going to try to polish every one of these to a brilliant shine so that they cannot be ignored. Wish us luck!

For everyone on this list, I think allowing a few moments of patting yourself on the back is in order. We get enough rejection every day as writers that a moment or two of actual feelgoodedness every now and then is mandatory. And for those of you guys who entered and did not make the cut, really, don't sweat it. We mean that. The difference between pass or consider can be as small as tweaking a few things in a two-hour rewrite sometimes. So hopefully the contest feedback will give you a heads-up as to areas that could maybe require a bit more TLC in your script. Or, we could simply have been wrong. Subjectivity is an unfortunate but unavoidable part of the process, as much as we try to standardize our criteria.

In any event, keep the faith, folks, keep on plugging, and do not give up. This writing stuff ain't easy and no one ever gets anywhere in the first ten years. And those who do, we want to strangle them, don't we? LOL!

Shaman by Eric Ian Steele
A white cop is raised by a Native American shaman with the power to control animals. Now he uses the same skills to bring criminals to justice.

Strategic Services by Jonathan Jones + Francisco Magdaraog
The Office of Strategic Services, or OSS, was the predecessor to the CIA. This series explores America's foray into espionage, assassinations and subterfuge.

Stealing Home by Sebastian Arboleda
A career thief is saddled with having to raise his three difficult half-siblings while dealing with obstacles from his past and present in this outrageous comedy pilot.

THE REST OF THE TOP TEN - In No Particular Order

Ditch Plains by Bernard Urban
A teen biker tries to fit into a town of surfers, but as he learns the secrets of his new home, he believes his mother, a CIA case officer missing for over ten years, secretly lives there.
Freebird by Simon Kay
Jimmy Waits, a former rock star fallen from grace, is released from prison after serving a ten-year sentence. In the outside world, he must navigate his old band mates and former loves, as he seeks personal and musical redemption.

Freetown by Jeremy Dickens
A burned out criminal defense attorney in a violent Arizona border town struggles to navigate a new world of corruption when a shadowy private security firm is hired to keep the peace.

Path by Michael Wright
A troubled detective finds himself caught in the middle of a decades-old battle between the most powerful man in the world and a group of telepaths determined to expose his dark secrets.

The RetroCog by Steve Morris
When an adrenaline junkie is paralyzed in a motorbike crash he develops paranormal powers, which he puts to use helping a police case but his abilities turn out to have unexpected consequences.

Triple Agent by Steve Morris
When an undercover agent publicly stops a terrorist attack the revelation of his secret and convoluted life endangers him from all sides as levels of conspiracy begin to surface.

The World by Kathleen Cromie
A shooting in Washington serves as the challenge to two rivals on a renowned newspaper who vie for the newly vacant position of managing editor.

Carn Evil by Jason Siner
After a traumatic incident maims a newlywed and causes the disappearance of her husband, a young woman rallies her friends to return the crime scene -- a carnival with dark, deadly secrets.

Clouds of Sorrow by Jack Davidson
Gripping tale of ten-year-old Sudanese boy who journeys from Darfur to Chad after his family and village is murdered by Janjaweed warriors. Also winner of Austin Screenwriting Contest.

Damascus Cover by Daniel Berk + Samantha Newton
An Israeli spy navigates the tricky terrain of love, betrayal, and shifting allegiances when he is assigned to rescue a scientist from Damascus, Syria in the late 1980s.

THE REST OF THE TOP TEN In No Particular Order:

The Basement by Dawn Marie Guernsey
LENA, trapped beneath a building toppled by a tornado, is discovered by a madman who uses the property as a dumping ground for his murder victims.

Cake by Patrick Tobin
A self-destructive woman's obsession with the suicide of an acquaintance leads to a madcap journey of self-discovery.

The Heckler by Mike Hanson
'Spy-vs-Spy heckling wars break out between a slacker comic and freshly sent-down Major League slugger -- disrupting the game-fixing scam of an eccentric bookie.'

The Idea of Fireflies by Don Balch + Zack Smith
At the end of humanity, Ezzy Moore manipulates 'event waves' in an attempt to free her fiance and prevent a deadly machine intelligence from taking over.

Lulu by Samuel Bernstein
As silent film star Louise Brooks attempts to juggle the demands of her director, her sexuality, and Hollywood, she takes on a role that will define her career and her life.

On the Edge (aka Speedville) by Patrick Hunt
A feisty young woman's success at dirt track racing comes with bent fenders, heartache, high-RPM conflict on and off the track, and the understanding that winners don't necessarily have to finish first.

Resilience by Lena Slachmuijilder
In war-torn Congo, a rape survivor overcomes shame and stigma to become a role model for others in similar horrific circumstances.