The Death of "Daily Variety" and the Return of "Creative Screenwriting"

Talk about yer good news/bad news! First the bad: Daily Variety, that venerable showbiz rag that informed the biz for the better part of a century, is now gone. Like The Hollywood Reporter did a year ago, the daily has ceased publication, and will be replaced by a combination of web/email updates and a weekly print magazine.

The trades, as we know them, have ceased to exist.

Now I can go on for hours about the logic of this decision. The cost of printing, paper and postage are ever-rising; the economics of a daily paper just don't make sense anymore in our bankster/military industrial complex-controlled society. Furthermore, Daily Variety by its very nature delivered yesterday's news every day. Obviously, websites like Deadline and of course variety.com and hollywoodreporter.com can be far more timely. With most of us getting our info constantly blasted at us via smartphones, a paper publication seems almost quaint.

Still, and please forgive a little rant, but this frickin' sucks. Some of us grew up with, and still love, the trades as we know them -- and that means on paper. You can't read a website on the subway or in a no-wifi zone. I like reading the trades every day over dinner and so forth. My partner and I read and talk about articles. It's fun. I can't see us doing that with a smartphone. And yeah, we can do that with the new weekly edition, but it's not the same of course, since it's not going to be there every day, now is it? There's a reason I canceled my Hollywood Reporter subscription when they went digital and switched to Variety. Now who am I going to switch to?

Well, how about CREATIVE SCREENWRITING?

And now the good news. Erik Bauer, the founder and original publisher of Creative Screenwriting and the creator of the Screenwriting Expo and the CS Open writing tournament, has just purchased CS back.

As many of you know, both Creative Screenwriting and Script magazines also ceased publication last year (are you sensing a trend?) Creative Screenwriting had seen the brand get tarnished a bit in recent years, as management tried to keep the ship afloat without much success;  unfortunately, they couldn't make good on some promises in the final year or two. It was a sad end to a once-great magazine and platform for screenwriting education.

Not one to let his baby get folded, spindled and mutilated, Bauer has stepped back in and seized the reins. He plans to analyze the business carefully, then implement initiatives to revitalize the brand and hopefully rebuild any burned bridges.

What does this all mean for screenwriters? Is the Expo coming back? How about the magazine? Bauer says that right now the focus will be on rebuilding and restoring the website; he'll be making decisions on when/how to proceed with the Expo and the magazine in the future. Clearly, it's a brave new world out there, and online rules the day. Bauer wants to proceed carefully and make sure that CS will be as innovative in the new media space as it was almost 20 years ago when it became the very first print publication about screenwriting.

As a long-time columnist for Creative Screenwriting, I'm excited for the future and wish CS the best moving forward. The best is yet to come!

Cardin' It Out Old School-Style

TWISTED is a messed-up horror/time travel movie written by Tanya Klein and yours truly, to be directed by LIBERATOR director Aaron Pope. For the last six months or so, we've been developing this as Coverage Ink's first feature film, which we plan to shoot this fall. We're pretty pleased with the script, but there was something in Act 2 that was just not sitting right. The script's only 100 pages, yet it felt like maybe it's running a bit long. But why/how/where?

We narrowed the issue to the end of Act 2. A certain ennui was creeping in there, a feeling of enervation. But in scrutinizing our structure, it looked spot-on; and every scene felt necessary and important. We couldn't cut anything without wrecking the delicate chain-of-dominos structure. That's when I realized that we needed to go back to basics. Time to break out the ol' index cards.

Of course, first I tried the index card feature of Final Draft. It's pretty cool that with a press of a button, you can have ready-to-print mini versions of all your scenes. Problem is, they're not color-coded (I always like to color-code my cards based on character so one can quickly see if a character is off screen for too long or hogging too many scenes in a row.) Easy enough to fix with markers, but the real issue is, FD's cards just give you a snippet of the dialogue at the top of each scene. I wanted PROPER index cards, you know, which list the important plot events in the scene at a glance. And so for the first time in probably ten years, I ripped into a pack of actual index cards (cutting them in half because they were too freakin' big) and carded out Act 2.

A couple things popped out right away. An important cutaway suggested itself for a character we hadn't seen in a while; another two scenes felt like they could easily be consolidated into one. But it wasn't until Tanya and I went over the cards scene by scene that lo and behold, we found The Issue.  Around page 70 or so, our protagonist has rescued her three siblings -- uniting the beleaguered family for the first time since they were taken prisoner. From here there was about 15 pages of them being pursued and then finally taking out the henchmen before rushing into act 3. Tanya quickly sussed out that we don't need any of that. With one fell swoop, six index cards went away. We cut right from the reunification scene to the siblings taking out the henchmen. It worked perfectly. That cut probably saved us thousands and lopped a couple days off the schedule. And when you're shooting the thing yourself, that's important as hell. But even better, we solved the problem that had been bugging everyone and kept our intensity level high right into the end of the second act.

Sometimes I think when you've been doing this for a while, you kinda start to think you know everything. "Yeah, I know structure; I know the Save the Cat! beat sheet, I know the UCLA method and Writer's Journey/Joseph Campbell and blah blah blah..." You think you can take shortcuts. But when push comes to shove, some damn index cards and markers got it done where two smart writers who know all this stuff backwards and forwards could not.

Deal the cards, my friends!

WRITERS ON THE STORM VI QUARTERFINALISTS

Hi, folks! We proudly present the Writers on the Storm Quarterfinalists for 2013. This list represents approximately the top-scoring 10% of our submissions for this year. We'll be sending out the feedback forms over the next few weeks via e-mail. If you have not received yours by month's end, please check your spam folder, and then email us at writerstorm@gmail.com. Up next: The SEMI-finalists (top 50) coming April 1st. Thanks, everyone, for participating!

A Rising Tide by Chris Knight

All God's Children by Natalie Hanson

An Atom of Freedom by Yehuda Yaakov

The Basement by Dawn Marie Guernsey

The Bloodline by Christine Feldman

The Bond by Kim Putman

Bullets for Silverware by Jim Antonini

Clouds of Sorrow by Jack Davidson

The Contestant by Allen Hahn

The Deal by Brian Fox

The Devil Knows Your Name by Malibo Jackk

Diamond Jim and the Blue Rose of Brazil by Carl B. Clark

Due Process by Shaun Raad

Faking It by Scott Taylor

Game On by Hamilton Mitchell

The Guide by Henry Radoff

The Heckler by Mike Hanson

How Deep Is Your Love by Noga Pnueli

The Idea of Fireflies by Don Balch + Zack Smith

The Last Lifeboat by Luke Yankee

Live from the Milky Way by Joe Borriello

On the Edge (aka Speedville) by Patrick Hunt

One Bad Day by L.E. Bond

One Night Stan by Tony Boland

The Orchid with the Petals of Velvet by Justin Kosch

Passing Through by Robert G. Rhyne

The Plutonium Blonde by John Zakour

Probable Cause by Shane McCabe

Reverse the Curse by Steven D'Arcangelo

Ride to Vengeance by Dave Vaughan

The Rim Of The World by Bettina Moss

The Savior by Wade Ballance

Settling the Books by Russ Meyer

Sins of the Father by Randy Oliver

The Something by David Hudacek

Stay (aka Layered) by Jocelyn Osier

The System by Amy Whittenberger

The Taloquan Network by Robert Hestand

Theatre of Death by James B. Saunders

Theory of Everything by Tim McSmythurs

The Tiniest Prince in a Big Galaxy by Joe Borriello

Tranquility Base by Daniel Turkewitz

The Undeflowered Maiden by GK Noyer

Under Erciyes (Under the White Mountain) by Janet Ritz

By the Book by Robert Kuang

Cass McGhee is a Werewolf by Dorian Hess

Freebird - And This Bird You Cannot Change by Simon Kay

Goth and Jock by Jay Joseph

Milltown - The Devil We Know by Bob Gookin

Path by Michael A Wright

The RetroCog by Steve Morris

The Sensualist by Suzanne Griffin

The Thief and the Prophecies by Barry Leach

The World by Kathleen Cromie

Why are we posting about someone else's contest? Because it's the Tracking B TV Contest. And the late deadline is March 3rd.

It's expensive to enter, and there are no prizes per se. So why the heck should you enter? Because Tracking B is a real-life industry tracking board subscribed to by movers and shakers. They have a STUNNING success rate. A top-tier TV industry panel reads the entries, and every year there's another success story or two -- people getting signed, staffed, and so on. It's fricking remarkable. This is one of the few contests (other than our own) that we consistently recommend year after year as being worth the dough.

Now get a load of their industry panel: 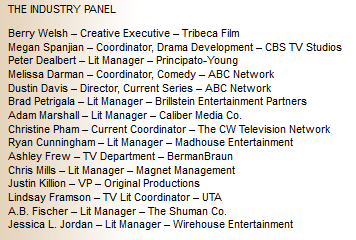 Get one of these folks on your team and the picture changes radically. Check out their website for the the skinny on their incredible "track" record. So if you've got a pilot, get over to TrackingB.com before it's too late. You may very well be glad you did. Good luck.

Writers on the Storm Quarterfinalists This Monday!

It may be down to the wire, but we hope to post the full list of WOTS VI quarterfinalists this Monday, March 4th. This includes the previously posted QFs from the Coverage Ink side (minus two fellows we sadly had to disqualify, Karl Schiffman and Robert Chomiak, for both having career screenwriting earnings in excess of $10,000 - great writers both, but rules is rools) and everyone else who entered on writerstorm.com or WithoutaBox. The quarterfinalists will represent roughly the top 10% of our submissions.

There's going to be shouts of joy, tears, cursing, frustration -- the works. We know. We've all been there. Rejection is one of the most "fun" things about screenwriting, and even after two decades in Hollywood, every "pass" still pains me a bit. For for the vast majority of you who will not make the cut, I hope the feedback forms will give you an idea how close to the mark the reader felt you were and what areas in particular need the most TLC. Sometimes the difference between a pass and a consider are a few tweaks you can make in an afternoon.