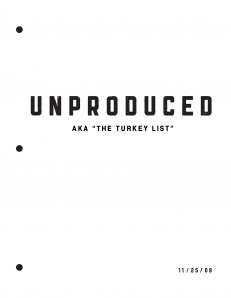 Our anonymous pal over at the hilarious website The Hollywood Roaster has compiled a list of the most dubious, questionable or flat-out lame specs to hit the town this year, as voted on by development folks. While we here at CI will not make any judgments on the material therein, it is worth noting that a few of these did actually get set up. Browse these and have yourself a good chuckle and a head-scratch. Check 'em out right HERE.
Posted by Admin at 10:43 AM 1 comment: 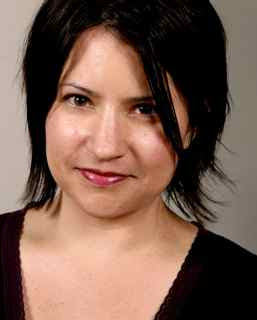 Note: Jen also advises us the Disney fellowship program for features has been discontinued. Henceforth, the Disney/ABC Fellowship will concentrate on TV. Obviously the economics of it were a factor. What a shame.
Posted by Admin at 8:11 PM 1 comment:

Writers on the Storm top ten screenplays of 2009... congratulations, guys! WINNERS will be announced 12/7/09. Thanks, everyone!

Showdown of the Godz now on DVD 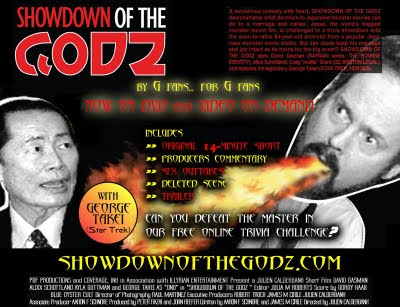 It's finally here! Coverage Ink's very first production SHOWDOWN OF THE GODZ is now out on DVD. Featuring the legendary George Takei, GODZ shows what an unhealthy devotion to Japanese monster movies can to marriage, a family and a career. This is a comedy for sci-fi geeks everywhere and anyone who's ever suffered for their passion.

The GODZ special edition features a commentary track from three producers, effects outtakes, deleted scenes and of course the original 14-minute film which wowed 'em at Comic-Con, G-Fest, Monsterpalooza and a host of festivals. Only $9.99 -- a great gift for any Star Trek, sci-fi or Godzilla fan!