Well, I guess the process works, because two of our top ten were just announced today as Slamdance top scripts also! Slamdance selected MOONBEAM FISHERMAN by John Dummer, about a teenage boy and an old fisherman learn to deal with loss in 1969, as a top ten finalist. And honorable mention went to FAUSTA by Dalisia Mendoza, about a female Army captain who suffers from recurring dreams after an IED detonates beside her vehicle in Iraq -- and discovers a life lived a hundred and fifty years in the past.

The best of the best! Congratulations to the ten writers below who have slogged their way through the trenches, survived withering competition and emerged from the battlefield victorious! These ten scripts we have judged to be the cream of a crop of over 1,400 submissions. We bask in their awesomeness.

Contest winners will be announced 11/24.

The 2008 Writers on the Storm top ten scripts are:

Belfast Boys by Heather Upton
Black Damp by Carla Robinson
Cage by Philip Landa
Canaries by Craig Cambria
Colossus by Jason Kent
Fausta by Dalisia Mendoza
In the Middle of Greatness by C.J. Liao
Link by Jerry White
The Moonbeam Fisherman by John Dummer
Upon This Rock by Tim Mangan

Nice work, all of you. Great things are surely to come in all of your careers.
Posted by Admin at 11:37 AM 2 comments: 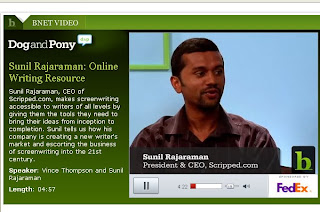 Check out this 5-minute interview with Scripped.com CEO Sunil Rajaraman with dogandpony.com on bnet right HERE. With over 8,000 users and partnerships with industry leaders like Movie Magic Screenwriter and Coverage, Ink (hey, that’s us!) Scripped is quickly taking the world by storm. If you’re still writing scripts in MS Word... dude! Check out Scripped.com. Online screenwriting software, and it’s free!
Posted by Admin at 2:09 PM No comments:

From "Taco!" to Mexico 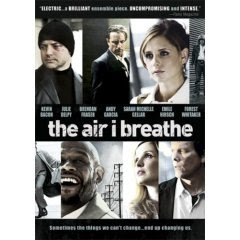 The Screenwriting Expo is rolling back into the LA Convention Center next month, and I know I’ll see plenty of you guys there. As always Coverage, Ink will be coordinating the CS Open live writing tournament. Can you write a killer original scene, on the spot based on parameters we give you? You have 90 minutes and a pencil. Go! If you’ve never tried your hand at the CS Open, I urge you to do so. Thousands of dollars in prizes plus fun and learning await. And every scene is critiqued and graded by the Coverage, Ink team. Check it out HERE. And check out the interview with CS Open winner Bob DeRosa to see what he’s been up to!

“I moved to L.A. summer of 2001,” DeRosa recalls. “I wrote a spec called ‘The Hatchet Club,’ a horror/action movie that got me an agent--but no one bought it. I got over 40 meetings out of it though, and wrote (unproduced) movies for Revolution and New Regency.”

DeRosa’s career got a little bump after “Taco!” DeRosa loved the scene so much he reworked it into a short. “My good friend Kevin Ward directed ‘Taco!’ with Charles Robinson (Mac from ‘Night Court’) starring. “Taco!” is currently on the festival circuit and won an award at the SoCal Independent Film Festival. But it wasn’t until DeRosa began a collaboration with “The Air I Breathe” director and creator Jieho Lee that things kicked into high gear.

“I met Jieho when I was a programming assistant at the Florida Film Festival
in 2000,” DeRosa says. “We programmed Jieho’s short ‘A Nursery Tale.’Then after I (moved to L.A.,) my friends put on an evening of my one-act plays called ‘Brutally Yours.’ Jieho came, really enjoyed my dialogue, and asked me to collaborate on the script that would become his feature directorial debut.”

“The Air I Breathe” was shot entirely in Mexico and features four vignettes, each involving a character named after a specific emotion. “The storylines eventually intertwine, with a transcendent payoff,” says DeRosa. “(It’s) ‘Crash’ meets ‘Pulp Fiction’--a spiritual and romantic crime drama.” With his aptitude for shorts, DeRosa embraced Lee’s ensemble piece. “You have such a limited time with each character, it forces you to make every scene as rich and meaningful as possible.”

Once they had a script, Lee and DeRosa set about packaging. “There were times when it felt like we were the hottest project in town,” DeRosa recalls, “and then all of a sudden, our momentum would disappear. It was two years of pure craziness and unpredictability.” But once investor Nala Films came aboard and a start date was set, DeRosa found actors drawn to Lee’s vision. “Every actor that said yes increased our momentum.”

DeRosa is hoping “The Air I Breathe” will open doors for studio assignments. “I’d love nothing more than to collaborate with Jieho on a cool comic book adaptation.” And DeRosa has words of advice for other CS Open participants who might enjoy sipping tequila in Mexico with Sarah Michelle Gellar and Julie Delpy: “Tell stories that matter to you. You want whoever reads it to FEEL about it the way you feel about it. And make sure that every character in your script has their own unique voice and moments of silence as well. We must’ve done something right, considering our amazing cast.”

Check out THE AIR I BREATHE on Amazon.com.
Posted by Admin at 12:36 PM No comments: 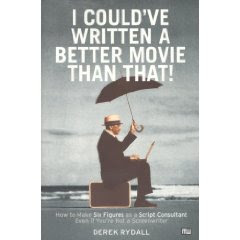 My only real quibble with ICWABMTT is that it may be setting readers up with unrealistic expectations. Rydall contends that script analysis is a burgeoning field, but in my opinion, we’re glutted with coverage companies and script analysts already. Breaking in right now--and making six figures--would be a real trick. On the other hand, is this book’s approach really any different from a book that promises to teach you to write a million-dollar spec? Both set the bar high and show you how to get there. The fact that most folks never will is of less importance than the journey and the knowledge gained along the way. To use coverage parlance, I’m giving this book a STRONG CONSIDER.
Posted by Admin at 12:14 PM 2 comments:

Writers on the Storm feedback

Hi Stormies! Just a quick note to let y'all know that the feedback started going out this week, and it's going out in clumps. So we're getting a lot of e-mails from folks wondering why they only got one set of feedback but they submitted two scripts, etc. So just sit tight as there are a lot of forms to get out and the process takes a while.

We should be done by mid next week (10/15 or so) so if any of y'all are missing feedback still at that time, e- me at writerstorm@gmail.com. Thanks again everybody for participating and let's root on those top 50!

UPDATE: It's 10/14 and we're still sending out feedback. It's a big job and will likely take till the end of the week, so please bear with us!
Posted by Admin at 12:38 AM No comments:

Writers on the Storm 2008 Semifinalists!

HUGE CONGRATS to our top 50! One of the folks below is going to have 10 grand in his or her pocket before long and gobs of cool prizes and shwag! This list represents what we judged to be the top 50 scripts submitted to the contest through both Coverage, Ink and directly to Writers on the Storm in 2008.

Feedback forms should start going out shortly, so if you do not get yours by 10/10 please contact us at writerstorm@gmail.com. TOP TEN to be announced 10/27.

And now without further ado...

2008 WRITERS ON THE STORM SEMIFINALISTS

A Poem for Silvertown by James Schannep
Adversity by Andrew Sessions
Avalon Bound by Brandon Rosin
Back from the Dead by Art Blum
Belfast Boys by Heather Upton
Beyond the Horizon by George Ferris
Black Damp by Carla Robinson
Blood Money by Michael Eging
Blowback by Jeff Travers
Blue Bloods by Lucy Cruell
Bury Me in Fire by Odin Shafer
Cage by Philip Landa
Canaries by Craig Cambria
Center of Fortitude by Mark Eaton & Stacy Dymalski
Colossus by Jason Kent
Cross of the Savage by Joe Crouch
Edgewater by Patrick Nicholas
Eurabia by Joe Flood
Every Dog Has His Day by Dov Engelberg
Evicting the Wyatts by Josh Lane
Fausta by Dalisia Mendoza
First Dog by Bryan Stoller
Free Skate by Caitlin McCarthy
Global Swarming by Diana Ohlbaum
Hart Crane by David Kaneen
Honor Among Rats by Adam Perin
In the Middle of Greatness by C.J. Liao
Ironman by George Gier
Lifer by Inon Shampanier
Link by Jerry White
Louis by Alexander Valhouli
Martyr by Brian J. Martin
Mistress of the Sea by Rebecca Howland
My Hero by David Norwood
Perfect Form by Randy Moore
Savage by Barry Levy
Sea Fever by Richard Guimond
Silver River by Marnie Collins
The Baby Whisperer by Scott Clevenger
The Expired Man by Kevin McAllister
The Fraternity by Jeff Wiegand
The Knuckleballer by Michael Murphy
The Lost Kids and the Unwritten Language by Felipe Cagno
The Moonbeam Fisherman by John Dummer
The Pirate Queen of Connemara by Suzanne C. Doherty
The Shanghailanders by Craig Rosenthal
Trauma Junkie by Tom Hobbs
Upon This Rock by Tim Mangan
Variance by Stevie Bloom
Women In Pants by Stan Himes
Posted by Admin at 10:16 PM 2 comments: