THE 5 BEST WAYS TO *LOSE* AN AGENT 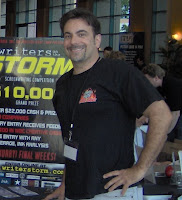 Got agent? Good. Now can you hold onto him? Hmm...

Congratulations! You’ve been lucky enough to secure agency representation or literary management. Someone with actual industry juice has decided to take a flier on you, either as a hip-pocket (unofficial client) or as a full-fledged signed client. Guess what? You’re gonna blow it. yep, sorry folks, but we’re writers, and self-destruction is what we do. Sooner or later, you’re probably going to inadvertently screw yourself like some mad well-hung contortionist. The following tidbits come from my own experiences as well as from years of talking to the top reps in town for my Agent’s Hot Sheet column. And so in an effort to prevent you from committing career hari-kiri, we present to you the five best ways to lose an agent.

1) BE A PEST. Agents in particular, and managers to a lesser extent, are very busy people. An agent might have 80 to 100 clients. That’s a LOT of people with their own needs and neuroses. Given that, you might think you need to be a squeaky wheel to get any grease, right? BZZZ. The correct answer is: agents hate being bothered. If you’re calling your agent four times a week, he’s going to label you “high maintenance,” and before long his assistant will be given direct orders not to put you through. Needless to say, that’s a one-way ticket to losing representation.

So when is it okay to call your agent? Obviously, when you have business to discuss, a story or career concern -- anything legitimate. And by legitimate, I don’t mean spending an hour to think up some legitimate-sounding excuse to call your agent, the real goal of which is to ask him if there are any more people he can think of to send your script that everyone’s already passed on to. Beware the “just calling to check in” call. If you’re going to do that, make sure you have something of value to tell the agent, such as a few new loglines to run by him.

That said, if a month goes by and you haven’t heard from your agent, pick up the phone. There should always be some movement on something – whether it’s simply to find out who’s passed on what submissions or to give him a status report on how the new spec is coming. So control that neediness and desperation, folks! The relationship is firing on all cylinders when the agent looks forward to taking your calls and when you speak, there’s momentum and business discussed.

2) INSIST THEY ACTUALLY WORK FOR YOU. This sounds like a flip comment, but it’s really not. Here’s the thing – agents hate having to actually do work. It’s a pain in the ass to make a lot of calls, and especially to break a new writer. The truth is, an agent is going to do as much work for you as he feels is warranted. This is a hard lesson, but here it is: if the agent is not feeling your script, he may slip it to a handful of trusted producer friends for an opinion. If those five creative executives are not interested, you’re done. No amount of script revisions or suggestions of other places they can send it to are going to reenergize your rep. He rolled the dice and crapped out – on to the next. Write a new spec.

This is a staggeringly hard lesson and one we writers hate. But it’s reality. If you push it, and demand they actually work for you, guess what? Yep, you’re now “high maintenance.” (See above.) And this also applies to starting a new relationship with an agent. If you’re very forward the first time you meet and tell the agent, “I’m looking for someone with hustle who’s really going to work for me,” you’re done. Sounds crazy, right? But there it is. Agents want you to be easy-going, easy to work with, but also savvy about the business (like they are.) If you’ve got a great idea about an attachment or a marketing strategy, then absolutely lay it on him. But if you insist he send your spec, which just went out and racked up 25 passes, to another 25 companies, you’re digging your own grave. Let them call the shots and accept it. If you’re lucky, your agent will be a go-getter and will be out there hustling for you without you having to tell them. Of course, he could just be a lazy bastard, in which case, you’re pretty much effed either way.

3) SHOP AROUND FOR OTHER REPRESENTATION. This is one I did myself. I was repped by one of the big 3-letter agencies some time back, and I did not believe at the time that my agent was doing anything for me other than giving me lip service. When I’d ask him to send out a script, he’d make excuses. (This was before I learned about coverage, and that the real reason the agent wasn’t lifting a finger was because he had gotten some shitty coverage on my scripts. He had faith in me as a writer but for whatever reason was incapable of giving any constructive criticism that would help me improve.) This went on for the better part of two years until I finally got fed up. So what did I do? I started contacting other agencies. Naturally, I led with, “Hi, I’m Jim Cirile, and I’m currently repped by so-and-so from XXX.” See if you can guess how long it was before this got back to my agent?

You may think, “So what if it gets back to him? You’re dumping him anyway, right?” The problem is twofold. Firstly, this tells the town that if they do take you on, you’ll likely do the same thing to them someday. Pass. Secondly, it creates acrimony with the current agent, whereas perhaps the separation could have been more amicable and left the door open for interaction in the future. Ex-agents are like old significant others. Leave on good terms and keep their numbers for a possible future booty call as needed.

So how do you get new representation if you’re unhappy with your agent? The best way, of course, is you’re being courted by someone else. In that case, you’ve got some heat, you’re in demand. Agents poach clients from each other all the time. If you have no heat, you can try just having a conversation with your agent to see what the roadblock is. Why is the relationship breaking down? Perhaps, as in my case, the agent was not forthright about why he’s not working for you. You can always ask if maybe there’s a new assistant about to be promoted who’s building his client list, and if the agent would be interested in placing you. That way he can still be on the team (and make a commission) if you get work without actually having to DO any work. If you’re that easy-to-work-with, productive client, they’ll do that rather than lose you.

4) BE UNPRODUCTIVE. This one seems pretty obvious, right? You’d be amazed. As lazy as agents can be, we writers can be even lazier. Nothing gets an agent less excited than having a client take two years to give them anything new. There’s only so much mileage they can get out of your back catalog. Eventually you need to move on and actually produce something they can go sell. No one wants to rep the writer who never has anything new except excuses.

But writing a brand-new script from scratch is a pain in the ass, and who wants to do all that work, right? This is where a little psychology comes into play. By involving your agent in the process from the get-go, he will become invested in it and feel ownership of it -- and that means he’ll work significantly harder to get it set up than a finished script he simply read. If an agent feels his fingerprint is on the material, that he helped develop it, he’ll work that much harder for it, and HE’LL even call YOU regularly to monitor its progress. The technical term for that is, I believe, “lighting a fire under your ass.” Your productivity will go through the roof if you know you have an agent excitedly waiting on the material and helping you when you paint yourself into a corner in Act 2. So I propose soliciting as much input in the spec development process as he’s willing to offer from day one as a way to adrenalize your process and keep your agent stoked.

5) THE NAME’S DONNA. PRIMA DONNA. You are not a director. You’re a lowly writer. You do not have, nor will you ever earn, the right to be an asshole. If you think just because your spec sells and you land a big studio assignment that you can cop an attitude, think again, pal. Heat dissipates, and three years from now you’re going to be the struggling has-been whose calls no one returns. A word to the wise :)
Posted by Admin at 11:25 PM