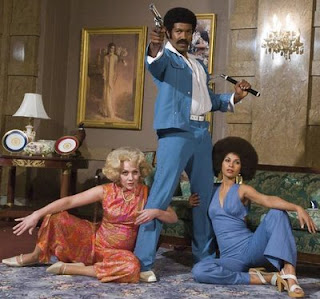 We LOVE this! "Black Dynamite," a fake '70s blaxploitation film written by Michael Jai White ("Spawn,") Byron Minns and Scott Sanders, was snatched up by Sony Pictures at Sundance. This is particularly exciting because we've been tracking this film for a while and have known about it since inception. Michael Jai White has been on a multi-year crusade to get this puppy made, and the payoff is indeed sweet. Congratulations, Michael!

This from Nikki Finke's Dateline Hollywood:

I told you last night that the blaxsploitation spoof Black Dynamite was "an instant cult hit" at Sundance following the cheering at its packed midnight screening at the Library last night. Now it sold to Sony for $2M -- the second purchase at the film festival and the first overnight sale. As the film premiered, I hear Sony Picture's Worldwide Acquisition Group led by Peter Schlessel, and Endeavor Independent's Graham Taylor, Alexis Garcia, Mark Ankner and Liesl Copland repping the producer, negotiated in multiple rooms back at the agency's condo the rest of the night. Not only does the pic have a North American theatrical release commitment for this year, but also franchise expectations. "Astounding in a tough market for a little film without high-profile cast. It's a cinderella story," an insider tells me.

Check out the hilarious trailer HERE!
Posted by Admin at 2:56 PM