Slack Like U Mean It: Top PC Games for Writers 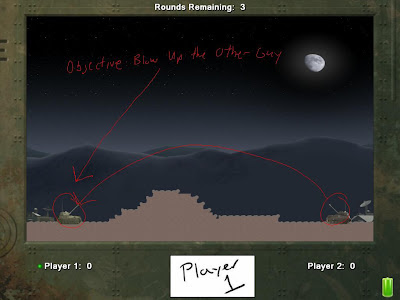 Hold on thar, Babalouie. This isn’t going to be one of those articles that talk about the great writing that’s going on in video games, or about how some screenwriters are transitioning into game writing and how cool that all is. Yeah, whatever. While some of that is true, by and large, games still can’t really tell a story as well as a movie or TV show. Sure, there have been plenty of games that are well-written, going all the way back to the ground-breaking Infocom and Trillium text adventures, most notably the HITCHHIKER’S GUIDE TO THE GALAXY game, written by Douglas Adams and Steve Meretzky, (a free version of which -- now with graphics -- can be found HERE, and the amazing ancient Commodore 64/Amiga game FAHRENHEIT 451, cowritten by Ray Bradbury himself.

But this is about kicking back and letting off a little steam. I’ve been a gamer for over 20 years, and as a writer/gamer, I have certain benchmarks that I demand of a game for me to waste my time on. First -- it needs to be smart. Doesn’t mean it needs to be literature, but it does need to be captivating and not an insult to my intelligence. Second, it needs to be easy to learn. I do not have the time to slog through a 100-page manual or learn a million different attack combinations. The best games have built-in tutorials or are intuitive. Third, they need to be FUN. That means ***Save Anywhere***. Any game that forces you to go back and do the same thing over and over until you execute a certain jump or figure out the trick to defeating the monster, yer outta there! (I’m lookin’ at you, GRAND THEFT AUTO series.) Fourth, we’re talking computer games only, not console, since while yes, GEARS OF WAR kicks serious butt, many console games still can’t Save Anywhere; plus many writers don’t own a console, but we all have a computer. And lastly, they need to be self-contained. I can’t stand massively multiplayer online role-playing games. Too demanding of my time. No offense to all you W.O.W. & STAR WARS GALAXIES fans, but the time commitment necessary to play MMORPGs, not to mention the monthly subscription cost, eliminates them from consideration. The games I return to are single-player only. Plus, as a writer, I like to isolate in my little stalagmite-encrusted cave and play against AI, not against unpredictable and irritating real-life human beings!

As I got to thinking about some current and past favorite time-wasters, I realized they fell into two categories -- big budget A-list titles with a real story and state of the art graphics -- and casual games, suitable for playing just before bed for a half hour to wind down. And so I present a wildly biased and incomplete list of games, my favorites, that could be of interest to fellow writers.

(Oh, and sorry, Mac owners, most of these are not available on the Mac -- which is why I bailed on Apple 4 years ago. OS X is great, but what the heck good is it if you can’t play TITAN QUEST on it?) 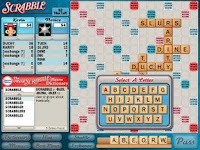 8) SCRABBLE by Hasbro Intercative. The classic game with well-executed computer AI. Plus available on Mac! You can pick this up used for about 5 bucks on eBay. You can play against up to 3 other AI opponents and set the skill level for each. Indispensible! No writer should be without this one. Improve your vocabulary; free your mind – the rest will follow.

6 and 7) THE ORANGE BOX by Valve Software. The best deal in PC gaming history, developer Valve includes not one but THREE amazing games in one box—cartoony but fun online role-playing game TEAM FORTRESS, and the real stars of the show -- HALF-LIFE 2 episodes 1 and 2, and PORTAL.

HALF-LIFE is the most successful PC game ever, and HALF-LIFE 2 won more Game of the Year awards than any other game in PC history. The two sequels included in this package are story-driven first person shooters where you play a freedom fighter who teams with a cute AI-controlled female sidekick and a robotic dog to take out an alien invasion. Easy to learn and challenging but not frustrating, the Half-Life series is well-written and about as good as it gets. Even better, the graphics engine delivers fantastic cinematic visuals even on mid-range computers. You ARE playing a movie. 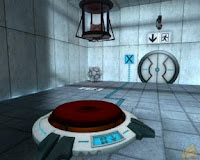 To ice the deal, Valve blew everyone’s minds by including PORTAL as a freebie in The Orange Box. A fiendishly clever and unexpectedly hilarious puzzle game, you play a gal trapped like a rat in a maze, your only tool -- a gun that can shoot dimensional gateways in the walls. This game will change the way you think about space and get you thinking in three dimensions -- a real blast. Pay attention to the snarky and delightfully unhelpful voiceovers throughout. Wonderful!

Oh, did I mention this box also includes the butt-kicking Game of the Year HALF-LIFE 2? Check it out HERE: http://orange.half-life2.com/ 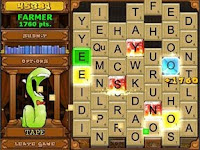 5) BOOKWORM by Popcap Games. I have been playing Bookworm for 4 frickin’ years. It is the crown jewel in Popcap’s casual game crown. Gameplay is as simple as it gets. You are presented with a grid of letters. Spell words to get points -- the longer the word, the more points you get. But beware the burning tiles! There is nothing quite like the feeling of spending six bloody months playing the game, building up a score of 28 million or so, only to suddenly have a blizzard or burning Q’s rain down on you and realize that you are done for, your championship game doomed. Yet you will find yourself starting all over again regardless. Curse you, BOOKWORM! Cheap, fun, and can run on any computer. If you’re a writer and don’t have BOOKWORM, you’re missing a great way to build your vocabulary and while away your life. www.popcap.com

4) BIOSHOCK by 2K Games. Gripping and well-written, BIOSHOCK casts you as a survivor of a futuristic art deco underwater city from the ‘50s on its last legs and overrun by splicers -- former humans who have mutated themselves rather unpleasantly through genetic manipulation. BIOSHOCK features an enthralling, twisting, well-written story that sucks you in, but what really gets you about this game is the art direction, about the Best Ever in a game. You WILL believe you really are in this flooding, dying city. It’s creepy and sick and scary. And it has adventure game components that keeps the gameplay interesting -- you’re not just shooting stuff. But you’ll need a pretty beefy computer to run this one will all the visual bells and whistles. http://www.2kgames.com/bioshock/ 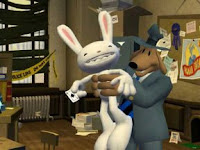 3) SAM & MAX SEASON ONE by Telltale Games. An old school Lucas Arts-style graphic adventure game. Sam is a gumshoe private eye dog, and Max is his insane rabbitty-thing companion. Both are packin’. Do you like wacky cartoon humor with a slight infusion of implied (but not actually seen) extreme violence? (Fear not -- the game stays solidly in the PG realm. Mostly.) The colorful, cartoony graphics and bizarre logic percolating here make this series a hilarious choice suitable for (almost) the whole family. Sort of. Don’t be put off and think this one’s a kiddie game. There’s fantastically funny, demented writing at work and some fiendish puzzles. Play an entire episode for free here: http://www.telltalegames.com/community/blogs/id-268 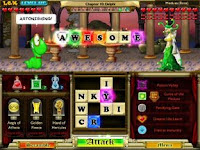 2) BOOKWORM ADVENTURES by Popcap Games. The people behind the insanely addictive BOOKWORM strike back with a game that in many ways improves on the original by adding an adventure game component and a silly (but very amusing) story. As Lex the Bookworm, you go on a series of quests fighting mythological creatures by spelling words. As in BOOKWORM, the bigger the word, the more powerful your fu. A truly great game for writers, the only letdown here is the actual game is kinda short. You can finish it in about 15-20 hours. But there is replay value here, because you unlock minigames (one of which is just like GSN’s “Lingo”) and you’ll likely finding yourself playing through the whole thing again from scratch when you complete it. www.popcap.com 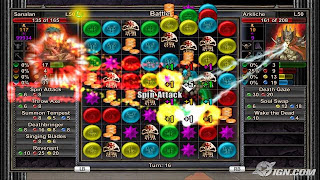 1)PUZZLE QUEST by Infinite Interactive. Greatest game ever? Probably not, but certainly the greatest match-3 game ever. Just try to stop playing. The execution of PUZZLE QUEST is genius. On the surface, it’s a simple match-3 game. We’ve all played these to death (you probably have BEJEWELED on your cell phone.) But unlike BEJEWELED, which quickly gets L-A-M-E, this one leaves the ‘suck’ out in the mudroom by implementing an actual storyline and mini quests in a fantasy role playing game context. All the combat in the game is done by matching 3 or more tokens on the battle grid, but you win gold and experience points from your battles which you can use to buy spells, weapons, fortresses and level up your character. A match-3 game where you can siege enemy cities? Believe it. Best of all, the depth is amazing. I’ve been playing it for 2 months now and there’s no end in sight. At $20 and playable on even the puniest PC, this one is a solid choice for pretty much anyone. www.bigfishgames.com

Last but not least, here are 9 Honorable mentions.

WORD WHOMP. A fairly weak entry but fun for word puzzle enthusiasts. You’re given 6 letters and have to spell as many words from them as you can before you run out of time. More addictive than it should be and great if you only have 5 minutes. www.bigfishgames.com

PREY. A big-budget shooter now available as a download on Steam.com for $20, this game features great dialogue, a Native American protagonist and some of the creepiest alien environments I’ve ever seen. But the game’s real special sauce is your ability to walk up walls and on ceilings, which is a trip and a half. http://www.steampowered.com/v/index.php?area=game&AppId=3970

SYSTEM SHOCK 2. The original bad-ass sci-fi horror role-playing game. The graphics are kind of dated now, but this one set the standard few have lived up to. Truly creepy and addictive. BIOSHOCK is a “spiritual sequel” to this one. http://en.wikipedia.org/wiki/System_Shock_2

DREAMFALL. A wonderful time-traveling adventure with a female protagonist. Great graphics and a compelling story. A great entree into gaming especially for ass-kicking adventure-loving gals. www.dreamfall.com

THE INDIGO PROPHECY (FAHRENHEIT in Europe.) Notable for voice work by our pal David Gasman, star of SHOWDOWN OF THE GODZ, this is a cinematic action game unfairly overlooked by many but remains a gripping and well-written action/adventure story worth your time. You can find this one for 10 bucks on Amazon. http://www.atari.com/indigo/

POSTAL 2. Most Messed-Up Game Ever. This game infamously received a 0 Stars rating from Computer Gaming World magazine, who completely missed the point. This game features sick, dark, laugh-out-loud humor and completely over-the-top violence. If the idea of trampling Gary Coleman to death with a herd of elephants and attacking innocent people with a diseased cow’s head is not your idea of fun, stay away! All others, check your ethics at the door and have a blast. www.runningwithscissors.com

TITAN QUEST by THQ. Notable for its script written by none other than BRAVEHEART writer Randall Wallace, TITAN QUEST casts you as a male or female warrior or magic user in ancient Greece and sets you off on a series of, well, quests, to save the world from the scourge of the Gods. While the story and mythology are well-handled, this one’s all about the action. Huge battles, great graphics and easy point & click gameplay make this a wonderfully fun black hole which dutifully sucks your life away. Make sure you buy TQ packaged with the Immortal Throne expansion pack, which fixes some of the niggles from the original game and adds a ton of cool new features. www.titanquestgame.com