WHO WON? WHO WON? AND WHO'S NEXT? Hey, did ya know we're raffling off two free entries into Writers on the Storm every month until the end of the contest (7/31)? It is true! Here's how it works: email us at coverageink@aol.com and put "STORM RAFFLE" in the subject line. We will then randomly select (using random.org's random number generator) two folks and notify you by e-mail. And sure, you can try again if you entered last month! Just email us again. This month's winners are: Eleanor Rogers and Christian Wagner. We've already contacted them and told them how to enter. Two more raffle winners will be selected next month. Will you be among them?

HOW IT'S DONE. Congrats to Andy Maycock, the very first Quarterfinalist in Writers on the Storm 2011! Maycock submitted his screenplay Getaway, Inc. to Coverage Ink for evaluation, and it scored a 'consider' for script. That makes it an automatic quarterfinalist (appx. top 10%.) He can now either let it ride, or he can resubmit a polish draft based on the coverage, theoretically bettering his odds. But one way or another, his quarterfinalist status is locked in. Way to go, Andy! Remember, only the folks who send their scripts to CI for coverage find out their status and have a chance to polish those scripts and resubmit. If you enter the contest directly at writerstorm.com, you have to wait until after the end of the contest (7/31) to find out if your script made the quarterfinals. Don't start counting that prize money yet, Andy... you've got an full-on assault coming at you. Stand tough, my brother! And congrats again.

LIBERATION COMMENCES. Principal photography on Coverage Ink's second film, THE LIBERATOR, began 5/30 in Los Angeles and wraps 6/25. Liberator stars Lou Ferrigno as a disgraced, washed-up superhero whose black ops past exacts a heavy toll on his life and everyone around him. The 15-minute presentation pilot also stars Peta Wilson (La Femme Nikita), Michael Dorn (Star Trek: the Next Generation) and the legendary Edward Asner as President Whitlock. Scoring the film is Tim Wynn (Supernatural) whose work with the Skywalker Orchestra for the video game Red Faction: Guerrilla has to be heard to be believed. Liberator is written by CI's own Jim Cirile and Aaron Pope, as well as directed by Pope. Check out www.liberatormovie.com for production diaries, behind the scenes footage and more!

LET THE VOTING BEGIN! Whether or not you participated in the Cyberspace Open this year, you'll definitely want to watch the top three scenes and vote on them! Earlier this month, we videotaped actors performing the top three scenes in staged readings. Top 3 Elisa Graybill, Michael Hedrick and William Shank wrote own interprations of our scene prompt, which went a little something like this:


Your PROTAGONIST is desperate and mulling a risky proposition. Taking action could result in a personal gain to the protagonist, but at great potential cost in the form of a relationship(s). Write a scene either before or after the decision has been made, addressing it in whatever manner you like. You may use any number of additional characters you desire, and again, keep in mind SUBTEXT when writing dialogue. One other thing: your protagonist is *crazy*.

Watch the scenes at the official Cyberspace Open web page and then vote for your favorite. But remember, we're not just looking for solid scenes; we're looking to see how well they adhered to the scene prompt. The scenes are also posted on Vimeo here, here and here. Thanks, everyone, for participating. As always, it was a gas. The Cyberspace Open will be back soon for... wait for it... year ten!

3-D: YOUR 15 MINUTES ARE UP (AGAIN.) Check out this great discussion about the pros and cons of 3-D on aintitcool.com. As with all things, moderation is the key. A little 3-D every now and again is fabulous. Hell, bring on the 40-minute 3-D Imax spectaculars! But Hollywood of course has no concept of moderation, and so pretty much every single film coming out nowadays is in "3-D." I put that in quotes because oftentimes they're coverted to 3-D in post (gimmicky and lame) as opposed to natively shot in 3-D. Converted 3-D movies look like poo. Don't know about you guys, but the idea of spending an extra 5 bucks on movie tickets to have my eyeballs forced off their vertexes for two hours just doesn't do it for me. What do you guys think? 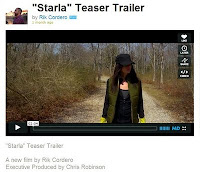 YOU DON'T HAVE TO BE A STAR, BABY. Our pal, indie film writer extraordinaire Aaron Schnore from New York City, sent along this heads-up about his latest movie:


Hey, everyone, I want to let you know that "Starla" -- a new feature film by the immensely talented Rik Cordero -- is having its world premiere on Saturday June 25th in NY. I was one of the writers. There are 7PM and 9PM showtimes (although I think the 9PM is almost sold out). The screening will take place at the Auditorium on Broadway (1871 Broadway). You can check out the teaser trailer -- and BUY TICKETS -- by going to http://www.StarlaMovie.com

"Starla" is a psychological thriller about a woman who seeks revenge on the surgeon who botched her daughter's surgery. I co-wrote the script with Rik and my longtime collaborator (and senior Coverage Ink analyst) Billy Fox. This is my second feature film with Rik, following "Inside a Change" (Winner - Best Picture; 2009 HBO NY Latino Film Festival). Billy and I also co-wrote the award-winning hip-hop horror webisode series "Rhyme Animal" (with our pal Jorge Rivera). I'm proud of this movie, but I won't lie -- writing the script wasn't always fun or easy. It's an emotional story, and writing it put me in some dark places at certain points. But it was worth it. I'm excited about "Starla", and I hope you can join me on this special night.

ADVICE FROM THE MASTER -- FREE. Speaking of Billy Fox, he wanted to share this with you all:


So I've been on a big "Rockford Files" kick the last couple weeks, and just finished plowing through the first season. I loved the writing so much that I became curious about the creator and lead writer, the late Stephen J. Cannell. Can't believe he wasn't on my radar before, as he was one of the most successful producers in the history of TV, and an amazingly prolific writer for several mediums. Check out his credits on imdb.

I've been finding lots of great interviews with him online. The best so far is the "USC School of Cinematic Arts Conversations With" series (Cannell is number 5 on the list). I strongly urge you all to have a listen on iTunes. I got tons out of it, and literally minutes after finishing it I was brimming with ideas on how to retool a script that's gone through multiple drafts over a several year period, but just wasn't knocking it out of the park.

And for those of you who don't do iTunes, watch this lovely 4:33 bit of advice on writing from Mr. Cannell right here.

GREAT AMERICAN PITCHFEST - LAST CHANCE! What mades an enormous thudding sound followed by a queasy, flatulent squish? Why, that's the sound of missed opportunity, ladies and gentlemen. The Great American Pitchfest hits town this weekend June 3-5, 2011. So you have a choice: be there, and enjoy beaucoup face time with buyers who are there expressly to try and find fresh writing voices; or give it a miss, and continue to whine that only one company out of 483 responded to your last query letter campaign. Find that inner strength to get in these people's faces and blow them away! Sign up now at www.pitchfest.com. And while you're there, stop by the Coverage Ink booth and say hi.

STC! SOFTWARE REVIEW COMING SOON. We're big fans of Blake Snyder (Save the Cat!), who left us way way way WAY too soon. Fortunately, the good folks at blakesnyder.com are keeping the torch lit. Coming soon: Save the Cat! software 3.0. We hope to bring you a full review in our August newsletter. We have been using 1.0 for two years now, and what a great tool it is. It literally forces you to think through your screenplay structure and dimensionalize your characters. Pretty amazing stuff. Well, 3.0 is supposed to raise the bar substantially. They say they've revamped everything, from the user interface to the corkboard notes to the scene cards. Oh, and they've upped the page count to 1,000, in case there's a manifesto inside you just dying to come out. Everything now intuitive and drag and drop -- so they say, but we'll be the judge of that...

ARE THEATERS OBSOLETE? No. People will always need a place to go on a date or simple to be somewhere other than home. But DVDs are probably going the way of the archeopteryx sooner rather than later, in the same way that digital music is slowly killing CDs. I mean, you gotta love VOD (video on demand.) The idea of going to a store or even a $1 kiosk to rent a flick seems so quaint when for a low monthly fee you can watch almost any movie or TV show instantly. Summit is the first major company to really test these waters by releasing Source Code, a nifty little thriller starring Jake Gyllenhaal, on VOD two weeks before the physical release. According to deadline.com, this will not shorten the window between the theatrical release and the home video release, but rather, will delay the home video release slightly in order to gauge the public's appetite for viewing a big-budget movie on VOD. One thing is clear -- within a few years, it will be as hard to find a DVD of a new release as it is a vinyl copy of the new Lady Gaga.

GET THE BOOT. This from our friends at Writers Boot Camp: SPECIAL ANNOUNCEMENT: 5-Week Basic Training Session with Writers Boot Camp Founder Jeffrey Gordon in Santa Monica starts Tuesday, June 7. A few spaces are still available. Stormfront blog readers can save $100 if they register by noon on Friday, June 3rd.

Writers Boot Camp alumni work at the highest level of the film and TV industry and have been nominated for Academy Awards, have won Emmys, Golden Globes, WGA Awards, Webbies – even the Tony! In Basic Training, you will learn comprehensive screenwriting techniques in a condensed 5-week time frame, and you will complete a first draft of a feature-length or TV spec script. Classes meet one night a week, and each writer can also check in for support during office hours. All you need is an idea and 10 hours a week to write. Kick off the summer by completing a draft! Contact us today at 310-998-1199 or e-mail rfisher@writersbootcamp.com. See you in class! AND contact us now about the Pavilion series, kicking off Sunday June 26th with a brunch and a full day devoted to attracting representation. Call us at 310/998-1199 for details.