Screenwriters, by necessity, spend a lot of time by ourselves; listening to the voices in our head, trying to give form to the characters that are going to populate and drive our story. Most screenwriters will agree that all genre bells and whistles aside, character is the only real essential that defines their stories. If we don’t get this aspect right, then no amount of special effects, last act reveals or hip postmodern embarrassments can save our script. Plot may be the visible structure of the rocketship that we’re building to transport people to our exotic new world, but it’s character that is the fuel; without it our creation will never achieve escape velocity.

So it’s strange to consider just how distant our relationship can be with the people who have to breathe life into our characters: a strange species known as actors. Most screenwriters don’t actually get to spend much face time with the people who are actually going to interpret their words. Even produced scribes are rarely invited by the director or producer onto the set. It’s kind of like you spent two years designing your dream house, and then you hand it over to the first anonymous laborer you find on Craiglist. There’s a bit of a disconnect going on.

I only truly became aware of this distance over the course of the last year when, with two friends and fellow alumni from the UCLA MFA in Screenwriting, we three newly minted virgin multi-hyphenates (co-producers/writer/directors) embarked on shooting our own self-funded feature project -- firstly because we got tired of people with bad hair gel asking us “Yeah, great, it’s a little too 'Hungarian,' but what else you got?”, and secondly because we believed we’d formulated a killer idea that could be done modestly, so why the hell not?

The last year has been tough but energizing (by coincidence, at time of writing this article, today marks the first anniversary of our start date. This should be taken as an indication to all indie wannabes that shooting a micro-feature on weekends take time and patience) and if there’s one thing that all three of us agree on it’s that working with actors has pretty much given us a whole new perspective on the writing process. Yes, working with actors. Those people that interpret all the pretty stuff we’ve been writing and (hopefully) rewriting. That mystical portal that acts as a direct continuum between your words and the audience that absorbs them... two or three years later on the screen.

Now, working on the lower slopes of the Hollywood system means that you quickly realize that some actors are better than others (and, to be fair, this is also true of writers.) Some come prepared, and some don’t. Some are actually even better than their showreels, whilst others make you wonder if the person stood in front of you is a poor CGI photocopy of the person you originally thought ideal for the part. Some “get” the role in relation to the larger story and trot their lines out quickly and efficiently; whilst others decide to try to invoke the “Jack Nicholson Method” of camera hogging (basically, this involves leading with an extended heavy pause before the delivery of the first line; then the actor moving their eyeballs to the left whilst keeping their head immobile, then tilting their head afterwards to follow their eye line, thereby ensuring an extra precious nanosecond of screen time.)

But actually sitting with an actor and discussing their part, and their interpretation of it and their thoughts, has been a real revelation to me as a writer, for several reasons:

1) It’s humbling. All flippancy aside, an actor is a human being, just like you. Hollywood is stuffed with stressed and bitter people who lick their wounds by ripping the piss out of any other type of professional than themselves, and actors are high on the shit list. We all have to drive on the bloody 405 to get to the shoot location. We all have dreams, and after a certain time we maybe all realize that we’re not going to be going to Cannes any time soon, but we remain invested in wanting to make some tangible, qualitative impact on this termite mound with our craft. We want to do something of worth.

Unlike writers, though, an actor doesn’t have the luxury of a thousand takes in the privacy of their Ikea-furnished palace: they perform in public, to a ticking clock. They have to deliver (“interpret” would be a fairer word) their contribution with often less than 24 hours of prep time, and often without contextual information about the scenes that the actor isn’t in. More often than not, actors are forced to thrash around confused, barely understanding their place in the greater scheme of things: like they’ve been given 20% of a map, with most of the landmarks left out by some malevolent cartographer.

They then have to stand in front of a camera, a stressed DP, and bunch of jaded smartasses with tired feet and one eye on the clock (or the craft services); even as other fussy people, that they don’t even know, are sticking their sweaty hands up their shirts and clipping radio microphones onto intimate body parts, or putting tape by their feet, or adjusting lights that can eradicate the cornea and fry the aqueous humor at five paces.

It’s a real gauntlet to run, but I can honestly say, after the last year, that I’ve never worked with a single actor who wasn’t trying their best (and in that I include even the few really delusional ones I’ve met). Actors have cojones.

2) It's all about the process. As a screenwriter, it makes me appreciate that any single empty white page can eventually contain any number of amazing things, after you’ve wrestled the beast onto the mat and got your scene; but it’s only gonna fly if you mediate it through human beings. A bad actor will always screw your script up; but a good one can deliver either a good or bad performance depending on how you work with them. A screenplay is so fragile as a concept that it’s a kind of literal orchid, mostly predestined to wilt despite the most fervent care. Perhaps that’s why people still use tired terms like “magic” when it comes to movies; because for these bloody things to work, you really do need a certain amount of alchemy and dark arts.

Actors help you realize, as a screenwriter, that the process only really, truly, starts after you got a good draft on paper (which should be the least required of you as the writer.) Whether you decide that you want to be a writer who never wants to actually venture onto a set, or be a multi-hyphenate who steers the blueprint through to actual production, you now know that your script is only the beginning of the process.

3) Writers inevitably become better writers by working with actors. As Harrison Ford famously told his director on Star Wars (1977), “George, you can type this shit, but you sure can’t say it.” Over the last year it’s been proven to me, time and time again that, despite the best advice from my professors at UCLA, who preached the mantra of brevity at me like Calvinist wordsmiths, that I still write too much. My two collaborators had the same realization; when we stopped rolling due to something not working, and had to go rework the lines, we actually got to the heart of what the scene is about. It’s a different tempo than the terraforming we initiated on Planet Final Draft. Sometimes our character just needs to get to the urgent truth of the sequence more quickly. Or perhaps we simply get that the characters is humiliated or evasive without the need for them to say one more bon mot.

4) Actors want the lines to work. On occasion, some actors have actually suggested cutting lines before even we writers do. It‘s a selfless act, but the best actors know that 10 seconds of potent screen time is better than 15 of blah blah. Actors will often work with you, and their suggestions may occasionally be worthy of consideration. 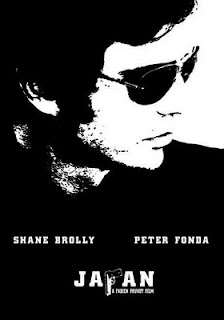 5) We’re all in this together. A few years back I was brought in to rework a thriller that was already shooting. Called Japan (2008, and not coming to a theater or a Target reduced bin near you any time soon), the script called for a potential pre-”Wrestler” Mickey Rourke to be the villain of the piece, and I accordingly labored on the pages with this ‘character vision’ in mind. Visions of Rourke’s career flashed before me as I tailored the part to his unique energy: The Pope of Greenwich Village, Angel Heart, Diner.  A couple of weeks later, I was invited by the director onto the set to meet the villain -- Peter Fonda. I was led to Fonda’s trailer and introduced to him. I wasn’t allowed to enter the trailer, just hover by the doorway. He looked up from his open bottle of Patrón  (no shot glasses evident) and giant... cigarette... and said, “Hey. I feel like you really got the essence of this bad dude. It feels like you wrote it for me. Your words are a privilege to read.” And then he pushed the trailer door slowly closed with his cane.

The point is: you need actors just like they need you. Yes, they can screw your lines up and mangle them, and drive you nuts with unbidden improvisations; but they can also deliver the truth that you heard in your head when you first wrote those lines, and in, in some cases, even make it better.

So don’t be a snob as a writer. Don’t treat your words like they’re being written onto flayed parchment in gold leaf, and that a bunch of barbarians are going to gutturally interpret them and screw your incredible vision up. If you haven’t been produced yet as a screenwriter, then forget using Appletalk to computer-read your stuff, or even acting it out yourself (chances are you’re as bad an actor as actors are as writers), and find at the very least some amateurs to do a table read. Hear. Your. Words. Out. Loud. Writing as a process may happen in a vacuum, but remember you are writing for cinema, not for a novel. And that means actors. Embrace the process and it may well embrace you back.

Originally hailing from the UK (in case you couldn't tell from the "bloody"s), Simon Herbert is a Los Angeles-based screenwriting teacher, tutor and magazine journalist and copy editor.