The Short That Took A Year 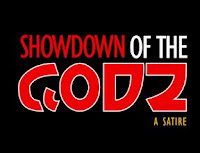 Hard to believe it, but it was one year ago that my cowriter Aaron Schnore and I put the finishing touches on our comedy short screenplay SHOWDOWN OF THE GODZ. Back then our budget was $8,000, largely put up by our director Julien Calderbank, and we planned to shoot in February in NYC and have the film out to festivals in the Spring. That would be Spring... 2007.

Er, well, we DID shoot in NYC in February. As for the rest of it...

WTF? How could Coverage Ink's first co production, a 16-minute short, take so long? Folks, there is no short answer, but suffice it to say, many lessons were learned along the way. The good news is the film looks great. We're all proud of it and I'm fairly confident it rocks.

There wasn't just one delay or issue, there were multitudes, both large and small. Most of them had to do with fixing mistakes. For example, due to some, shall we say, spectacular ineptitude on the part of our camera operator, certain scenes shot on certain days had dirt on the lens. We had two choices: leave it be or spend the money to have the film fixed. This process (called dustbusting) is the same painstaking process old films undergo when they are restored. Each frame is analyzed, and the debris, scratches, hairs caught in the gate, etc., are digitally painted out.

This took a lot of time and two separate CG artists (Tom Haney, and Lisa Yimm & David Bell of HDR-FX.) And then there were the compatibility issues--making the dustbusted footage integrate back into the original. This alone took weeks to resolve. But the end result is the film looks as pristine as, er, well, as it would have been had it been shot properly in the first place. Ahem.

Then there was the "Super X." This supposed rare monster toy is the Macguffin, the subject of our protagonist's quest. Yet on camera, the Japanese monster toy selected by our props guy looked the opposite of awe-inspiring. It sucked. Enter CG artist Tom Haney, who rotoscoped out the original weak-ass prop frame by frame and replaced it with a new one that just rocks, complete with dynamic lighting and proper sense of majesty.

Yeah, that took some time and a few bucks. Are you starting to get the picture?

Then there was music licensing... some more F/X work (including miniatures and more CGI) a key member of the team freaking out and bailing midway through, only to return months later; a few normal, healthy creative disagreements, and some flat-out attitude issues from a few key post personnel, all of which slowed down the works immeasurably.

And this is the tip of the iceberg. Suffice it to say, the Godz producer team--myself, Aaron Schnore and Robert Troch--often felt like we were battling a gigantic mutated Japanese monster with a broom, yet we forded on and stuck to our creative vision.

And today, we did it. Finally the film is mastered and ready for festivals.

In the coming months, www.showdownofthegodz.com will be up (not yet) and the film will be rolling out to selected Festivals in '08. We are also setting up screenings in LA and NYC for February/March and will eventually have DVDs available for sale, too. Thanks, everyone, for your patience. Will it have been worth all the time, money and effort? We'll see!