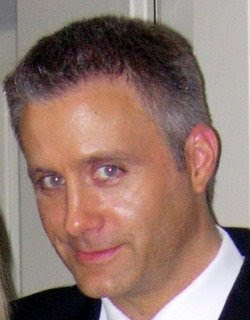 If you’re looking for an amazing blog written by a true industry pro, do check out high-level WMA executive Christopher Lockhart’s fantastic The Inside Pitch. Every single person reading this needs to spend ten minutes absorbing the wisdom imparted upon us by the wise Master Lockhart, who answers many questions from screenwriters and truly is the insider.

Here's an example of what you will find on Chris' blog:

(a reader writes:)Does the title really matter (when it comes to a spec)? I opted for (the provisory title) “4 and ½” to perfectly support the insanely smart hook in my logline (that can be seen at www.nu4m.com). If the logline is as important as you say (and I decided it is before I opened your twoadverbs.com site) I guess it worth the risk. And I’m saying that cuz I have better titles up my sleeves.

CL responds: Yes. I think a title really matters. Producers think about how they are going to sell the movie to audiences, and that process begins with the title. Yes, studios change titles all the time, but you want to consider the perfect title for your screenplay.

THE FAMILY STONE, which was released late in 2005, was originally titled THEY F**KING HATE HER and then retitled HATING HER before ending up with the final result. But the original title helped to increase an awareness of the script and prodded people to read it. Of course, the title SNAKES ON A PLANE gave that project a massive amount of attention.

I’m not a fan of your title, because it doesn’t give me a hint as to what the script might be about.

Is 4 and ½ a comedy about an ugly woman?
Or a tragedy about a man with a small penis?
Or a heartwarming MR. HOLLAND’S OPUS with math instead of music?

I have journeyed to your website to check out the “insanely smart hook” in your logline – which is more insane than smart.

The notion of a script that is a “fast-paced fantasy comedy with horror and parody elements set against a background of high adventure” doesn’t help me – in the slightest – to nail down the tone.

Furthermore, you chose a group of protagonists made up of screenwriters, which is an automatic “pass.”

Sadly, Chris folded the blog in April ’07, but it is still well worth your time. Check it out!
Posted by Admin at 1:48 PM