Update of the GODZ

Just got back from NYC, where we wrapped SHOWDOWN OF THE GODZ, Coverage Ink's very first film (a 20-minute comedy CI coproduced with director/producer Julien Calderbank and producer John Reefer, written by Jim Cirile & Aaron Schnore.) And what an amazing trip it was.

Even as I arrived in NYC the day before we were to begin our 1-week shoot, the problems began. First, our leading man David Caseman, whom we flew in from France to assay the role of Jesse, world's biggest Godzilla fan, arrived on set with a miserable cold, and even worse, his glasses had no nonreflective coating, meaning that movie lights were bouncing off them like solar flares. The glasses had to go--bummer, because A, David couldn't see, and B, they were actually integral to the character. Well, they WERE integral to the character! And so it goes in low-budget filmmaking--they're not integral anymore!

Fortunately, David was able to 'use' his misery which only helped his portrayal of Jesse--the put-upon loser whose world is disintegrating around him.

But more unsettling was that we still did not have our cast completely locked down even as we began shooting. Negotiations were still underway right up to the eleventh hour to get the awesome actor/musician Steve Burns ("Blue's Clues") for a role in the film. Though he loved the script, unfortunately we simply couldn't make it work with Steve's busy schedule (FYI, he is now the voice of Subway. Eat fresh, baby!) As Steve fell out, we began running behind. Very long shooting days made for a cranky crew. We were desperately low on money and several times I had to jump in and write checks to keep things together and pay for dinner and locations. Morale was plummetting.

And then something amazing happened. 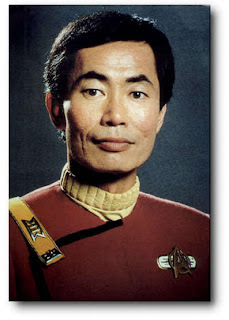 We had been in negotiations with George Takei for weeks for the pivotal role of Ono, the wisecracking sushi shop owner who challenges Jesse to the Godzilla trivia showdown that ultimately changes their lives. You know how they say you should never write a role for a specific actor? Well, screw that. I wrote Ono for George Takei, and for me there was no other actor who could play that role. Sure, we had another fellow--an excellent actor to be sure--cast in the event we could not make it work with Mr. Takei. But getting Mr. Takei for this role became my goddamn mission.

And it was not easy. Takei is a busy man (now on NBC's "Heroes.") Plus the logistics of bringing Mr. Takei to NYC to the shoot were formidable and not inexpensive. And so even as Steve Burns' manager gave me the bad news, I found out that Mr. Takei, too, had a commitment on the day we needed him. But Takei loved the role and was very interested, so his people wanted to know--could we simply push the entire shoot back a day to accommodate him?

Gasp. Huddle time. I met with producer John Reefer to discuss exactly how much it would cost us to do just that--and if in fact it would even be feasible. Extending the shoot by one more day meant incurring sizable additional crew, equipment rental and insurance fees. Did I mention we were low on money?

Reefer came back with a figure of $3,500. Gulp. As of Monday, day three out of six, things looked bleak. We were not going to be able to accommodate Mr. Takei.

But then I remembered something--hey, this is a ^$#@!*&^! low-budget movie. We're supposed to be getting people to do this for love! I instructed Reefer to beg, plead, cajole and offer sloppy oral sex to everyone necessary. If we could get the cost of the extra day down to $1,000... we were a go.

Next morning, Reefer called me bubbling with excitement. He had gotten the extra day down to $800. Takei was on! I shelled out the dough out of my own pocket, closed the deal with Takei's people, and that night on set I had the pleasure of announcing to the cast and crew that George effin' Takei had accepted the role of Ono! Talk about a morale boost! A cheer went up like you would not believe, and from that point on, our overworked and underpaid crew gave 117%.

Thursday morning, Mr. Takei flew to New York City to be in our movie. Unfortunately, I had to leave the day he arrived... (grumble.) But by all accounts he was amazing--gracious, funny, charming, signing autographed Captain Sulu 8x10s for everyone and wowing our director, who humbly called directing Takei "the most amazing experience of my life." Simply put, Takei killed in the role; and we wrapped the movie a day late and a few dollars short.

But damn, the footage looks amazing.

Now we have to put it all together. I hear this will take more money. Uh oh...

Mr. Sulu! How did you get Mr. Sulu to be in a short? That is so awesome! I can't wait to see this film. Congratulations, Jim!

is this a spoof or a parody or something. i'm wondering how you can use godzilla in a movie. i always thought you have to stay away from copyrighted characters.

Anon, yes, it's a loving parody. We did in fact run this concept through an attorney before proceeding. And the film will be very flattering to Toho Studios, and in fact it is dedicated to them. So while sure, they could always come after us, the consensus was we were in good shape and that the owners of the property will take the film in the spirit it was intended.

What does one do with a short film anyway? You can't sell it to anyone can you? I know a guy who spent 25 thoundand dollars to make a short film and he got it into a few festivels but at the end of the day he had nothing but a piece of film that nobody was really interested in does hollywood really give a crap about a short film anyway

Hey CP, this is Aaron, Jim's writing partner on GODZ. Good question re: shorts. While you're right that shorts rarely make money (sometimes they win festival money prizes, or get purchased for a compliation DVD or something), I've found, as a screenwriter, that my short films have helped my career significantly. 3 of my 4 short films have feature script versions that I'm actively shopping -- so the short film works as a trailer of-sorts. Lots of indie feature films started as short films that were discovered at festivals -- SAW, HALF NELSON, SLING BLADE, RAISING VICTOR VARGAS, and NAPOLEON DYNAMITE all started as short films. Also, having some IMDB credits and a few screener DVDs of awesome short films to send with my writing samples has helped me bag several work-for-hire screenwriting gigs. Finally, I've made a bunch of contacts at festivals where some of my earlier short films screened -- lots of parties. My advice: every serious screenwriter should make at least one short film.

Let me also add that having a celebrity definitely elevates the film. Landing Mr. Takei means the film will be taken seriously and watched by everybody and get a lot of press from fan sites. So maybe CP's friend blew his dough, and a lot of people do, but we all have a lot of experience in the biz and thus we set out to make something that will garner some real attention.

Sounds great guys! I am a big Godzilla fan and a star trek fan too so this project sounds WAY cool. Now don't screw it up!

I CAN'T WAIT TO SEE THIS. GEORGE TAKEI IS THE BOMB. I LOVE THAT HE CAME OUT SO BOISTEROUSLY LAST YEAR! I ALWAYS WONDERED WHY THEY NEVER MADE A CAPTAIN SULU TV SERIES. IT WOULD HAVE BEEN RAD. IN FACT THEY SHOULD DO IT NOW, SINCE THERE'S NO STAR TREK SERIES ON THE AIR. IT WOULD BE GREAT TO FINALLY GO BACK TO THE ORIGINAL ERA. TAKEI LOOKS GREAT AND WOULD BE AN EXCELLENT STARSHIP CAPTAIN AND LEAD ACTOR. BUT IN THE MEANTIME I'LL BE HAPPY TO WATCH HIM ON 'HEROES' AND SEE HIM IN THIS SHORT FILM TOO!

This is Robert Troch Executive producer of Showdown of the Godz. Start watching for this film. It has been (and will be) submitted to myu festivals around the country. Takei is GREAT in it too!