Once again, it was another whirlwind weekend of fun and excitement. 4,000 writers descended upon the LAX Marriott & Renaissance Hotels for four days of networking, lectures, pitching, and of course, trying their luck at the CS Open.

As many of you know (since a lot of you participated!) the CS Open is the world's only live writing tournament. Every year, hundreds of writers put their writing-under-the-gun skills to the test, all vying for a chance to win that big $5,000 prize. 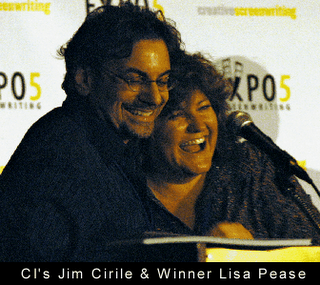 700 people were given 90 minutes to write an original scene, by hand, based on scene parameters I read to them. Those scenes were then evaluated by the Coverage, Ink team, with the top 10% (this year, everyone who scored a 90 or above)--moving to round 2. We also had a lot of folks trying to better their odds by enrolling in several round 1 sections--and in fact, one of our finalists watched his scores rise round by round. After writing five original scenes (and probably crippling his writing hand,) he scored that 90 and made it into round 2.

The Round 2 folks then gathered Saturday night, where they had to write yet another brand-new scene, which were then evaluated on the spot by CI. The top eleven were then notified to return to the room Sunday morning to write one last scene. CI then picked the top 3 scenes and, after running to Kinkos for copies, handed them off to staged reading expert Eddy Herch & his team of actors, who then had two hours to rehearse. 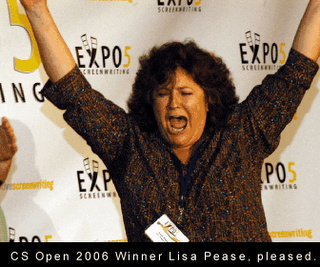 Then the real fun began--the performances. Each of the three scenes written that very morning were performed live on stage by actors at the Expo closing ceremonies. And this is where we learned just how the CS Open is really a microcosm for the filmmaking process, because in less than a day, the scene was written, edited, staged, performed, and then evaluated by an audience! And so the handwritten words on the page really came to life in the case of some of the scenes. We also witnessed firsthand how the performances of the material, moreso than the material itself, affected the way the audience voted. For example, the scene that won, Lisa Pease's excellent "Roswell That Ends Well," also had the best staging and physical comedy. The actors clumped together and entangled arms to imitate an multi-appendaged alien bartender, which had the audience rolling. But the actors' timing was also off in a few places, and that timing may have affected how well the other two scenes--Todd van Der Werff's "Where There's a Will" and Fran Ervin's "Princesses--The E! True Hollywood Story"--played. 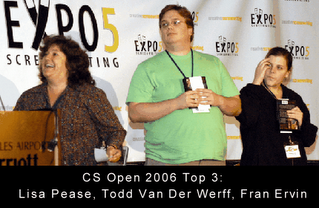 But in the end, it was Pease who triumphed, giving a rousing, motivating speech to the crowd of 1,000 fellow writers. Like Cressandra Thibideaux, last year's winner, Pease, too, had been coming back year after year, section after section, to the CS Open. Every year she'd do a little better. Well, this year, she did 5 GRAND better. Way to go, Lisa!

After an exhausting 3-day weekend, CI folded its proverbial tent and went home to crash HARD. Did I mention just how much #$&^*!@%*#! walking we had to do, back and forth from one hotel to the other? Actually, it was just as bad at the Convention Center, but at least this year there was a BK right across the street ;) But you can bet we'll be back next year for YEAR 6, and who knows--maybe next year YOU'LL win the big bucks!

For those interested in the scene prompts, you can find them posted on www.screenwritingexpo.com. Here's the round three prompt for this year. The 11 finalists had to write their own interpretation of this:

Your PROTAGONIST is a washed-up shell of what he used to be. Formerly a star in his field, he’s now reduced to working a soul-sucking menial job. But then TWO UNUSUAL COWORKERS confess a startling secret and bring him to a special place. PROTAGONIST is presented with an opportunity to regain what he once had. The only problem is, he will have to part with the one thing he most truly cares about to make it happen. Write the scene in which your protagonist wrestles with his dilemma. You may use any other characters or settings of your choosing. 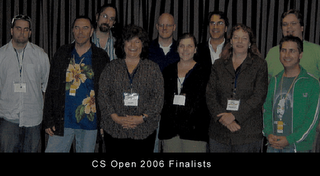 As always, it was a fabulous, exhilarating time. Congratulations to our winners Lisa Pease, Fran Ervin and Todd van Der Werff!
Posted by Admin at 6:28 PM

Thank you, Jim, and your fellow writers/judges at Coverage Ink. I was so incredibly thrilled to win. I was so happy just to make it to the second round, and you probably remember my excitement on the phone when you told me I was in the top 10.

When I saw I had made the top three - that was just - well, indescribable. Remember you saw me walking out, and said I was "beaming"? I was, for the next several hours. But after the win, I was beaming all the next week, until I promptly collapsed from illness and exhaustion for the several days..! (Winner's pneumonia? Is there such a thing??) At any rate, now that I'm back among the living - I just wanted to thank ALL of you for giving me high enough scores and fantastic, creativity stimulating prompts to allow me to move up and ultimately, to let the audience judge for themselves. I had a BLAST. I know everyone else did too.

I strongly encourage ANY would-be writer to enter the Open. It's the most fun you can have alone for an hour and a half. ;D Seriously!

Winner's pneumonia? That's a new one. Whatever you do, don't get a movie produced, it might kill ya!

Looks like fun although I never tried it i would like to. I was wondering if coverageink might do an online version of the cs open. not sure how it would work though.