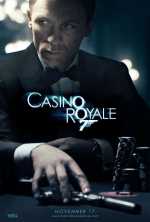 I have to admit, I'm one of the ones who had trouble with the blond hair. I'm a bit of a purist when it comes to these things. I like my iconic movie heroes to look "on model." While I thought "Batman Begins" was an excellent film, I hated the suit design. It almost ruined the whole movie for me, because it's too far off-model. Same thing with the atrocious Superman suit redesign from "Superman Returns." And now we have a new Bond, and he's... blond.

But now having seen "Casino Royale", I have to say that the hair is about the only thing they didn't get right.

Reviewers are calling CR the best Bond film since "Goldfinger," and much praise is being deservedly heaped upon Daniel Craig for his believable and gritty Bond. But I think the real praise is deserved by the screenwriters Neal Purvis & Robert Wade along with Paul Haggis.

I am what you call a literary Bond fan. I've read all the Fleming novels several times, and I believe that while a few of the films have been quite good, on the whole they pale next to the Fleming books. Fleming wrote the most delicious prose imaginable--rich and detailed and incredibly thoughtful. When you read a Fleming Bond novel, you're right there alongside him, and you understand the minutiae of the world of the story thanks to Fleming's meticulous research and painterly prose. The movies, on the other hand, turned Bond into a caricature after "Goldfinger" (1964) and left behind much of what made Bond work on the page. Fleming's Bond was a fallible, brooding, charming but often cruel man who was often his own worst enemy. While there was some minor gadgetry in the books, the character mostly depended upon his wits and sheer physicality to get him through.

And he was particularly vulnerable when he fully opened up his heart, as he did on two notable occasions in the books--"On Her Majesty's Secret Service," and "Casino Royale." Neither ended well. In fact, the film version of "OHMSS," long viewed as the forgotten Bond film (since it starred one-off Bond George Lazenby) was the most faithful of all the films to the book, even including Bond's marriage (and the heart-rending ending where Bond, having found happiness for the first time, watches his wife get assassinated before his eyes.)

Thus I entered the theater with trepidation. For years, every time a Bond film would come out, we'd hear someone say in an interview "they're trying to go back to the books" or "rediscover Fleming" or "bring a new edge to the character" and so forth. We heard this from Timothy Dalton and Pierce Brosnan, and they were full of crap, and every single one of their films stank and continued the slow and painful destruction of a film icon. By the time Brosnan's run was done, I had sworn off Bond films. I simply could not stand to watch the character be put into another series of idiotic chases, explosions and stunts while having no emotional core to drive the plots. Fleming knew that the plots had to be fantastical but also believable, something the filmmakers long forgot.

Well, folks, I am very very pleased right about now. They finally GOT IT RIGHT.

"Casino Royale" is, to my mind, a textbook example of how to handle a tricky adaptation. The original book was not very cinematic. It was simply a long chemin de fer (a French card game--not poker, as in the movie) game, with a few attempts on Bond's life; but at its core was Bond's romance with Vesper Lynd. Here Bond for the first, but not the last time, dropped his guard and lived to regret it. A few years back I consulted on a fairly literal adaption of the book which a fellow had written on spec. While that version was lovingly faithful to the novel, it also made clear just how poorly a literal adaptation would work on screen. Concessions needed to be made to accepted movie structure, but also to the expectations audiences have developed of the cinematic Bond character.

This version of "Casino Royale" handles the adaptation masterfully. While much of the story is invented out of whole cloth, several key setpieces and plot events are true to the 1952 novel that launched the whole Bond franchise. Astonishingly, the torture scene--which I had thought to be very problematic to put on film--along with much of the third act of the book, was retained with incredible fidelity to the source material. Bond is put through the wringer here, folks. This is what makes him who he is. And we finally get to see it -- the way Fleming intended.

Most importantly, the character of Bond is faithful to the book, and in fact to the way Fleming further fleshed out the character in later novels. As I watched Craig breathe life into this new, reborn cinematic Bond, I almost cried out with excitement, because here, for the very first time--even moreso than Connery's version--this cinematic Bond finally is now the same man as the literary Bond. Best of all, this Bond actually arcs, like all good cinematic heroes do. We see WHY he became Bond. All the pieces of the puzzle finally fall into place for the cinematic Bond. And that, friends, is a glorious thing.

Blond hair? Hey, you know what? Having seen the movie, I am jumping off the haters' bandwagon. Just call me Blond... James Blond.

Plus Daniel Craig is fine, mm-hmm.

I have always loved Roger Moore. To me he was the epitome of cool. He was debonair and deadly. Ok Moonraker was stupid, but Moore's charm had a lot to do with keeping te bond franchise alive in the 70s and 80s. i don't think this new guy has anything approaching moore's charm.

I loved it. Best Bond film in many years!

Totally in agreement with you. Loved the new Bond, the most refreshing entry since the early Connery Bonds. Just a pleasure to watch from end to end. A few minor quibbles - I thought Vesper was bland - of all the women they could get, I thought they could have done better. She was servicable at best. The title song was also bland. Other than that, Craig was mesmerizing and I just loved him. What a pleasure - I'm almost in favor of remaking a couple of crummy titles that were wasted such as Diamonds and The Man with the Golden Gun.

Right on, Steve. FYI, Steve Rubin is the author of the excellent The Complete James Bond Movie Encyclopedia.