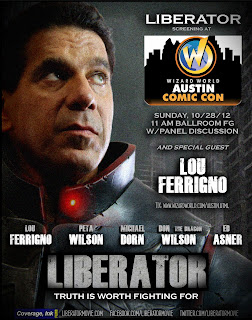 THE LIBERATION IS UNDERWAY. Coverage Ink's new short film LIBERATOR is Hulk-raging to a festival or comic-con near you (this weekend: Wizard World Comic-Con Austin.) LIBERATOR stars Lou Ferrigno (The Incredible Hulk) as a washed-up ex-superhero trying to get his life back on the rails, and features an all-star geek cast: Peta Wilson (La Femme Nikita), Michael Dorn (better known as Worf, son of Mogh), Don "The Dragon" Wilson (Bloodfist) and the legendary Ed Asner (Up) as President Whitlock. Directed and co-written by Aaron Pope and exec produced and co-written by Jim Cirile, the film recently screened at Stan Lee's Comikaze Expo to enthusiastic crowds. It blew us away when producer Tom DeSanto implored the audience to take to the social media and do everything they could to help promote LIBERATOR. Almost as cool as Stan Lee interviewing Lou about LIBERATOR on Cocktails With Stan. Please like Liberator on Facebook to find out when and where the next screening will be.

WRITERS ON THE STORM EARLY DEADLINE COMING FAST 10/29.  Whoa, is it really the WOTS early deadline? Heck yeah, and this is your last chance to get in cheap. As of 10/30 the early entry period ends and the price goes up. Writers on the Storm is our own big-money, big opportunity contest ($25K cash and prizes, including a $10K first prize for features and $2.5K first prize for TV pilots.) Plus we've got some really killer, unique prizes this year -- fancy a meeting with the producer of the upcoming sci-fi tent pole Ender's Game (starring Harrison Ford)? Or with staff writers from Sons of Anarchy and Burn Notice, or with the Co-Executive Producer from How I Met Your Mother? We got all that and way more. And entry into Writers on the Storm is FREE with any screenplay submission to coverageink.com during the contest. Jump on this now! http://writerstorm.com.

TRACKING B - LAST CHANCE TO ENTER. One of the few contests out there worth the money is the Tracking B feature film screenplay contest. This revolutionary contest offers no prize money or prizes. Seriously. They merely offer insane levels of access. See, Tracking B is an industry tracking board with a pretty bad-ass selection of industry heavyweights as judges. More often than not they get people signed and launch careers. The final deadline is Sunday 10/28, so get in before it's too late. And every writer who submits two scripts scores a complimentary 1-year subscription to Tracking B.com ($89 value.) Enter now at www.trackingb.com. 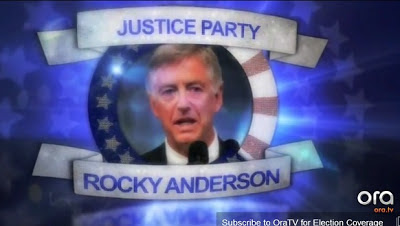 DID YOU WATCH THE DEBATE? No, not the one where the two military industrial complex-owned candidates bragged about how much they plan to drill, kill and further increase the bloated "defense" budget. No, I'm talking about the third party candidate debate, hosted by Larry King. These four excellent candidates -- Green Party's Jill Stein, Justice Party's Rocky Anderson, Constitution Party's Virgil Goode and Libertarian Gary Johnson, may not have a chance of winning in 2012, but here's hoping that changes sometime soon or we are in deep doo-doo. Over 90 million people say the country is heading in the wrong direction and identify themselves as independents. Check out what the third partiers have to say -- you won't regret it. 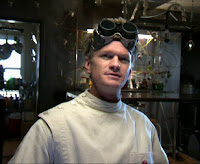 HORRIBLE SING-ALONG. Looking for a fun vaguely-related Halloween event in Hollywood 10/27? Why not check out the big-screen bouncing-ball sing-along version of Joss Whedon's 2008 camp musical epic Dr. Horrible's Sing-Along Blog? Includes episodes of Dr. Horrible star Felicia Day's The Guild and Husbands. It's all a benefit for Best Friends Animal Society (bring canned food for the food drive as well.) There are a whole passel of announced guests, and it's a pretty safe bet that Joss Whedon and some of the cast (Neil Patrick Harris, Nathan Fillion and Felicia Day) will be there as well. More info and tix on whedonopolis.com.

MIDWAY THROUGH THE FALL SPEC SEASON... Every year, a glut of new material hits the market in September/October, one of the times when the industry is traditionally fully engaged and not in summer vacation/Sundance/Toronto/holiday mode. In other words, there's a 2-month window that occurs twice a year when specs flood the market--right after Sundance, and right after Labor Day. Last year's numbers were pretty fantastic, with 20 specs selling (out of 53 that went out) in October 2011. This year the numbers aren't quite as strong, with only two specs selling so far this month -- but the market remains hungry, the doom n' gloom from a few years ago (when no one was buying jack squat) at least temporarily abated. In short, all is well, but as usual the bull's-eye continues to shrink. High concept remains king, and industry staples action/thriller, comedy, and horror rule the day. Best part: Paramount seems to be trying to tell people they really are still in business. They're releasing 8 movies by year's end and have gobbled up 11 specs so far this year. Not a bad time to be a writer!

TOTAL MOGUL HOLLYWOOD POWER WEEKEND POSTPONED. We were really psyched for this one, but we've had to bump it to spring 2013. Producer and event coordinator Steve Longi recently left Permut Presentations where he's worked on many of their hits over the past 15 years (like Face/Off) to launch his own shingle Longitude Entertainment. He's been acquiring material and making deals and, well, being a busy little mogul. Which means unfortunately we have not had the time to build this into the world-class event it needs to be -- so we're pulling it for now. We've notified the attendees and will announce a new date in the next few months. In the meantime if you're interested in finding out about this all-new, premium event, where you get to hang poolside and schmooze and booze with agents, managers and producers, please visit the site at mogulweekend.com and drop us a line if you're interested in participating.

COUNTING YOUR NICHOLLS. On Weds 10/24 the Academy for Motion Picture Arts and Sciences announced the five winners of the the Don and Gee Nicholl Fellowship for 2012. These fellows become Nicholl Fellows and get s $35K prize, with the proviso they are to complete a screenplay in the next year with tutelage from their heavy-duty mentors. Congrats to New Yorkers Nikole Beckwith and James DiLapo, Louisiana's Allen Durand, Sean Robert Daniels from South Africa and Michael Werwie from Los Angeles. The Nicholl Fellowship is the most prestigious of all screenwriting contests, and winners often go on to prestigious careers in the industry. In 2012 they received a record 7,197 submissions, so if you didn't win, don't feel too bad. In the meantime, set your sites on honing your craft and try your hand at this short list of contests worth the money: Scriptapalooza, Tracking B, Script Pipeline and Writers on the Storm.

HANKS HOUSE GRAND SLAM. Okay, no question slam poetry is a pretty easy gimme and a go-to for comedy routines, but this one from Cloud Atlas star Tom Hanks, about the uber-cheesy '80s sitcom Full House, takes the proverbial cake. By way of retribution, I fully expect John Stamos to bust a gangsta rap about Bosom Buddies on Letterman within the week. You heard it here first!

Continue on to Should I Get an Agent, Manager or Attorney? below