SAVING MORE CATS THAN THE SPCA

The first place I ever heard of Blake Snyder was in the UCLA Professional Program. Teacher Kris Young was explaining the “pet the dog” concept, and noted with some amusement that this was interchangeable with “save the cat,” and indeed there was a new book out about that very subject. And I thought, what the hell is he talking about? Turns out ‘pet the dog’ and ‘save the cat’ both refer to a scene early on in a screenplay where the protagonist does something unexpectedly selfless. It’s a technique used in many movies to make the audience like the hero -- especially if said hero is a criminal or exhibiting some unlikable behavior they are going to need to arc out of later on.

The next thing I thought was, Oh, joy, another book on screenwriting. Yawn. Some time later I saw the book at my local bookopolis and browsed it… for, like, an hour. There’s something about its elegant simplicity that just grabs you. I don’t know how to better describe it. I mean, I’ve read an awful lot of books on screenwriting and am as jaded as they come. But “Save the Cat!” is a grabber. Blake Snyder knows his stuff and conveys it in an incredibly effective, punchy way that just makes you go, of course! NOW I get it!

Snyder has sold big specs (“Stop! Or My Mom Will Shoot”) and had big studio movies produced. He knows what the town wants. But his passion, amazingly enough, is imparting his secrets unto the likes of us. How cool is that? He now has two “Save the Cat!” books out with a third on the way, and his Save the Cat! software is an indispensable tool that forces you to structure your script properly. Oh, and he does seminars, too. Visit him online at blakesnyder.com.

Jim Cirile: Great to talk to you, Blake. Can you tell everyone a little about your background? 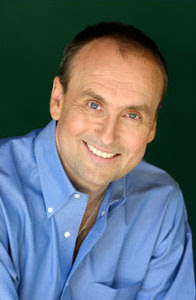 Blake Snyder: I’m third generation film business. My uncle was a publicist for RKO, and my dad was a TV producer for children’s television. He did shows like “Roger Ramjet” and “Big Blue Marble.”

BS: Oh, cool. Yeah, it was a beautiful show. So I grew up in the business, and when I graduated from college, I wanted to become a screenwriter. I came to Los Angeles and did all the jobs we do -- you know, assistant on sitcoms, I was a page at NBC and such.

JC: Kenneth the page! Where were you living before LA?

BS: I graduated from Georgetown with an English degree.

JC: Were you doing creative writing, short stories in school?

BS: Absolutely. I was editor of the high school newspaper and worked on the college paper and such. I was always interested in writing. I just happen to hit it at a time here in Los Angeles when the spec screenplay was king.

BS: Yes. I had good success. I worked with a cowriter named Colby Carr. We sold a script called “Blank Check,” then went on to sell a lot of screenplays and still do that actively. Recently,. I wrote one a couple of years ago called “Granny,” which is a slasher movie (laughs.) She kills teenagers who violate the rules of etiquette.

JC: As well she should!

BS: (laughs) And then another script called “Bones,” which is a nice family film. It’s about a boy and his ghost dog named Bones.

BS: But my real passion is helping other writers. I like to think of myself as a good screenwriter, but I think what I’m really good at is teaching. I really have a passion for it, and that’s what I discovered writing “Save the Cat!” I wrote it in 2003. It was published in 2005, and it was just an immediate kind of viral thing. It just took off.

JC: Okay, so let’s talk a little bit about the genesis of “Save the Cat!” Even in 2003, there were plenty of screenwriting books out there. What made you think you could stand out from the pack?

BS: I think it’s because of my experience in entertainment and in film. What really struck me about all the books that were out there was that they were excellent -- you could learn from all of those books. I love them all. But what was lacking to me was kind of an inside baseball approach. What are they really looking for, and what is this really about? I’ve been to many courses for screenwriting where they say, “Follow your muse.” Well… maybe. (laughs) A screenplay is a blueprint for further action. It is not in and of itself a final product. You’re going to have to attract somebody to partner up with you in some sense to go make that *proposal* a reality. So that’s what my angle was.

“Save the cat” and all the terms I use are just kind of slangy shorthand me and my friends use to get to the point of, what’s wrong with the script? What’s wrong with the idea? What’s wrong with the structure? It’s practical to me -- like, here’s something you can do *today.* The courses I took and the books I read, they were interesting, but they didn’t really give me a course of action. I think one of the best things about the book is the Blake Snyder beat sheet. It’s like fifteen beats -- just fill in those blanks.

JC: It’s a template for how movies are actually structured and what you will typically find in most movies. You can spend months plowing through “Story” and at the end of it have no idea what to do. What are the studios actually looking for? This is it, laid out in very concise, easy-to-understand format -- do this, this and this. I’ve never seen it all coalesce like that before.

BS: Thank you very much. That’s a real compliment. That’s what I was trying to do. I think story is story. We can go back to the (ancient) Greeks and find these same principles. But for me, a busy guy trying to figure out how to write a screenplay, I want to know, what do I do now? I tried to make it easy to read and fun and keep it light. I’m very appreciative of all the experiences I’ve had and was very ready to give back to others but also to have fun. I think many screenwriting courses are, “this is for only a privileged few of you who understand these principles.” No, let’s just jump in and play. You may sell your screenplay, you may not, but you’ll certainly understand how these principles work and have more fun doing it this way, I think.

JC: Give us a heads-up on what attending one of your seminars is like.

BS: It’s the most fun I have all week. It’s two days, Saturday and Sunday. The first class we call the Beats Weekend. A maximum of 12 writers come in to the room. They each have two or three movie ideas. We talk about pitching and loglines on Saturday morning, and we just jump in and beat out the story. By the end of the weekend, each writer stands in front of the group and pitches a 15-beat outline of their story. It’s just remarkable what happens in there. 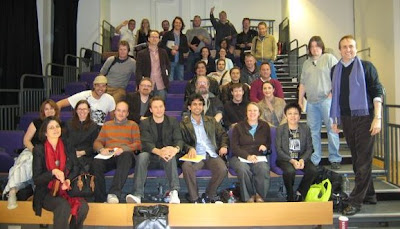 As an objective listener to a pitch, I have no emotional involvement. I can hear the flaws. I’m not going to get you on them in a critical way, but I’ll say, here’s something I think you’re missing, or here’s a title suggestion or here’s a theme suggestion. That kind of peer-to-peer review is what we use in our workshops, and it’s just amazing. That’s the Beats Weekend. Then the next one, what we call the Board, is for six writers only. We take the 15 beats and we work out the 40 scenes that they’ll need to actually write the script. The sales that have come out of that workshop, I’ll talk about some of those in book three. And then for free after the class, we have Save the Cat! writers groups all over the world. If I go into a town -- Vancouver, Barcelona, London, give a workshop, and then someone volunteers to lead that writing group. Those writers then continue to meet and work on their stories using these tools. It’s empowering stuff.

JC: Talk a bit about the software.

BS: In the book, I talk about “the Board,” the four roads of Act 1, Act 2 and Act 3, Act 2 being twice as long as the other two acts and the layout of how all that works. It’s the bulletin board method, but it’s never been codified or explained in a software program like this.

JC: And it reminds you every step of the way through the process of where this material should be according to your methods, and it’s all very logical. It doesn’t let you just slap some random material anywhere into the script. It’s sort of like an intelligent, interactive bulletin board. I think it’s important to note that it holds your hand through the whole process.

JC: I recommend “Save the Cat!” to our clients all the time. 99% of them are ecstatic and become STC! advocates themselves. But occasionally I hear, “This is not the kind of movie I want to write,” or “this is too limiting to me,” or “I’m much more of an indie guy than this.” My response is always that this paradigm is equally applicable to studio and most indie movies. If you want to do something experimental, then yeah, maybe it’s not for you. I think it’s a lot more universal than some people might give it credit for, if you really understand the way movies are made.

BS: Thank you for that, and it’s because you’re a professional who knows that this is the way the world works. This is one reason I wrote book two, “Save the Cat! Goes to the Movies.” In there I’ve included many indies that use the very same beats that I’m talking about here. The Save the Cat! method can kind be like cold water splashed on people who are kind of living in a dream world. (laughs) I think the pushback from people is because they’ve been awakened, and they don’t like it. They’d rather hit the snooze button and keep on dreaming. I’m not saying necessarily that they’re misleading themselves, and I’m not trying to squash their creativity. I’m just trying to get them to have success with it. The method is not a straitjacket or formula -- I hate the word “formula.” It’s freeing, completely freeing. (In any story,) you have to maintain certain principles, and you are better armed if you know them. All the great modernist painters, for instance -- they all studied the classics before they went off and did their own thing. That way their experimental work was much more insightful. I think for any career, you have to know what came before you and study how structure works in order to make yours work, too. Charlie Kaufman -- “Eternal Sunshine” is one of his most successful movies. It’s because he follows the beats.

Great interview Jim! I'll check out Blake's software and of course the other books in the series.