Wow! This is super cool. One of the best PC games ever made to be brought to life by a super talented director? Sign us up. If you haven't played BioShock yet, (see our article on best games for writers below) you're missing our on a truly cool, creepy and immersive world. It's escapism at its finest. Here's the press release from publisher Take Two Interactive:

2K Games announced today that it has reached an agreement for "BioShock," the universally acclaimed smash-hit video game, to be developed as a feature film by Universal Pictures. 2K Games, whose 2K Boston and 2K Australia studios developed "BioShock," is a video game publishing label of Take-Two Interactive Software, Inc. 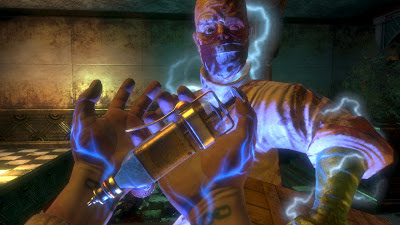 The prospect of bringing this blockbuster game to life has attracted not only a major studio, but top Hollywood talent. Gore Verbinski, director of the "Pirates of the Caribbean" trilogy, is slated to direct and produce the BioShock movie. John Logan, Academy Award-nominated writer of "Gladiator," "The Aviator" and "Sweeney Todd," is in talks to do the screenplay.

The expected release date and terms of the agreement were not disclosed.

An original property developed by 2K Games, "BioShock" is one of the most successful new interactive entertainment franchises to launch in recent years. A critical and consumer hit, BioShock has sold more than 2 million units worldwide since its release in August 2007. A sequel to the game, "BioShock 2," is planned for a release in 2009.

"We are excited that 2K Games' vision for 'BioShock' will be carried forward in a new medium," said Strauss Zelnick, Chairman of Take-Two. "'BioShock' has been hailed as one of the most highly cinematic and richly plotted titles in interactive entertainment, making it extremely well-suited to film. In partnering with Universal and Gore Verbinski, we have assembled a team that respects the uniqueness of 'BioShock' and will translate it into a powerful movie experience.”

Zelnick added, "Our ability to attract a major studio and unparalleled creative team speaks volumes about the strength of our 'BioShock' franchise. It also demonstrates how Take-Two is delivering value based on our strategy of creating and owning our industry’s most powerful intellectual property."

Christoph Hartmann, President of 2K Games, noted, "'BioShock' fans appreciate the depth and complexity of the game, and our partnership with Gore Verbinski will introduce the world of Rapture to an even wider audience. In addition to his impressive body of work, Gore is an avid video gamer and true fan of 'BioShock.' That was extremely important to us in deciding to move forward with this project."

Considered to be one the finest games in the history of interactive entertainment, "BioShock" unfolds as a deep and exciting adventure. Barely surviving a plane crash, the player lands in icy uncharted waters and discovers an undersea city called Rapture, a failed utopia whose citizens had embraced genetic engineering before the city descended into pure anarchy. Power and greed have run amok and the city has succumbed to civil war. It is a gripping game that forces the player to make complex moral choices. Fans have embraced "BioShock's" mysterious world filled with powerful technology and fascinating characters. "BioShock" is also renowned for its rich visual detail depicting a gorgeous Art Deco world set deep beneath the sea.
Posted by Admin at 8:13 PM