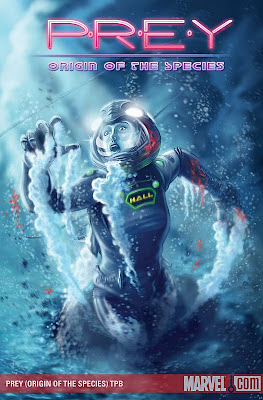 Many of you know Michael Lent from his dearly departed "Belly of the Beast" column in Creative Screenwriting. Since leaving CS, Lent has been a busy lad -- writing and producing all sorts of cool book and movie projects. His graphic novel PREY - Origin of the Species -- is now available at fine comic book shops nationwide. We're also proud to say that Coverage, Ink helped develop this project! We caught up with Lent to talk about PREY and a bunch of other stuff.

Coverage, Ink: Can you give us a heads up on why you left CS and what you've been up to since?

Michael Lent: Two years ago, I went from columnist to Contributing Editor at CS so that I could focus exclusively on writing and producing. End result was that I joined the 33 Club. That is, producing three movies and writing three books in 24 months. I produced or co-produced Hard Scrambled, Witches' Night and Naked in America. The last two are in post-production right now. In addition to Prey for Marvel, I wrote two other books -- Christmas in Hell (Amazon Books) and a sequel, Christmas Letters from Hell to be published by Simon & Schuster in August '07. Currently, Brian McCarthy (Wide Awake) and I are collaborating on a cross-genre horror/Western film called Blackwater that we'd like to shoot in October.

Writing the Belly of the Beast column was an amazing experience, but after 8 years and something like 60 articles, I felt like I needed go back into the field full-time and have fresh experiences without the pressure to write about them in a journalistic sense. Likewise, I've been approached by a publisher to write a "take this and use it right now" Breakfast With Sharks-styled guide (Lent's excellent book on surviving the screenwriting life, available HERE) specifically for writer/producers, but I've declined for the above reasons. Maybe in another year or so.

CI: Prey: Origin of the Species was originally a big action spec script. Tell us what happened with it as a script, and how did it become a graphic novel?

ML: This is a good story if you're like me and love deconstructing the business side of writing. In July, 2004, I wrote Prey as a spec and turned it in to my agent. I waited the mandatory background check 10 days and then called him. Immediately, my agent starts waxing poetic about how great the script is -- "fantastic action, strong protag, cool storyline and excellent dialogue" and so on. Then there's a pause that I've learned from experience means "But ..." So I say, "But ..." and he says, "But ... What you've written is a big, expensive summer event film that's gonna cost about $110 million to make. These days, all the big event films are coming out of comic books and graphic novels. It's a shame you didn't have one of those behind this script because right now, there are only a couple of places I can take this to [since most prodcos are maxed out at $50 million]. It felt like a trap door had opened under my feet.

I think a mistake a lot of writers make it to take such a death pronouncement at face value, lick their mortal wounds and then go back to the drawing board. Me, I'm pretty stubborn, like a pit bull with a pot roast. They say "no," I hear "maybe," and keep on going.

Rest of the summer I kept turning what my agent had said over and over in my brain. Like a lot of screenwriters, I had loved comics back in high school but then put them aside for more "serious" reading once I started college. I'd basically lost touch with that medium and world so had no connections, but being somewhat resourceful, in September of 2004, I pitched CS publisher Erik Bauer about interviewing all the movers and shakers like David Goyer, the Wachowski Brothers, Kevin Smith and Joss Whedon who were riding the stampede convergence of movies, comics and games. Basically, Erik was nice enough to let me go back to school on the company dime. *-) The 2000 word piece appeared in December, 2004 and was well-received. Some of the guys who were interviewed said, "Hey, if you ever need anything ..." You should never say something like that to a screenwriter 'cause you just know that we're gonna make you pay up. So one of those guys read my script and then gave me a hit list of mid level publishers which I went out to after taking another pass through on the script. Part of that pass included: submission to CI which came back strong and had some great suggestions; a table read with actors and a firing squad of fellow writers. I figured that I needed some heat on the project so gave myself two weeks to do a final polish and then submitted the script to the Houston Worldfest competition where I'd won two top awards previously. It won the Gold Remi, and with that in hand, I went to the hit list. This was May of 2005. 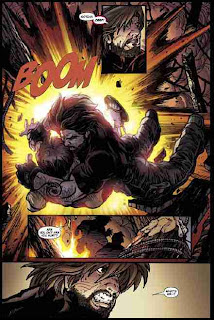 Basically my pitch was that I was a Hollywood writer/producer with an original series already in good shape for a movie. For any indie publisher interested in a toe hold in Tinseltown this project would make a lot of sense. For Atlanta-based Dabel Brothers, it did and we cleared contracts in two weeks -- about three weeks after I'd won the Worldfest award. I really clicked with both Les and Ernst Dabel, and by end of June, we were already hiring artists and rolling up our sleeves to adapt the screenplay to comic script form which Mike Raicht, a former editor at Marvel, took point on. Lance Laspina, with X-Men and mad game industry credits, handled art direction.

The process itself was very similar to being in production on a movie. Les, Lance and Mike gave me a crash course in comics and I got up to speed pretty quickly. We were working with talent literally all over the planet and with five issues to produce, there was always something coming in or go out. Every morning I'd roll out of my bed and immediately turn on the computer before going to take a whiz. There'd be work or emails coming from the Philippines, South America, the UK and all over the US. I LOVED it.

CI: It took two years for Prey to get released--but now it's out and distributed by a little company called MARVEL. Must feel pretty good. But what took so long?

ML: The book was due out last June, but by then Marvel had expressed interest in merging Dabel Brothers into its publishing family. Turtles on Valium move faster than corporate mergers, so we had to patiently bide our time until last September. After that, it was just a question of lining up our place in the Marvel pipeline.

CI: Tell us what you think of the book -- what do you love about it? Anything that could have been done better?

ML: I'm thrilled with Prey: the book. Publishers Les and Ernst Dabel moved heaven and earth to make sure we had the best people. The result speaks for itself. Excellent art and production values right down to the paper stock and custom fonts. No compromises. Creatively, the book truly is its own entity. Artists Bong Dazo and Alex Sanchez are hugely responsible for that.

It definitely takes a small army to make a book like Prey. The process has been such an amazing journey that after awhile the book assumes its own identity apart from the creators.

CI: But the party's over for big action specs, huh? The economics have changed so that big budget action specs rarely sell unless they are from source material, and even getting agents to shop them is like pulling teeth.

ML: That's very, very true. But with Prey, you can produce and print it for $50,000, which is a lot of money to you and me and even Marvel, but isn't much by Hollywood standards where a studio exec's annual bottled water tab can exceed the GNP of Ecuador. However, any time someone makes an investment in a project, Hollywood sits up and takes note. Having a produced graphic novel means you're that much closer and further along in the process because the book is basically a story board of the potential movie. Studios can truly "see" the movie Prey now. Also, movies like Sin City and 300 prove that you can green screen a stylized visual adaptation for about half the price of a traditional genre film. So suddenly, Prey is viable at $55 million and audiences will accept its stylized look because it makes visual sense, whereas it might not without the underlying graphic novel. 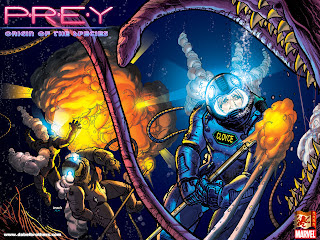 CI: Do you have any other graphic novel projects coming down the pike?

ML: Yes, we're doing an issue #1 of Blackwater for Marvel and Dabel Brothers imprint. And I've also agreed to do another Project X graphic novel that we hope will be right for Samuel L. Jackson.

CI: You originally developed this script with CI. Did any further development take place? What changes had to be made for the graphic novel format?

ML: CI was a crucial part of the development of Prey. Again, the results speak for themselves. Besides CI, I went out to five trusted readers, plus did a table read with actors and colleagues. Writer/director/producer Travis Pike of the Alameda Writers Group (alamedawritersgroup.org) hosted a Whole Script group every couple of weeks and I workshopped Prey there. Community is so crucial. I built the project systematically and know that I had support the whole way. My name may be on the book but there are many, many people who contributed in large and small ways. To me, that's what it's all about. I love to create but the journey with my fellow travelers is really where it's at.

Adapting a screenplay into a graphic novel is a distillation process. Only the most quintessential visual and dialogue elements survive. Meanwhile, a little more exposition is required to help the 2-dimensional format along. Also, Prey the screenplay was written for a target audience of, say, 18-28, whereas most broad based graphic novels skew slightly younger. So we had to make script changes to compensate.

CI: Great stuff, Michael. We wish you continued success. Any parting advice for our readers?

ML: Never say die. Don't take crap from anyone who puts down your writing. Always believe in your work and have the patience and faith to make it all it can be. Give it every chance you can. Don't wait for your career to "happen." Modern Hollywood agents and producers aren't about building careers so much as validating success. That "success" isn't a sprint but rather an endurance race whose pace you alone set, which you run with your colleagues. That's what keeps me grounded when things get tough.