Coverage Ink/Writers on the Storm Newsletter

COVERAGE INK'S BIGGEST SALE EVER. In celebration of the launch of Writers on the Storm VI, we are launching one monstrous sale. From now until 9/23/12, our standard analysis (for features) is 99 BUCKS. That's a $30 discount! TV writers, you'll receive a flat $20 off our already ridiculously low TV coverage prices. And to sweeten the deal, all orders will receive a FREE copy of our 80-page 2012 Coverage Ink Spec Format & Style Guide, the craft bible used in screenwriting classes throughout the US. So now you have no excuse not to get your material ship-shape before the storm hits. To claim your discount, submit your script at www.coverageink.com and use the code CIPRESTORMSALE! in the text box.

WRITERS ON THE STORM RETURNS 9/24. WOTS is back and bigger and badder than ever!
Sounds good? Yeah, we thought so!

As always, there are two ways to enter -- directly into the contest (at http://writerstorm.com,) in which case you will receive feedback at the end of the contest; or if you submit your script to Coverage Ink for analysis during the contest period (9/24/12-1/1/13), your entry into Writers on the Storm is FREE. ('Consider with Reservations' or better for script advance to the QF round.) Last year's winners Brooks Elms + Glenn Sanders have been hip-pocketed by a major agency and their new comedy is out on the spec market as we speak! And WOTS 4's runner-up Jeremy Shipp was signed by UTA and is now staffed on ABC's Family Tools. Get ready: Storm season is upon us! 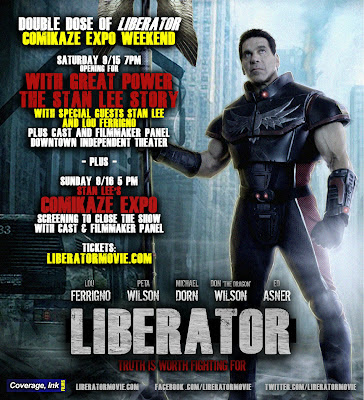 LIBERATOR DOUBLE WHAMMY AT STAN LEE'S COMIKAZE EXPO. Coverage Ink Films' new 18-minute short film LIBERATOR is slated to screen not once but twice at Stan Lee's Comikaze Expo in Los Angeles (aka "Comic-Con LA.") On Saturday 9/15 LIBERATOR opens for WITH GREAT POWER: THE STAN LEE STORY, at the Downtown Independent Theater, with panel featuring filmmakers of both movies and special guests Stan Lee and Lou Ferrigno; and we are also screening at Comikaze Sunday 9/16 at 5PM, with a panel afterwards again featuring Lou.

LIBERATOR stars a bunch of genre icons -- Lou Ferrigno (The Incredible Hulk,) Peta Wilson (La Femme Nikita), Michael Dorn (Mr. Worf from Star Trek) and the legendary Ed Asner (Up). Ferrigno portrays a disgraced, washed-up ex superhero whose secret black ops past comes back to haunt him as he tries to put his life back together. LIBERATOR premiered last month at Holly Shorts (out of competition) to tumultuous response. Get your tickets now at http://www.liberatormovie.com!

COVERAGE INK PRESENTS: THE TOTAL MOGUL HOLLYWOOD POWER WEEKEND. How do you end up hobnobbing poolside with Hollywood's power players? By hobnobbing poolside with Hollywood's power players. The Total Mogul Hollywood Power Weekend is a totally new kind of premium event brought to you by Coverage Ink and producer Steve Longi, whose credits include Face/Off and Struck By Lightning (Glee's Chris Colfer's new movie.). It is not a seminar. It is not a pitch fest. It is three days of education, schmoozing, empowerment and access, poolside at the Hollywood Roosevelt Hotel. It's glitz and glamour, but most importantly it is opportunity. We'll bring the industry and take care of everything. You bring yourself, your projects and your desire to get your inner mogul on. The Total Mogul Hollywood Power Weekend begins October 19, 2012 and we are limiting it to ten participants. Read all about it at http://www.mogulweekend.com. 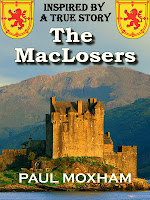 MOXHAM GETS ENTREPRENEURIAL. We love this! Writer Paul Moxham, the honorary mention from Writers on the Storm 4 who got signed by manager Kathy Muraviov (who sold a spec this year! But not one of Paul's,) has decided that instead of sitting around waiting to hear back from various people on his projects, he'd create his own source material. Moxham has taken several of his screenplays and rewritten them as e-books and is now selling them on Amazon.com. Now, when a producer expresses interest in one of his projects, he can say, see, it originiated from a book (which incredibly carries more cachet than simply the screenplay by itself.) Plus he might even make a couple bucks for his efforts. Moxham's efforts look slick and pro, so we wish him the best of luck! You can see all of Paul's books on Amazon right here.

TRACKING B: FINAL DEADLINE! We've been remiss on letting you guys know about the deadlines for our favorite non-Writers on the Storm contest this year -- but it's not too late. The Tracking B Feature Script Contest is one of the top contests out there -- WAY better than many of the big name contests you all know. Why? Because TrackingB.com is a real-life, honest-to-Jehosaphat movie industry tracking board, subscribed to by agents, managers and producers. The industry panel who reads the winners is jaw-dropping. And pretty much every year, one or more of the winners gets signed, produced, etc. Plus every double contest entry receives a free 1-year subscription to trackingB.com, an absolutely indispensible resource for any writer serious about marketing themselves and understanding how the biz works. Hurry! You have until 10/28. Enter online at www.trackingB.com.

CI CLIENT MAKES SUNDANCE LAB. Prashant Nair, the director of award-winning feature film Delhi in a Day (developed with CI analyst Billy Fox, credited) has been named one of five people accepted into the Mumbai Mantra-Sundance Institute Screenwriters Lab. The lab is a result of an agreement announced earlier this year between Robert Redford's Sundance Institute and leading Indian business group Mahindra + Mahindra, a $7 billion company. The participants will be mentored by a spectacular list of talent, including Michael Goldenberg (Harry Potter and the Order of the Phoenix), Kasi Lemmons (Talk to Me), Anjum Rajabali (Rajneeti), Howard A. Rodman (Savage Grace), Malia Scotch-Marmo (Hook), and Audrey Wells (Under the Tuscan Sun.) Way to go, Prashant! And by the way, CI client Nilesh Patel is also short-listed for the group. Kick butt, guys!