So let me tell you about this little project that we’ve been masticating, somnambulating and respirating for the past two years. It’s called MALEVOLENT. And it’s one of the first, if not THE first, US-made animated horror movies. We like to describe it as Saw meets Groundhog Day.

Tanya Klein and I, the two partners in Coverage Ink Films, are all about the DIY. We realized years ago that the best way to make movies is: to make movies. As writers, we are led to believe we are powerless. We send out scripts, and we hope that someone signs us or the script sells. And then when it doesn’t, it’s back to the drawing board -- again and again. Well, phooey on that. Long live the new paradigm: writers getting it done.

Tangerine was shot on an iPhone and is now on Netflix. An iPhone. We didn’t think very much of Tangerine, but the point remains.

So we dipped toes in the producing waters with a couple of shorts, both of which were big-time learning experiences. The success of our short LIBERATOR (still screening at Comic-Cons and festivals) led to meeting Cindi Rice and Paige Barnett, producers at Epic Level Entertainment, the company behind hit web series Bite Me for FearNet/Machinima, Dungeon Bastard and Space Guys in Space. We met with them to discuss collaborating on a live-action horror/sci-fi movie called Malevolent, and that's when Paige spun our heads with this: “Have you considered animation?”

Nope. But DING DING DING! Boy, it set off alarm bells in our heads. Firstly, I have a degree in animation, but had never worked in that area, instead choosing to pursue writing. Secondly, had anyone ever done an animated horror movie before? Well, in Japan, sure, but not the US. And last but not least, doing it as animation removes the whole “just another low-budget horror movie” stigma -- it’s hard to get people excited about them. But animation? Well now, that is a whole 'nother kettle of carp!

One little thing: animation is massively difficult, time-consuming and expensive. How could we possibly afford an animated feature film? Well, the truth is: we can’t. We have our own internal financing here at CI, but two years of work on this incredible project have tapped it dry. So now we turn to Indiegogo, and to you guys, to help us over the finish line!

MALEVOLENT isn't just a genre movie. It has something to say, and plays with themes of hope vs. hopelessness, redemption, social commentary and above all, finding the power within to fight back, even when the deck is so ridiculously stacked against us. This is a message we feel strongly about. That said, it’s also a kick-ass, twisty, insane journey you won’t soon forget. And the press is responding, with articles on dozens of sites like Nerdist and Dread Central and even a segment on CNN The Buzz Today!

And that brings us to Indiegogo. We have a crowdfund going on right now, and it’s all hands on deck. We’re seeking $45K for finishing funds. Hand on heart, we must ask for your help. Even a small contribution makes a huge difference.

See, we have an anonymous matching donor who has offered a $5K contribution if we can reach 200 donors by end of this week (Sunday, Feb. 28.) As of this writing, we’re at 153. I’m assuming this donor wants to make sure the project has a certain momentum before contributing (and grabbing a producer credit in the process!)

On top of that, consider the "Gogo factor.” This is the metric that Indiegogo uses to determine which campaigns get featured in their newsletter. We’ve been told number of contributors counts towards this factor in a big way. IF we can get into the Indiegogo newsletter, then our chances of this campaign being successful skyrocket.

What’s in it for you? Oh, and there are some groovy perks for contributors, too, including original signed art, merch signed by Mr. Shatner himself, and even a chance to be drawn into our movie as a character.

So you see, that dollar or two from you counts for way more than just a couple bucks. It’s momentum, and it will help us score $5K! So please, friends of Coverage Ink, drop a dollar or two on us. We will be immensely appreciative, and the Great Bird of the Galaxy will shine her fulminating awesomeness upon you.

Much love (and animated horror) to all!

P.S. One more thing. We know there may be a few of you who have a bit of investment capital. We are offering producer’s credits and involvement in our project, starting with Associate Producer credit, and going all the way up to Executive Producer. We’ve discounted the Associate Producer credit for a limited time -- regular price $2500, now only $1999. So if you want to lock down a credit on an exciting and unique project, then check out what we’re up to and join the team.

The fall 2016 Get Repped Now! delivered an awful lot of creamy scriptliciousness. Nine scripts made the cut -- seven features and two pilots. After giving our ‘considers’ time to make revisions based on the coverage, we pulled the trigger and sent the scripts to our manager panel :
And the nine considers are:
For those not in the know, Coverage Ink’s Get Repped Now! is our twice-yearly promotion (every spring and fall) where for a limited time, every feature script or TV pilot that garners a ‘consider’ rating for script is forwarded to our panel of managers, who have promised to read them personally. They do this because they trust our judgment, and we pre-vet the scripts for them, so they know we’re not wasting their time. In the past, we’ve gotten folks like Brandon Barker and Joey Ernand in the door at places like Benderspink and UTA, not to mention a spec sale to Disney.

Now we have to play our cards close to the vest at this point, but here’s where we are at with the current batch of considers. Bear in mind we have not heard back from all the managers about all the scripts yet, so this information is partial. 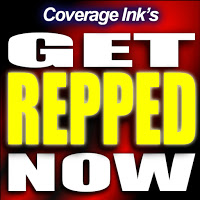 Script A - Has made it past one manager and has been elevated to the next level. It is now being read by a teammate.

Script B - One manager loved the writing but felt it might be a tough sell. However, he is setting up a phone call with the writer (!)

Script C - Another manager liked the writing and requested another writing sample from the writer.

As soon as we have something more tangible to announce, we will, but let’s cross fingers and pull for all our Get Repped Now! considers!


And for everyone who didn’t make the cut last time, do not take it personally -- steel yourself and come back and hit it again. Persistence, and the ability to listen and learn, are the two biggest keys to success in the biz. Get ReppedNow! begins again April 18, so start getting those scripts polished up, or blow us away with something brand-new. We’re all waiting on the awesome. Now it’s up to you. Bring it! 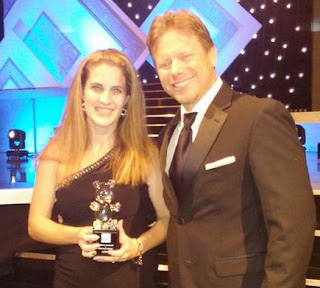 We're very pleased to report that our client Katherine Craddock's script AMERICAN EXODUS just won the $50K grand prize from MovieGuide for Inspiring Screenplay by an Established Filmmaker. "American Exodus" (formerly "Band of Angels") was written as a part of Alex Metcalf/Tim Albaugh's UCLA classes and is also a Nicholl Quarterfinalist, a BlueCat Quarter Finalist, and a Second Rounder for the Austin Film Festival. It also scored a Consider/Consider from us here at Coverage Ink.

Logline: Escaped slave Harriet Tubman rescues enslaved fugitives as a conductor on the Underground Railroad in the 1850s – but with a $40,000.00 bounty on her head and the law against her, can she risk her freedom one last time to free her own parents?

The script is now out to the industry. We're super stoked about this one and of course, we'll keep you updated. Go get 'em, Katherine! 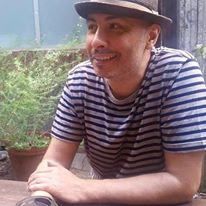 And the hits just keep on coming! Our pal and client Jorge Rivera was just named as a participant in the Fox Writers Intensive Program for 2016. The program aims to provide a pathway into the biz for minority writers, and is a year-long training program where the participants work with industry mentors and are groomed for staff writing jobs in TV. at the end of the year, one of the ten participants receives a Fellowship and will receive a development deal with a Fox-affiliated company. Every participant receives an invaluable hands-on education and guidance into a writing career, and many Fox Intensive alumni have gone on to become staff writers and show creators. As well, participants are sent to public schools where they work with young writers to develop and stage their material. we couldn't be prouder of Jorge, who has put in serious sweat equity to earn his slot. Way to go, dude!