Is the latest version of the story structure software based on Blake Snyder's best-selling book series the hook and ladder company your screenplay needs?  Coverage Ink's roving correspondent Ebony Jones dons her veterinary garb to give this Cat! a thorough check-up.

I admit I’m a little biased. I had been eagerly awaiting the opportunity to try out the new Save the Cat! 3.0. According to the late great Blake Snyder, this is “the only story structure software you'll ever need!” And he’s not lying. I’ve mentioned in other reviews that I’m big planner. Before I delved into my first script, I read Snyder’s book Save the Cat! I ran to Target and bought the corkboard with the color-coded index cards and the thumbtacks. I felt like Luke Skywalker with my light saber ready for screenwriting war. I was determined to battle the Dark Side of no real plot or no theme or no motivated hero. All I needed was a character and place and I had this! But then I came to realize that I’m more of a visual person. I need to be hands-on to actually see and do this process step by step. 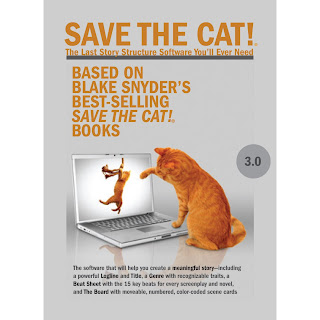 I was lucky to attend a 2-day workshop where I learned and utilized the principles from “Save the Cat! Strikes Back” which is a third book in the series that expands on the Blake Snyder beat sheet template (BS2) and helps to give your script even more depth. After I left that workshop, I wanted something more. I wanted a one-stop planning software where I could implement the BS2 concept and easily maneuver between genres and lengths. Save the Cat! 3.0 software does all of that.

I won’t get into too many specifics about the formula itself because I really want to encourage you to read all of Blake Snyder’s books before even touching the software. Reading the books will give you a better grasp so you can fully utilize all of the bells and whistles that this software has to offer. Thankfully, the software has a thorough video tutorial as well as an excerpt from Chapter 3 of Save the Cat! Strikes Back so you’re not thrown to the wolves. While the BS2 concept is simple, it is a unique writing experience. You'll get the hang of it quickly, and once you do, you'll find it indispensable. There's a reason why so many prodcos in town use Save the Cat! as their bible.

Let me highlight the parts of the software that I find to be the most beneficial to my writing personality. Some people like to just fire up Final Draft and crank out a script. That’s fine and nothing wrong with that at all. Keep in mind that Save the Cat! software is not a screenwriting software. There is a tab on the notes cards labeled “script” where you can write out the script as it applies to the corresponding index card if you must get it down on paper. But the script writing function is nothing extensive. Conveniently, if you do use the script function, you can export that script from the BS2 software into Final Draft 8. If you have an already written script and want to see how well it conforms to the Blake Snyder beat sheet, you can import it from Final Draft into the BS2 software and it will create the scene cards based on your scene headings. Slick. 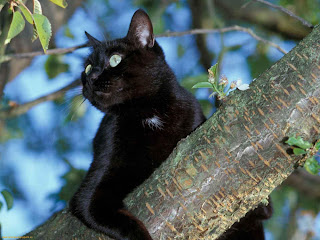 The concept of the BS2 beat sheet (which you can download for free right here)  is to get through the whole planning process from beginning to end without any glaring omissions or plot holes. If there are holes in your BS2 then you don’t have a strong enough script. The first thing you start out with is the title and logline. You can either do a short logline, a long logline, or both. Again, don’t cheat the software by just putting anything to move onto the next round. Treat it like a game of Super Mario Bros. Play hard to get to the next level. I love that you’re forced to get this right from the start. I spent a day trying to come up with a good logline. It’s painful but you’ll pat yourself on the back later. You’ll also need to pick your genre. Don’t worry. Everything can be changed, so nothing is written in stone. And then the software walks you through the process of figuring out the key 15 plot beats (hence, the 'beat sheet') that constitute the structural underpinnings of your screenplay. Once you've got that down, it's on to the corkboard, where you'll structure the details between those 15 beats -- the 40 scenes that make up your movie. Don't worry, it's easier than it sounds. The software holds your hand, but it does force you to think (trust me, fellow writers, this may seem frightening, but is a good thing.)

Each note card allows you soo many pieces of information to pile on including your characters, setup, pay-offs, attachments, notes, and locations. Each card is a scene so you can put all of those elements of that scene on that card. But the key is, you have to fill out your 15 beats before you’ll be allowed to move on to The Board. This is the way they prevent you from rolling into a screenplay with half an idea but no idea where you're going. When you move on to The Board, it prompts you as to whether you wish to just fill out the 15 cards or the 40 cards. If you’re starting a script from scratch, I would recommend doing the 40 cards because it’s a thorough writing journey in terms of filling in your characterization and plot. And the 40 cards also help denote where there are emotional and conflict changes in your scenes. If there’s no change to a scene, then there’s no reason to have the scene. This marvelous feature literally forces you to properly structure your screenplay and think everything through in advance.

The feature that I love that isn’t illustrated in any of the books is what beats should fall on what pages if your script length isn’t the standard 110 pages. What if you’re writing a TV show where the script is maybe 55 pages? This is where the software is a godsend. You can change how many pages you have allotted for your script. The BS2 and “litter box” will change according to that number. So your script will always be proportionate to the three-act structure no matter the length. Conversely, got novel? STC! does, and this same feature will break down your manuscript of up to 1,000 pages, placing all the beats in the correct places.

Other features include adding notes and color-coordinating the card according to the story type. So if you have a B story or even a B + C story, you can track all of these stories and/or character arcs along with your A story to ensure that all of the stories are aligned and will fall on the correct beats. Version 3.0 includes a redesigned interface where you can see all the elements at the same time in the same window, an all-new multimedia corkboard that allows you to "tack up" videos, sticky notes, links, pix, you name it, 10 pre-made genre templates, over 100 tips and tricks, and my favorite, a 50-point "greenlight checklist" which I found invaluable. They even have a Save the Cat! Cloud for file storage and portability.

There is much more to explore so I hope you take the opportunity to try Save the Cat! software on your next script or even to improve a script already written. The main thing to keep in mind is that if like many of us, you often launch into a script without having "broken" the story or worked out all the main story beats, you may well find yourself adrift in Act 2 with no clue how to continue. The brilliance of this method is it forces you to Get It Right, like it or not.  But trust me, by the end of the process, you will like it. Save the Cat! 3.0 can't help but improve your screenplay structure, and if you ask me, that is one neat cat trick.

Save the Cat 3.0 software is available for PC and Mac.

Ebony Jones is a 2001 graduate of Cornell University's School of Hospitality with a degree in business communications.  She has completed her first unpublished novel Sierra Phillips: Swimming in Blue Liqueur as well as a short story, When Ariel Lost Her Voice. She has finally tackled restructuring the dramatic screenplay she's been working on that has now gone from When Momma Dies to untitled since the mother no longer dies.

We always love it when clients tell us their success stories, especially when it's with material that's a little outside the box. Writer Suzanne Kelman tells us that her spec script MAGGIE THE BRAVE was optioned by MovieHatch. "They partner with Broken Road, Red Wagon and Tribeca," says Kelman. "The movie is in development right now." The script also won Best Feature Comedy Screenplay at the 2011 Los Angeles United Film Festival.

Set in 1978, MAGGIE is a quirky British comedy about an aging, single, self-absorbed hypochondriac who is about to be thrown out of her government housing and relocated to an awful retirement community--unless she can find a husband within three weeks.

"(They are) in the process of attaching the talent and the director," says Kelman. "One thing I am realizing about screenwriting is it take a looooog time from script to screen. I should have started writing when I was twelve just to get something made in my lifetime."

Kelman, whose book Big, Purple Undies (cowritten with her sister Louise) sold over 50,000 copies, is currently working on a new script called VIOLET SKYE with her writing partner Rose Woods. Well done, Suzanne! We'll be keeping an eye out for the likes of MAGGIE.
Posted by Admin at 1:36 PM No comments:

Why There Will Never Be a Ghostbusters III 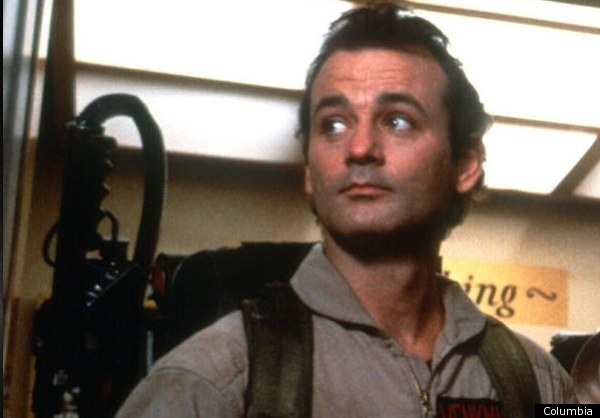 Moviefone's Mike Ryan hits it out of the park with this great assessment of Bill Murray's career, as well as the economics and other factors that drive sequelitis. Did you know that Murray only agreed to be in Ghostbusters as part of a trade deal with the studio to release his passion project Razor's Edge? These types of "one for you, one for me" arrangements are commonplace in Hollywood, and its how folks like Clint Eastwood and George Clooney have gotten some of their best films made. Unfortunately for Murray, Razor's Edge tanked, but his shrewd method of damage control (creating a semi-reclusive bon vivant/iconoclast-type persona) helped ensure that his icon status remained intact and that he didn't become Chevy Chase.

Most interestingly, we learn why despite Dan Aykroyd's best efforts (and a halfway decent 2009 videogame that reunited the cast for voice work,) there will be no Ghostbusters III... at least, not until the inevitable reboot. " It's so hard to get everybody together. And we're so much older," said Murray. "There's a lot more hair dye being used this time. When it's face-lift time, we'll have to quit." Ryan then points out that this quote is 23 years old. Fascinating stuff. Check out the article right here.
Posted by Admin at 2:50 PM No comments: