Onward to the Expo!

We're packing up our show and taking it on the road this weekend... off to the LAX Marriott (NOT the LA Convention Center, as my pal Lance Gilmer so helpfully pointed out... D'OH!) to yet again coordinate the CS Open Live Writing Tournament at the Screenwriting Expo. For the fifth straight year, Coverage Ink will be coordinating this event. Got 90 minutes? Want to win $5,000??? Seriously, one of the CS Open participants is going home with 5 frigging grand for writing a couple of scenes this weekend.

So if YOU want to win, buy a ticket (I think they're 8 bucks) and stop by the CS Open room at the Expo and try your luck. We'll give you a scene prompt, and then the CI team will evaluate your scene based on the following criteria: Structure, Originality, Dialogue and Style. The top 10% move to round 2, and then the top ten to round 3. Then the top 3 scenes will be performed live on stage in a staged reading at the Expo's Closing Ceremony. The audience--probably about 1,000 folks--will then vote on the winner. And since we will be using PAPER BALLOTS and not electronic voting machines, you can be sure that the scene you vote all for WILL be the one that wins... ahem.

So if you're going to be at the Expo, stop by and introduce yourself! Look forward to seeing everyone at the CS Open!

It’s out of control, folks.

Someone asked me last week what’s the single biggest problem I see over and over with submissions to Coverage, Ink? My reply didn’t take much thought: “%#$@&*!^& ensemble scripts.”

Allow me to clarify. See, this is what happens: a writer begins a script with a good idea of the story he wants to tell. But something happens along the way. As the writer crafts the story, he explores the secondary characters—winds up giving the secondary characters a subplot. Before you know it, the secondary characters are competing for screen time with the hero. At some point, the writer realizes this. But instead of going back and fixing the problem, he rationalizes, “Well, hey, it’s an ensemble.” Next thing you know, we have four or five or more main characters, each with their own storyline, all competing for screen time. Reader disinterest is the inevitable result.

Let me make this as clear as I can: when it comes to ensembles, DON’T DO IT. There are only a small handful of these films that ever get made, and they’re generally done by auteurs such as Altman. Does Hollywood ever make them? Very, very rarely, and hardly ever do they sell as a spec.

Part of the problem is it’s such a difficult balancing act to pull off. It’s far easier to follow one protagonist’s story scene after scene, than it is to juggle a handful of major characters, any one of whom could be considered the protagonist.
I learned this, as I learn everything, the hard way. Some years back I wrote an action ensemble script on assignment. The idea was to make “The Dirty Dozen” using the top 8 low-budget action stars at the time—all together in the same movie. So I wrote “Hauser’s Renegades,” a fun, sprawling caper action/ensemble film. And it was a nightmare to write.

The problem was that Hauser was very much the hero, but all of the other parts had to be significant enough to get the other stars--all “names” in their own right--to commit. It was the balancing act from Hades. I finally pulled it off after much much, hair-pulling and rewriting. And that was an action film, with a very standard track-down-the-bad-guy A-leads-to-B-leads-to-C plot. If I was to try the same approach in, say, a dramatic script, forget it. I know that quite honestly, I could not pull it off.

You might be surprised at how many scripts CI gets in where our main note is, “Focus on the protagonist. He needs to be in every scene--and the scenes he is not in should be ABOUT him.” Following this simple advice--and pretending ensemble movies never, ever existed and are simply NOT an option to you--will go a long way towards curing the ensemble epidemic and keeping your audience invested in the hero’s journey--where it belongs.
Posted by Admin at 4:34 PM 1 comment: 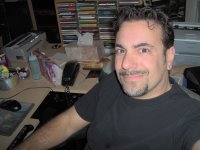 It’s been a month since we sent out the Writers on the Storm writing contest’s winning scripts and loglines to our list. What we’ve seen so far has been very interesting.

First of all, the process is turning out to be an ongoing one, as opposed to a “fire and forget.” I’m pretty sure that’s a good thing. There are a lot of scripts from our top ten out still there, still getting read. Just in the last week, two companies from our list finally responded and asked to read some of the scripts. Sometimes it takes these guys awhile. No problem.

As for the responses, one of our top ten, and two of our honorable mentions, have gotten meetings so far; several more will be getting some phone meetings, and more will be assuredly coming down the pike. We’re still waiting to hear back from many companies regarding our winner, Rational Panic, and we have a solid if not huge number of our top tens also getting read, which we are staying on top of, too. In short, it’s still too early to tell exactly how much of an impact our very first little contest will have--but we’re feeling pretty good about it so far!

Of course, we’ve gotten some passes, too. No big deal, since passes are a daily fact of life in Hollywood. The important thing is that even if the material is not for a particular company, hopefully the craft and the voice impress them enough to get them in the door… and by being easy-to-work-with and personable, even a pass could turn into opportunity.

One comment made by a producer/manager struck me. He read three of our top ten, and he said to me that while he liked the writing, none of them had “the big idea” he can go sell--by that, he meant something that is so obvious that it shouts to be a movie. Now I have several responses to that. The first is, that is exactly the sort of limited thinking that gives us the same warmed-over lameness we see at the theatres. Surely any of us can name a boatload of movies with a concept that some might not
consider extraordinary which have gone on to be exceptional films. “American Beauty” leaps to mind. But the second thing I think is that, sadly, he’s probably right.

This month was the 5th anniversary of my taking over the Agent’s Hot Sheet column for Creative Screenwriting magazine. And believe me, that five years has been an education and a half! I’ve really come to see just how the representatives think. And it is true, particularly when trying to sell movies to the studios, that concept is all. Producer Dan Ostroff once told me he’d rather have a script with a phenomenal idea and iffy execution than one with a so-so idea and astounding execution. Because,
you see, they can always hire a “closer”--someone like Paul Haggis or whomever, who can come in and rewrite the script. When it comes to actually selling a spec, high concept’s a big, big thing.

And so I could see that producer/manager’s point. While I believe that many of our top ten scripts would make great movies, several of them would require thought and time to market properly and, well, a lot of folks out there are resistant to making that investment in a “baby writer.”

So what’s the big idea? Well, that’s important for sure. But I believe original voices will ultimately build a career, too, and maybe even a better or more sustainable one, than if you just have the next easily pitchable high concept—“it’s 'Porky’s' in Abu Ghraib!” or whatever. So hang tight--more to come!
Posted by Admin at 11:12 PM 6 comments: