The Black List is out, and you all should read it.

Compiled annually by Overbrook Entertainment exec Franklin Leonard, the Black List is a compendium of industry favorite scripts, voted on by over 290 industry reps and executives. Each nominator selects ten scripts; a script must be listed a minimum of five times to make the list. Scripts are then rated not by #1, 2, 3, etc., but rather, by the number of votes it received. For example, this year's top script "College Republicans," about young Karl Rove's first forays into election fixing and manipulation, scored 49. The list has become a selling tool for representatives as it can be instrumental in building heat around a writer as well as a representative.

In other words, making the list is kind of a big deal.

Used to be that the scripts on the Black List were overlooked or undiscovered gems, but as of late, many of them have actually been set up. Some are even already in production (a Black List rule is that a film cannot be released in thetears in the same year its nominated.) Included on this year's list are big 2010 spec sales like Jeff Bushell's comedy "Ricky Stanicky" and Dante Harper's manga-based sci-fi actioner "All You Need is Kill." But for writers whose script may have been well-liked but perhaps not gotten the traction it deserved, making the list represents a second chance.

So why should you guys be bothered? Well, of course, you should all be students of the biz. If you're trying to storm Hollywood, one needs to have battlefield intel. But most importantly, one can get a real feel for the types of material that excites the industry by reading the list. Sure, there are a couple of clunky premises on here that make you groan, which were no doubt saved by great execution. But there are also loglines on here which just 'zing.' For example:

DARK MOON, by Olatunde Osunsanmi --"Using found footage, the story speculates that manned moon missions did not stop with Apollo 17."

HYDE by Cole Haddon -- "An allegedly rehabilitated Dr. Jekyll is pulled out of prison to help hunt a new monster who seems to be using an improved version of the Hyde serum." And my personal favorite...

KITCHEN SINK --"A human teenager, a vampire and a zombie band together to save their town from an alien invasion."

So study the list well and make sure your story concepts have the same sparkle and Hollywood appeal (assuming that's what you're shooting for, of course.) Check out the Black List right here.

What Killed the Indie Film?

Creepy artwork notwithstanding, Adam Leipzig's article on CulturalWeekly.com, What Strangled Indie Films? is a insightful and incisive look at the state of the indie. Why, despite the thriving film festival circuit, affordable home HD equipment and editing software, and alternative, web-based distribution platforms, are indies moribund? The answer is both simple and complicated, but naturally it all comes down to: money.

Leipzig, a former Disney exec and president of National Geographic Films (March of the Penguins, Amreeka) for the last six years, knows his stuff. This well-researched article really nails it and provides historical context to boot. Part one of a three-part series. Highly recommended! Click here to check it out. --Jim C.
Posted by Admin at 1:40 PM 1 comment:

Letter of the Week - '"Zombiebland"

Phil writes in with an amusing rant about a recent horror hit... 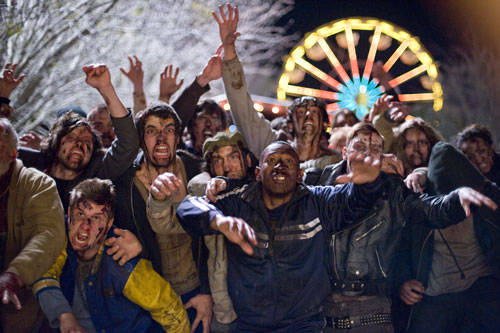 Okay, so usually I forget all about screenwriting rules whenever I watch a movie.
Not so with Zombieland.
What's up with that movies second act and its obvious lack of conflict?
It was basically just the protagonist and his companions goofing around and getting to know each other.

And that scene where Bill Murray got shot? Come on! Talk about a dumb practical joke. Obviously there was a huge risk that the protagonist would've shot him.
It wasn't a practical joke gone wrong -- it was suicide! That scene violated one of my personal rules: Never give the audience a reason to roll their eyes and say, "Yeah, right!"

And did we really need an entire slow-mo montage depicting the characters tearing that curio shop to pieces?

I mean, yeah, it's nice to see characters relax and blow off some steam, but that usually follows after a couple scenes of conflict, where the characters deserve a break, What ordeal did these particular characters go through that they feel entitled to or in need of demolishing a poor curio shop? Sure, they live in Zombieland, but they all seem accustomed to that life, like another day at the office or something. It was also one of those scenes where you cringe and think: Ouch, what a waste of the studio's money. Do these people really need to destroy all that stuff? :)

And the third act: The theme park. The two girls stranded on the ride. Descending toward the mob of zombies below. Their only apparent chance of survival being to shoot that box thing and override the system, thereby stalling the rides descent.
The older sister was the sharpshooter, and yet, when her ammo runs out, she just helplessly looks on while her little sister fumbles with her own gun, trying to shoot the aforesaid box thing. Why the hell didn't the older sister just say, "Hey! Gimme that damn gun, little sister! Lemme do it!"

Okay, I'm done ranting for now. Sometimes I just wonder why or how some things get overlooked in a script. Especially when there are so many people involved in the project.

Very interesting points here. I actually liked this film, but these points are all pretty valid. I'd say this is a combination of a cool premise and a great scenery-chewing performance by the Woodman which made this one hum.  Harrelson's attitude and the movie's sense of fun made me overlook those flaws which in a lesser movie could have been fatal.
By the way, the script was on the Black List (the annual compilation list of industry favorite scripts) in 2007, along with Slumdog Millionaire, The Wrestler and I Wanna F_____ Your Sister (seriously.)
Posted by Admin at 1:48 AM No comments: