WRITERS ON THE STORM TOP 50

Not a lot of easy decisions in choosing this batch, only very very good scripts. Whittling this down to the top ten is not going to be easy. High fives to everyone on this list. By the way, everyone here receives a 1-year subscription to MovieMaker magazine! Drum roll, please... as we proudly present our Writers on the Storm 2009 Semifinalists!

Coming November 2: The TOP 10! Thanks again, everyone!

What a weekend! It's been busy as heck here at Coverage Ink as we finished off the CS Open live writing tournament with staged readings of the top three scenes at the Expo closing ceremonies. Our actors did a wonderful job portraying Mark Poole from Louisville, Kentucky's "Killer Writer/Writer Killer," David Zorn from Los Angeles' "Bad Doctor" and Benjamin Wheelock from Brooklyn's "Part of the Job." Who walked out with the 3 grand top prize? Read on...

This is our eighth straight year coordinating the CS Open live writing tournament. In that time, we’ve given out over $83 billion in prize money – oh, sorry, that’s Goldman Sachs -- and one of our winners, Bob deRosa, has gone on to quite a career. His movie “The Air I Breathe” starring Sarah Michelle Gellar and Forest Whitaker came out last year. So awesome things can happen to CS Open participants -- not just frustration, indigestion and carpal tunnel syndrome!

Now as many of you know, we changed it up a bit this year. In the past, the CS Open was done live in person, with hundreds of folks writing scenes by hand, in pencil, based on the scene parameters we gave them on the spot. Now that was fun and exciting, but there were problems. First off, folks often had scheduling conflicts with other Expo events. Second of all, it kind of sucks writing by hand, and we couldn’t really figure out a way for everyone to do it electronically… until now.

So this year, for the first time, the CS Open became the CSCS Open – the Creative Screenwriting Cyberspace live writing tournament. Big props to Creative Screenwriting publisher Bill Donovan who brought the CS Open back from its near demise earlier this year by spearheading the migration of the tourney to the internet. For the first time ever, folks around the world could participate in the CS Open all at the same time. The response was overwhelming, with entries far exceeding our projections. Of course we had some glitches, too, with mysteriously disappearing scene feedback and so forth. But by and large the process went smoothly, and once we get in there and spackle up a few holes in the system, the CS Open will be back.

Any of us can write a good scene if we have two weeks. But can you do it when the pressure’s on and the clock is ticking? We’re not giving out official numbers, but my Coverage Ink team of industry readers read and evaluated a freaking tsunami of scenes over the last six weeks. These scenes were created by you guys based on our scene parameters, and everyone had 48 hours to get them in. The top 135 or so then advanced to the semifinals, in which they had to write another new scene based on a new, fiendishly hard scene prompt. Then finally yesterday, the top 15 came back to write one more scene for us, from which the CI team narrowed it down to the three scenes that were staged at the Expo closing ceremony. Here is the scene prompt whioch the top 15 had to write their best interpretation of:

Your PROTAGONIST is caught between a rock and a hard place. It's crisis time, and he (or she) needs to make a life or death decision that, one way or another, is going to piss people off. The stakes are high, and doing nothing is not an option. The ANTAGONIST is using this all to make the hero look bad. On top of everything, your protagonist's hands are not entirely clean in this situation. Write the scene in which your protagonist is confronted by his LOVE INTEREST about his involvement in the crisis as he agonizes over what to do.

How you approach the scene--dramatic or comedic--or stage it is up to you.

The audience laughed along as the scenes were performed. Mark Poole’s “Killer Writer/Writer Killer” portrayed a man who’s dating a girl whose twin sister is murdering screenwriters; Benjamin Wheelock’s “Part of the Job” depicted a bank robbery that goes wrong when the inside man, the bank manager, gets discovered by one of the tellers he’s banging; but it was David Zorn’s “Bad Doctor,” a riotous comedy sketch about a pioneering surgeon who accidentally sews up his cell phone inside of a mob boss’ wife, who took home the top prize. Zorn was the only one of the top three in attendance, so it was fitting that he was on stage to accept his prize. Too bad I mixed up the scenes and announced he’d gotten third place by accident! Dur. Great work, David! Bad work, Jim. 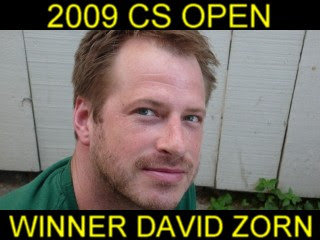 I also want to mention the other 12 finalists who cranked out scene after scene for us, giving up quality time they could have spent slacking or obsessing guiltily over not writing. They are: Pamela Rodeheaver, Doug Peake, David Ivy, Tom Weber, Sean Leonard, Matthew Fleck, Kevin Johnson, Karen Veazey, Scott Noack, Gillian White, Cathy Kitinoja, and Dan Parkhurst.

Sean Leonard receives an honorable mention for the terrific writing in his scene.

Last, I want to give a shout out to our phenomenal team of readers who did an incredible job evaluating the almost frightening volume of scenes. These guys are about the best around. I use them to develop my own material, and their insights are just top-notch -- so Ruchika, Joe, Dylan, Andy K., Greg, and Aaron, big thanks to all you guys. You rock! Anyone interested in finding out more about what we do and our philosophy, check out coverageink.com.

It is with great pleasure that I present to you the top 15 for the Cyberspace Open. **The cutoff was 94.** Yes, this is the highest cutoff in all my years of running the CS Open tournament, and that is a testament to the rock star writing skills on display in this tourney. A ginormous round of applause for:

These guys all wrote terrific scenes with heartfelt mea culpas (per the scene prompt) and really kicked our butts. So be ready Sunday morning 10/17 as the Round 3 scene is posted online at http://www.screenwritingexpo.com/writingtournament.2009.html or in person at the Expo:

For those of you who are not advancing, yeah, maybe it’s a little disappointing. Look, all of you guys have mad writing chops or you wouldn’t be in this elite group I’m addressing right now. Maybe there’s a germ of an idea in that scene that can spark your next spec. Maybe you got a freakin’ 93 and want to strangle us! Ultimately, hey, this was really just a fun little exercise, a little 12-buck get-yer-butt-in-gear-and-write-dammit! bit of motivation. We hope you guys had fun and next time you come back with a vengeance. Bring it! And remember, if you’re at the Expo, please come to the closing ceremonies Sunday to watch the top 3 scenes performed live on stage. It’s a real blast.

Speaking of mea culpas, here’s one from us. We’re using a new system this year, and there were holes. While it worked for the vast majority of folks, others scenes just never made it to us, or the feedback was sent but never received – plus we neglected to post that the easiest way to reach us was info@coverageink.com, which some folks had to figure out the hard way. Sigh. While we attempt to spackle up the leaks before the next go-round, please contact me personally at info@coverageink.com if you never received a round 1 or round 2 scoresheet.

Thanks and regards to everyone, and see you at the Expo!