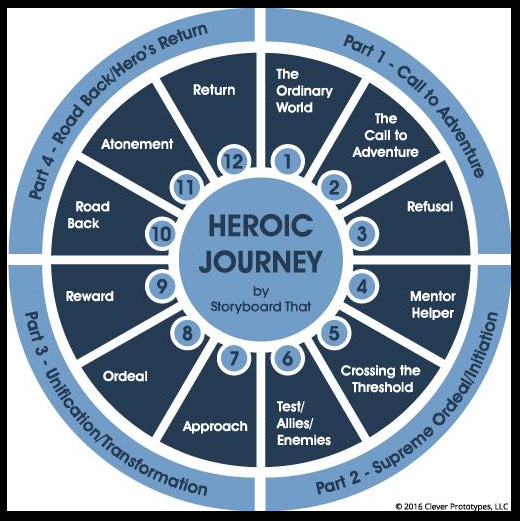 Well, hello, AWESOME! Many thanks to Storyboard That for this super useful graphic.

And what is this thing? Why, it is your feature screenplay structure at a glance. We here at Coverage Ink are big fans of the Hero's Journey, aka mythological structure for movies. Most contemporary movies are based on it, as are bestselling screenwriting how-to books "The Writer's Journey" and "Save the Cat!" So many of the feature scripts we read would be improved if they simply knew and followed the principles of the hero's journey.

Please, folks, don't reinvent the wheel. It's been around for a long time and it works really well already.  That said, you're welcome to springboard off of it and do your own thing, by all means. But you need to know your rudiments first before you can solo.

Now this graphic may take a bit of explanation, so for that we send you off to the aforementioned two books. Ingest them, savor them. Then rejoice in knowing that the guesswork has been taken out of movie screenplay structure. You can pick them up at www.writerstore.com. They are required reading in Hollywood. Do yourself and your writing career a big favor and learn this stuff cold.


Scriptfest returns June 23-25 at the Burbank Marriott, and we couldn't be more excited. As many of you know, we here at Coverage Ink have enjoyed a wonderful relationship with Scriptfest (formerly Great American Pitchfest) for over a decade. We've moderated a series of kick-ass industry panels, bringing no-BS information to the people, direct from the top agents and managers in the biz. This year will be no exception. Yep, there is a ton of knowledge to be gleaned courtesy of a plethora of speakers, panels, and workshops.

But what Scriptfest is really about, of course, is pitching. Sure, there are other pitch events, but no one holds a candle to Scriptfest. It's the biggest, and it's the best. A roomful of execs, just waiting to hear about your projects. If you've been frustrated by the lack of response to queries and feel like no one in Hollywood gives a crap, and that to break in, you need personal connections -- you're right. Scriptfest is your chance to even the odds.

So head on over to Scriptfest and use this discount code to save 10%:

Then start getting those scripts shiny and ready to rock. Connections are only half the battle. It's got to be on the page. When you get the go-ahead to submit, you have one chance to blow people away. Most great scripts take a lot of elbow grease. So visit CI and empower yourself with top-shelf analysis from Coverage Ink, the Industry Experts. Then get in there and make 'em cook.

See you all in June! 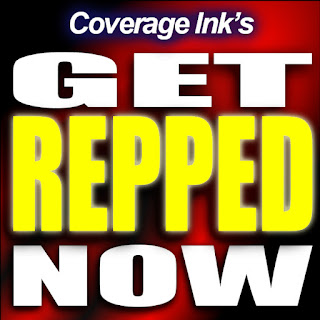 Hi folks, we've postponed Get Repped Now for the time being. We were going to bring it back Spring 2017, but we are going to have to put that on hold until further notice -- likely summer or fall.

We are currently in the final phase of production on our new animated feature film MALEVOLENT and rebuilding our website, and those efforts are taking up all our available bandwidth. Animation is inordinately time-consuming, and we're aiming to have MALEVOLENT done this summer.

Our apologies for everyone who was planning on resubmitting for Get Repped Now, but we will bring it back as soon as we can manage. In the meantime, we're still waiting on results from the last go-round or GRN. One script has been escalated at Industry Entertainment, and another one has drawn the eye of a development exec who is helping us shop it, so we are now in to several more places beyond our original five managers. And another manager has also requested one of the pilots through word of mouth.

As soon as anything changes, we will post it right here. In the meantime, we are still here for analysis and development help as always.

Screenwriters bend over backwards to contrive events rather than embrace the path of greatest resistance. 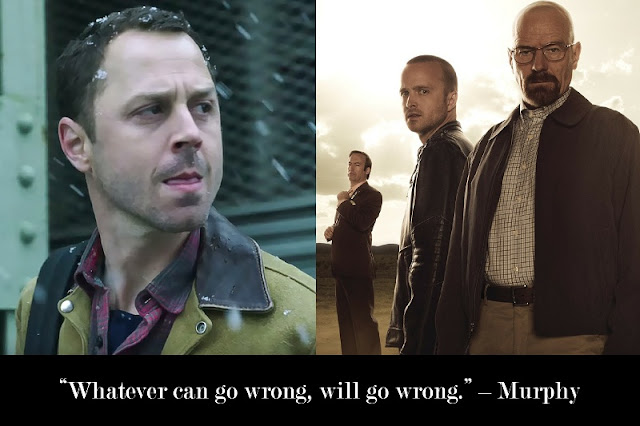 SNEAKY PETE kicks heaping mounds of gluteus. In case you haven't seen it yet (and what are you waiting for?) Giovanni Ribisi is TV's newest con man. Wearing his con lifer status as a badge of honor, Ribisi's character Marius is a startlingly clever professional liar with just enough reluctant heart to win us over. Co-created by David Shore ("House") and freaking Heisenberg himself, Bryan Cranston, the show weaves a complex series of intertwining plotlines that spool out at breakneck pace. You know you're watching a great show when at the end of an episode you can't believe 50 minutes just whizzed by.

Sure, the acting is terrific. Margo Martindale is fabulous as the unglued family matriarch. Ben Vereen is endearing as an old con frenemy. And hey, Cranston himself as the bad guy, delivering savory, messed-up soliloquies? Oh yeah, he is the danger. But the secret to why it all works may boil down to one of the stated themes of the show itself: "work the problem." In true "Breaking Bad" fashion, things never go according to plan. And that, friends, is a beautiful thing.

In "Sneaky Pete," Ribisi has one week to come up with $100K to pay off the mobster (Cranston) holding his brother hostage. He assumes the identity of his former cellmate (the titular "Pete") and plans to rob the family safe. If you think he simply ninjas in after dark and cracks that puppy, incorrecto. In his way are a series of unexpected roadblocks that spiral out of control. When we finally do get that safe open, naturally things don't go as intended. And that's the whole point. "Sneaky Pete" is a "one step forward, five steps back" kind of show. Every attempt to resolve a situation creates a plethora of new ones. There are so many cons-within-cons and interweaving subplots that in the hands of lesser writers, it would likely all collapse like a half-baked poop soufflé.

The heart of every screenplay or teleplay is conflict. As they pounded into our heads in screenwriting school: There Must Be Conflict in Every Scene. Sometimes that means manufacturing some, such as with an insolent waiter or a nosy jackass neighbor butting in. Because if you have a scene where everything is rosy, unless it's ironic, or the conflict exists in subtext, it likely won't be super engaging.

Yet we writers often make things way too easy on our characters. We use contrivances, coincidences to get from point A to C, leapfrogging over all the obstacles that might realistically pop up and impede that path. To obfuscate our manipulations, we avoid having characters ask obvious, logical and/or important questions, hoping the audience won't catch on to our trickery. Hey, we have the story planned out a certain way, and that way is etched in granite (or index cards, as the case may be.) Problem is, Deus ex machina -- the hand of the writer may be apparent. Not the best way to keep an audience engaged. No, we want to see our characters dealing with unexpected awfulness that screws everything up. It's precisely those pressure cooker situations that glue us to our seats.

Besides Cranston, the key unifying element of the storytelling in "Sneaky Pete" and its spiritual brother "Breaking Bad": shit goes south. Seldom can a character accomplish a key task without something going horribly wrong, forcing unforeseen detours and seemingly sidetracking the narrative. Again, these are paths we writers often resist going down. Yet it's by throwing monkey wrenches into the gears and forcing our characters to think their way out of awful jams that the brilliance emerges.

To avoid spoiling "Sneaky Pete," let's look at some situations from "Breaking Bad." Unexpected complications made that show. Take the fifth season train heist, for example. Walt's brilliant plan to rob the methylamine without anyone ever knowing it was stolen goes off without a hitch -- until a good Samaritan shows up at just the wrong time to push the stalled car off the tracks, thus freeing the train to continue on its way before the heist is complete. With the ticking clock now ratcheted up 300%, can the team pull it off in time? And then to "top the topper," as Blake Edwards called it, the little kid shows up on his dirt bike and gets a good look at everyone. The repercussions from what happens next completely change the character dynamic for the remainder of the series and set into action a whole new chain of events. 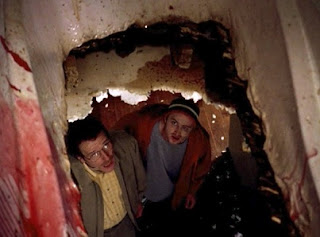 The writers could have  simply let Walt and Jesse dissolve drug dealer Crazy 8 in acid in Jesse's bathtub, and have it work perfectly. It would have been grisly and awful. But the writers escalated the sequence into a work of art by dealing with all the problems that could come from someone trying to actually do this. By the way, "Mythbusters" tried to melt a simulated body and bathtub in hydrofluoric acid. It didn't work. That's the writers, dialing it up.


It's all explained eloquently as one of Marius' guiding principles. When a character gives him a litany of things that have gone wrong and complications that have arisen, making achieving his objective difficult, Marius responds, "So? Work the problem." Which means: whatever happens, no matter how bad, fold it into the ongoing narrative. Assimilate it. If you do that, nothing is a problem -- provided you never let 'em see you sweat.

Writers, that means us.

Rather than avoid the conflict, embrace it. Even if it takes you in a direction you didn't want to go, easin' on down that road may reveal new facets of your characters that make them pop. Be open to allowing the action to unfold organically. How does your hero deal with adversity? Can they think on their feet? Don't make things easy on them!

The infamous Mr. Murphy once noted: "whatever can go wrong, will go wrong." Make sure this is true not just in real life but your writing as well. For us, whatever can go wrong MUST go wrong. It is incumbent upon us writers to find and utilize critical flaws in even the most well-constructed, bulletproof plan and make life as miserable as possible for our protagonists.


Jim Cirile is a writer/producer and the founder of www.coverageink.com, the longest-standing screenplay analysis/story development company in LA.