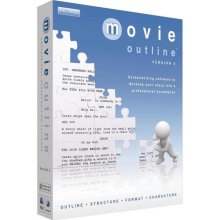 The last time I reviewed Movie Outline 3, I did a comparison with two other screenwriting software packages including Final Draft and Celtx.  Final Draft is considered to be the industry-standard software while Celtx is a free (though they now offer a plus version for $9.99.)  I consider Movie Outline 3 to fall in the middle between Final Draft and Celtx depending on your budget (or lack thereof).  I have used all three and I do prefer Movie Outline.
Recently Movie Outline 3 released a new version called Movie Outline 3.1.2.  The upgrade is free if you're currently a user of Version 3, but if you're a user of Version 1 and 2, you'll need to pay $80 to upgrade.  If you're using Versions 1 or 2, I highly recommend spending the money for the upgrade.
Version 3.1.2 fixes some of those little quirks that tend to slow you down in the writing process like adding auto-convert and auto-capitalization.  They've also added more seamless functions if you're coordinating a script with a writing partner that happens to be an international user.  And if your British friends are driving you nuts sending you scripts that replace the “z” with an “s”, you have the option to ignore UK spelling variations.  All in all, a lot of little grammatical glitches have been fixed in version 3.1.2.
Movie Outline now offers the option to register and submit your script for copyright protection through their software.  I can not tell you how many writers don't even bother to remember how important it is to protect their scripts.  You don't need to be militant about it, but before too many eyes start checking out your hard work, make sure your script is protected.
I have been using Movie Outline 3 for a current script project for a genre that's unfamiliar to me.  And the feature that has really helped is the Drag and; Drop scenes/steps along with the FeelFactor Story Analysis Graph.  It helps me with pacing and it gives me a clear picture of how many scenes I should have in my script.  So if I know I need 43 scenes, I can do a better job of structuring my first draft.  And I feel like it cuts out how many drafts and how much genre research that I need to do.  And these features are unique to Movie Outline.  They've given me confidence with this script that I would not have had without it.
While there are many other improvements to this software, the feature that will appeal to friends of mine that are in a screenwriting software war is the Final Draft import/export function.  This is such an overdue function.  It's like the Mac vs. PC war amongst my screenwriting friends.  One sect prefers Final Draft while the other prefers Movie Outline and neither side is conceding.  So this solves a lot of problems and keeps everyone in their software comfort zones.  Import options have also improved to include PDF, Rich Text, and Plain Text WITH LAYOUT.  Why am I yelling?  Who wants to fuss with the layout of an imported script?  I don't.  So Bravo to Magic Outline 3.1.2 for that addition.  And yes Movie Outline is 100% Windows 7 and Snow Leopard compatible.  See?  We all can get along.  That's why we creative types are so awesome.

Ebony Jones is a 2001 graduate of Cornell University's School of Hospitality with a degree in business communications.  She has completed her first unpublished novel Sierra Phillips: Swimming in Blue Liqueur as well as a short story, When Ariel Lost Her Voice. She has finally tackled restructuring the dramatic screenplay she's been working on that has now gone from When Momma Dies to untitled since the mother no longer dies.
Posted by Admin at 1:21 AM