My Bandwagon Seems to Have a Flat

A somewhat contrarian review of “The Descendants”


I finally got a chance to check out “The Descendants” last week. I’ve been looking forward to seeing this much-lauded movie for quite some time, but life kept intervening. Maybe it should have intervened a bit longer so I could have saved my money and waited for the DVD.

Yes, I’m talking about the same movie that got rave reviews in pretty much every single paper. Yes, that movie written and directed by media-proclaimed genius Alexander Payne and starring everyone’s favorite ex-E.R. physician, George Clooney.

Despite my snarky attitude, let’s start with the good stuff: the acting throughout is believable and on-the-money, with all of the actors making the most of what they were given. Some of the shots show flashes of brilliance. The oft-mentioned scene of George Clooney’s Matt King racing down the street in his omnipresent flip-flops, wobbly and panicky, is indeed as good as everyone claims it is. It tells us in one very funny shot everything we need to know about what’s going on with the character at this point in time. Some of the scenes, like George Clooney confronting his now comatose spouse about her infidelity or the jilted wife character (Judy Greer) bringing her flowers, are very effective.

And now, let the griping begin.

My major complaints are mostly script-related. All of the characters essentially remain enigmas. Matt King describes himself (in one of his endless voiceovers) as the “backup parent,” who doesn’t seem to know his kids very well. Why he chose to de-prioritize his family to the extent that he seems to be completely baffled by his younger daughter Scottie’s (Shayla Eve) tantrums, we don’t know. Also, whatever running away from family responsibility he did prior to the movie has clearly stopped by the time the movie starts. In other words, whatever development the character might have gone through happened before we got to see it.

The subplot of the Hawaiian land sale serves as the vehicle for Matt’s supposed epiphany, his new sense of responsibility towards his heirs and ancestors. Yet, we don’t know which particular straw broke the camel's back or if, in fact, there even was one. There is never a moment where Matt journeys amongst the people and experiences what the real consequences of his actions might be. Sure, he gets lectured to from a native Hawaiian woman early on in the script, but we never see how injurious the land sale would really be (a topic covered much better in the film "Princess Kaiulani.") It doesn’t help that a lot of Matt’s supposed character flaws – his father-in-law calls him stingy and accuses him of not treating his wife, Elizabeth, like he should -- are talked about as opposed to shown. These are all "Show, Don't Tell" screenwriting violations, of course. Since we don’t know this character or his motivation or his Achilles’ heel or really anything else about him very well, we have a hard time feeling for him and going along for the journey. Matt never arcs. He comes to a moment of decision where he does do the right thing, but the only thing motivating it is a minute of staring at photos on his wall (his ancestors) rather than any personal journey.

Speaking of which, the journey lost me before it got rightly started. The inciting incident – the older daughter, Alex (Shailene Woodley), telling her father about his wife’s infidelity – didn’t strike me as believable. Completely apart from the setup – she just happened to see her mother walk into a house with a guy in a completely different part of town where she happened to pass by (hey, okay, you‘re allowed one coincidence per movie) – what didn’t ring true was the situation in which she told her father. A 17-year-old semi-rebellious teenager might throw that into her father’s face in any number of situations: a fight, a visit to the hospital, him trying to assert parental authority or any number of other scenarios would all work fine; unfortunately, sitting in the living room and having a conversation after Matt tells his daughter that her mother won’t come out of the coma isn’t one of them.

The character of Alex also, regrettably, has no arc or transformation at all and remains quite enigmatic throughout the movie. I originally expected her slacker friend Sid, who unaccountably is always at hand, to serve as her vehicle for change. But that didn’t happen. In fact, Sid seems to be one of those characters that fit squarely into the "use him or lose him" category.  Just who IS this guy? Is he sweet on Alex? Why does she keep him around? How does she know him? And if he's such a good friend, why wouldn't Matt know who he was? Throughout the movie, we keep waiting for the character of Alex to grow and mature out of being rebellious and difficult and self-centered, traits she seemingly adopted as a defense mechanism to dealing with her mother's infidelity and her father's disconnection; and we expect Sid to be the person who facilitates this. None of this ever happens, and in fact Alex simply stops exhibiting those behavior patterns for no reason that I can tell. As charming as the actress is, this role is an epic fail as far as the writing is concerned.

And as for Scottie, well, there's no "there" there either. That's 0 for 3. She never arcs or comes to begrudgingly accept her father; they never have that tear-drenched heart-to-heart where they at last connect; nothin'. Towards the end of the movie, on their way home from confronting Elizabeth’s lover, Matt and Alex talk about the fact that they haven’t broken the news of her mother’s diagnosis to Scottie yet. A few realizations hit me at this point -- one, that I had all but forgotten about Scottie, because the character was so underdeveloped and her issues never addressed -- two, that I hadn’t even realized that they hadn’t told her yet (and it really didn't make a difference) and three, that I really didn’t care. 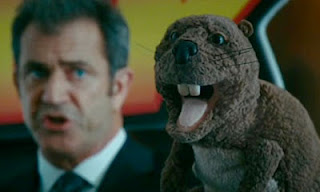 A few days later, I saw another film, this time on DVD, that’s been on my list for a very long time, “The Beaver” – yes, my list is a bit backed-up – starring Mel Gibson and directed by Jodie Foster -- and it made me think about the vagaries of this business. Even though these two films cover very different ground, both deal with families in turmoil and transition and specifically, fathers who have difficulty connecting with a difficult high schooler who has written him off. But "The Beaver" does all that in a much more original and creative way. The writing, directing, and acting is as good as it gets; the script by Kyle Killen, a Black List fave, paints every single character in three luscious dimensions. Yet, when it came out – thanks to Mr. Gibson's minus numbers on the likability scale – it didn’t get any kudos. "The Beaver" is a superior film to "The Descendants" in every way. In this business of bandwagons and public perception, have we gone so far astray that most emperors are nude while anybody wearing clothes is relegated to the DVD bin? Yes, George Clooney is charming and still handsome, while Mel Gibson hasn't aged well and his off-screen antics are appalling. But this is the man who directed "Braveheart," and you know, he can still act up a storm. Gibson's performance is arresting; he rips open a vein in "The Beaver". Clooney sheds a single tear and kinda coasts a bit in "The Descendants". The performances are not even in the same league.

But of course, we like Clooney, and we don't like Gibson. So there you go. As for "The Descendants," one kind of hopes to exit the theater after seeing a critically lauded film feeling more than, "Eh, it was okay, I guess."

Tanya Klein is a CI story analyst, teacher and screenwriter. For almost a decade she ran a theater company in NYC, and she was the second unit cameraperson on Coverage Ink Films' LIBERATOR. She is currently working on the script for CI's first feature "TWISTED."


Back to Newsletter
Posted by Admin at 12:54 AM

Thanks for that. I was wondering about The Beaver because Jodi Foster usually does interesting things. Another really good small movie by Millinium is Puncture. The writing is so tight, the scenes so well constructed and the emotional wallop is profound even as the movie backs away from every hackneyed tear jerking trick as fast as it can. I watched it twice in two days just to take notes on the story telling. Give it a look over if you haven't yet. Its on dvd now.

I agree 100% on The Descendants - I'm glad to hear I'm not the only one who feels that way about it. A screenwriting Oscar nom? Really? I've looked on in disbelief as it has accrued such heavy praise and so many award nominations. I guess what Clooney wants, Clooney gets.

I too am very relieved that other people are not blown away with this movie -- I was starting to wonder if there was something wrong with me. What really killed me was the excessive voice-over at the beginning -- talk about telling instead of showing, and the ironic thing is, the acting's so good that it's not needed (which just makes it that much more annoying). Just watched Up in the Air again, and it is a superior Clooney vehicle in every way. Special thanks for mentioning The Beaver -- more people need to see this movie and ask themselves a very difficult question: "Is it okay to admire Mel Gibson's actions on-screen while despising his actions off-screen?"

Another great Descendants review, this one by Patricia Ducey. Check it out!

Thanks for the great review on this movie. I agree. I'm trying to remember who Scottie is.