WE SHOOT THE WINNER/WRITERS ON THE STORM SUPER TEAM-UP! Wow, this reminds me of the great comic book team-ups I loved as a kid. You heard We Shoot the Winner's Chris Soth and Writers on the Storm's Jim Cirile on their teleseminar "The Five Myths of Screenwriting Contests," right? (Click here for the podcast.) Well, until midnight 8/21 EST, if you enter We Shoot the Winner, you will also be entered into Writers on the Storm at no additional charge!

And why do we like We Shoot the Winner? Because they are the ONLY contest that offers this prize: they will produce the winning script. See, this ties right back into the DIY theme in Jim's opening letter. Of course, the entry fee is higher than a regular contest, but the trade-off is you have MUCH less competition. Their regular entry fee is $297, but they're also discounting that $50 just for CI Newsletter readers. So for $247 you get both WSTW and WOTS, and that, folks, is what we call a deal.  Click HERE to enter We Shoot the Winner and get your complimentary entry into Writers on the Storm -- with a $10K grand prize and 150 participating companies. Bang-zoom double-whammo! Hurry -- ends midnight 8/21.

But hey, if you cannot afford to enter both contests, then enter Writers on the Storm now at Without a Box. Final deadline remains midnight 8/21. There will be no more extensions.

WRITERS ON THE STORM QUARTERFINALISTS (SO FAR.) Wait. the contest hasn't even ended -- so how can we have quarterfinalists already? 'Cause anyone who submitted their script to Coverage Ink for analysis before 7/31 was automatically entered in Writers on the Storm for free. Those who scored 'consider with reservations' or better for script became automatic quarterfinalists. We thought this would be roughly the top 10% but actually it was more like top 7%. Yeah, our readers are a tough crowd! Obviously, we show no favoritism to Coverage Ink submissions versus regular contest entries.

So, a shout out to our current Writers on the Storm 2011 quarterfinalists to date:
And the CI MOST IMPROVED Award goes to Cecelie Berry, who has worked tirelessly on Entangoed, submitting draft after draft and really digging in every single time. It's one think to make a tweak or two and call it a draft, but it's another thing entirely to really roll up your sleeves and get down in the muck and work on the plumbing. The most recent draft scored Consider/Consider and prompted CI Senior Analyst AP to comment, "It’s refreshing to read a thriller with as much rich character work as ENTANGOED features. The roles are juicy and detailed and are really the heart of this story." Way to go, Cecelie!

But that doesn't mean she's won it, folks. Far from it! The field is still wide open. So, everyone, remember you have until midnight 8/21 to resubmit a polish draft to the contest (if you so desire) at our Without a Box page. BRING IT.

AGENT'S HOT SHEET - LIVE! COMING TO SCREENWRITING EXPO. If you read Jim's column in Creative Screenwriting, you know that every issue he interviews some of the top agents and managers around and delivers the skinny on what's going on in the biz as it pertains to writers. Join us as we assemble an all-star panel of motion picture lit representatives and grill them on how the hell any of can ever get their attention. Sunday 9/18 at 11 AM. Register online at screenwritingexpo.com.

WOTS RAFFLE WINNERS. We've been giving away two free contest entries into Writers on the Storm every month since launch. So congrats to our final two winners: Cole Stennis and Emily Shostak. We've already contacted them both with instructions on how to submit their scripts. Nice going, you two! That's it for the freebies for now, but next month we will have a killer Fall Spec Season coverage SALE.

INKTIP PITCH and NETWORKING SUMMIT NON-REVIEW. Mea culpa time. The good folks at InkTip.com invited us to their pitching event back in July. They were proud that they'd made many improvements since last year's event and were eager to get us back, since we'd previously reviewed the first Pitch Summit for Script magazine back in January. They even asked us if we could helped them set up, which we of course said we'd be happy to do, especially since they were offering us a table. So we rolled into the Burbank Marriott that Saturday at 5PM... and found them packing up. The event was over. What the hell? Yeah, see we kind of assumed their 2-day event was Saturday and Sunday, with the classes on Saturday and the pitching on Sunday, rather like Great American Pitchfest. Well, you know what they say about when you assume. Turns out the classes were on Friday and the pitching was... yeah, you guessed it. So we totally blew it. Sorry, InkTip! So if any of you guys attended the event and want to let us know your thoughts, go ahead and comment here at the end of the newsletter or else email us at coverageink@gmail.com. Now on to Golden Pitch at the Expo, which we're pretty sure starts at 2 AM on a Tuesday night... 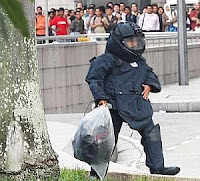 WRITER BOMBS IN ATTEMPT TO GET SCRIPT READ. Don't do this! (Beverly Hills) A writer desperate to get a movie script read suffered the ultimate rejection Thursday when police blew up a briefcase he said contained the screenplay after an agent refused to read it, police said. The bizarre story was set in Beverly Hills, where a man visited the office of a literary agent and left behind a briefcase that he said contained a computer, police Sgt. Brad Cornelius said. The man left instructions for it to be delivered to someone at the business, who told another person in the office, "This guy's been kind of pestering me to read his stuff," and said he neither asked for nor wanted the briefcase, Cornelius said. A security guard took the case into an alley, and a bomb squad was sent to investigate. Officials sealed off one square block and evacuated dozens of people from businesses on nearby Rodeo Drive and Santa Monica Boulevard before blowing open the briefcase, which contained no explosives. Police detained the man suspected of leaving the briefcase and were questioning him, Cornelius said. His name and other details were not immediately released. (AP) 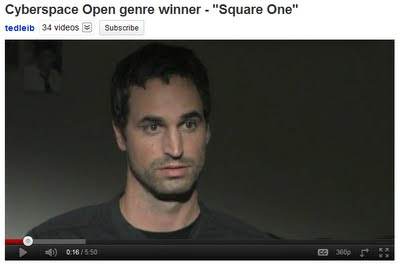 DIY IN ACTION. Ted Leib was one of the Genre Prize winners (horror/thriller) in this year's Cyberspace Open. Though his scene "Square One" did not advance to the top three to get filmed, he did what we've been advising all of you guys to do -- he went out and shot his damn scene anyway (hey, do we detect a theme building here?) Ted sent us the link with this note: "I shot the genre prize winner with a teacher and student I work with at the Orange County High School of the Arts. I think it came out nicely. Would you have any interest in putting a link to it in your newsletter?" Why, yes we would, Ted, and nice job! Check out Ted's scene on You Tube right here.

MEET THE NEW SUPES. As Superman purists, we here at CI were excited when this first pic of Henry Cavill as Superman in Zack Snyder's "Man of Steel" was released last week. Here was a big step forward from the lame costume from "Superman Returns." The "S" shield is classically styled, a good size and appropriately close to the clavicle, and the cape looks exactly like the comics, not like a dark red rubber... thing. The boots are the correct shape and design as well. And while Cavill was missing the spit-curl, well, he still looks good. But then we saw the CLOSE-UP. 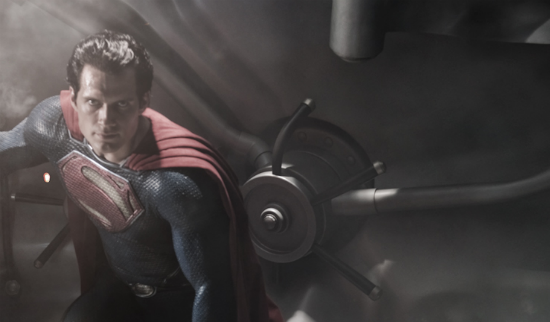 Um... so is this Superman, or Aquaman? Because his costume seems to have taken on some sort of rubbery scales. Perhaps in the reboot, Superman comes from Atlantis and rides a seahorse? Hmm. Well, this is the trend in superhero designs lately -- unnecessary texture. The costume for the Spider-Man reboot seems to have been designed by Spalding. Seriously, the bloody thing looks like it's made out of basketballs. In related news, Sony just realized that their new Spider-Man, Andrew Garfield, is 27, so they've fired him from the sequel and will reboot the series again next year with yet another origin story starring the kid who plays Brick on "The Middle."

CYBERSPACE OPEN 2011 WINNERS! ER... NOT YET. Crap. Well, we'd hoped to bring you the winners of the Cyberspace Open, but as of press time, Creative Screenwriting was not ready to announce them. Voting closed July 31, but you can still watch the final three scenes (written by Michael Hedrick, Elisa Graybill and William Shank) right here. CS tells us they should be announcing the winners shortly, so sit tight, folks...

WAY TO GO, RICK! Big hat-tip to our pal Rick Jaffa, who with his writing partner Amanda Silver created "Caesar," which later became this summer's best Hollywood movie, "Rise of the Planet of the Apes." I first spoke to Rick for my article skewering the incredibly faulty WGA arbitration process for Script magazine last year. At that time, he told me a little bit about "Caesar" off the record, and expressed his hope that the movie was going to come out well, since everything seemed to be rolling along smoothly. As a big fan of the Apes series, it is awesome to see a fellow fan do the franchise justice, especially after the latest abortive attempt by a certain director with the initials TB. Hail Caesar!