Every up and coming writer dreams of breaking in. But what then? Here’s how to keep from going broke as a successful writer. 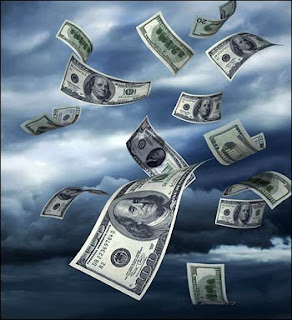 Ah, the life of the Hollywood screenwriter – fame! Fortune! Okay, not so much fame. But still – fortune! Right? Heck, your spec script could sell for a million dollars. Unlikely, but it could happen. You could become a production polish guru netting $250,000/week. Unlikely, but it could happen. Or you could sell your script for WGA scale plus 10%, then melt down into a neurotic mess for the next ten months until the next check, any check, finally comes in.

Likely, but it could happen.

Welcome to the scintillating world of Mo’ Money, Mo’ Problems (with apologies to Notorious BIG.) We’re serving up the good, the bad and the ugly of how the whole money thing works for successful writers. We’re not even going to talk about being an up and comer, since as we all know, your writing income during that time is called “day job.” There’s no shame in that, and in fact it’s part of the deal, so suck it up -- and I said extra whipped cream in my Java Chip Frappucino, thanks. But once you finally do claw, scratch and furrow through the reinforced battlements surrounding Hollywood, it’s a good idea to have a clue what to expect.

THE PEOPLE WHO TAKE YOUR MONEY

Let’s say you sell your spec script for a cool $100,000. Nice, right? But how much of that do you actually pocket? The answer is $425.32. Okay, okay – kidding. But not as much as you may think. Tere are a lot of people with their hand out – agent, manager, attorney, WGA. And don’t forget least everyone’s favorite uncle (Sam) who desperately needs your money to keep blowing people up around the world. Here’s the breakdown: 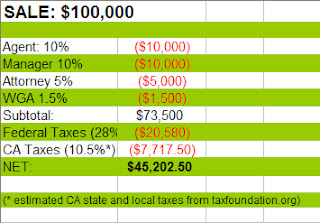 Poof. Your six-figure payday is now the average salary of a llama groomer or a junior high janitor. The picture is exponentially worse if you have a writing partner. Each of you would net $22,601.25. And let’s not even discuss the 10% sales tax on anything you buy in Los Angeles. Oh, did I mention the $2,500 WGA West initiation fee (mandatory with any deal with a signatory)?

Uh... okay, that pretty much sucks. I know what you’re thinking – who needs all those hangers-on? Well, you do.

AGENT – It’s possible to get a deal without an agent, to be sure. They generally do next to nothing until you’re already established anyway, and then after you’ve done all the heavy lifting yourself, then they come aboard. You may be able to roll with just a manager and an attorney, especially if your manager is a former agent and has solid connex in town. But managers cannot legally negotiate for you, whereas agents can (or a manager/attorney combination could save you big bucks.) But when you’re starting out, the more people you have on your team, the better. Agents come with relationships, and those can be key not only to launching your career, but also introducing you to the town.

MANAGER – You don’t necessarily need both an agent and a manager. But what’s also true is that generally speaking, agents won’t give you the time of day, whereas managers will take your calls and help you develop your script until it’s good enough to land the agent who will then likely ignore you in the first place. If by some miracle you score an agent without a manager’s assistance, you’re either extremely lucky or your college roommate just happens to work at WME. But even in this scenario, you’re likely destined to be just a name on an 80-person list the agent can’t really bother with. Managers exist to provide that handholding and development most of us actually need but don’t think we do, to get us ready for prime-time as well as eventually get us the agent. So yeah, you don’t need to shell out that extra ten percent. Except you kind of do.

ATTORNEY – Five percent for an attorney? Trust me, that’s a deal. What can an attorney do for you that an agent can’t? A lot. They can build in bonuses and protections into your deal that agents sometimes miss or can’t be bothered with. If you get a piece of the merchandising of your film as well as box office performance bonuses, it’s because your attorney went to the mat for those. He is your “bad cop.” You certainly don’t want to be a d-y-c-k to the company who bought your project, and your agent may not want to ruffle too many feathers there either. But lawyers have no compunctions about ripping into the rapacious studio business affairs guys (whose job it is to screw you and delay payment in every possible way.) They act as your pit bull. You can certainly do a deal without an attorney, but you’ll likely get bent over most majestically.

So what's a working writer to do? Make as much money as possible while you can, obviously. The better the work you do, the more you’ll make. And if your quote is $250K and you’re getting two of three gigs a year, heck, even with everyone’s hand in your pocket, you’ll make out pretty well. So now the main thing is to try not to sabotage yourself, and to learn to financially cover your ass.

Many of us are assume that once we’re in, we’re golden. Er, not so much. ICM agent Emile Gladstone says the average life of a screenwriter in the biz is about five years. There are factors both within and out of your control that conspire to railroad your career. First up: ego. Think you can keep your mouth shut when idiot producers make you rewrite your draft (uncompensated) for the 26th time? Can you suck it up and say, “Thank you, sir, may I have another?” Because it is exactly that ability that defines the successful writer with a long career. Seems obvious, right? But when you are in the thick of it and can’t take it anymore, you will rationalize a teeny little outburst. And in one fell swoop you could kill your career – no one wants to work with anyone perceived to be “difficult.”

And beware the trap so many writers fall into – not writing. We harangue our reps to keep shopping material the entire town has already passed on. Many a career has been killed by writers simply failing to write.

Worst of all: heat. One day you are hot; the next, brrrr. And it can happen in no time flat. Maybe a movie you wrote comes out and tanks. Maybe the town simply gets bored with you. Or maybe you’ve worked on a couple of assignments but the execs didn’t love the results. Everyone talks, and word will spread, and before long, poof, the heat is off. And when you are cold, brother, you are Godzilla-frozen-in-a-glacier cold.

Sooner or later, the gravy train will derail. You need to have a strategy for how to handle that.

Okay, you’ve banked a couple hundred grand and are working steadily. What you need to do now is grab the snazziest suite in the Bellagio to celebrate your success and cruise in there in your smokin’ new Bentley Arnage. Buy an expensive house in Pacific Palisades with a heated pool and hire a staff. Take your pals to expensive dinners... in France. Oh, my God, did any of you believe any of that? Surest way to disaster. Many a writer has done exactly these things, only to wind up a one-bedroom in Van Nuys in short order.

So: diversify. Sure, we’re talking saving and investing, but that’s just part of it. Sock money away in the best interest-rate accounts you can find. Invest, but beware the volatile market – many of us lost good chunks of our life savings in the past few years. But also think about developing secondary and tertiary revenue streams. In other words, develop ways to make money immune to the vicissitudes of the movie business.

Maybe there’s an investment property you can buy – land, or perhaps an apartment building where the rents cover the mortgage every month and you make a little profit on top. Maybe you’re a closet cake boss. You could open a bakery and hire a manager to run it for you. Perhaps you can partner in your cousin Aloysius’s start-up electric dog polishing service. Because when your writing career gets cold, it’s nice to know Barky’s Wash & Wax will cover your rent! We all have interests other than writing – baseball, renaissance faires, study of ancient Latvian dentistry manuals. Find a way to monetize it. Putting all your eggs in the screenwriting basket is the surest way to eventually crush a marriage and land you in therapy (which you will not be able to afford.) Please consult with a trusted investment professional before investing in anything. We at Script magazine are not financial advisors and are not making specific recommendations.

IF ALL ELSE FAILS

So now you’ve seen that despite your best efforts, despite years of dedication to the craft, your exciting new career may end sooner than you thought. What to do when that happens? Go to ground and plot your comeback. Take the time. Maybe it’s six months. Maybe it’s two years. Your next salvo is going to be incredibly important. It could reinvigorate – or permanently sink – your career. And then, when you are absolutely certain that new piece of material is tight enough to bounce quarters off of, then contact your remaining industry pals and casually ask them if they’ll check out your new spec. The great thing about being a writer is that a sizzlin’ new spec can re-energize even the iciest career.

And remember, there are plenty of ways to be a writer. Consider TV, novels, childrens’ entertainment, plays, etc. Bang out a 5-page comedy sketch and put it up on YouTube or Funny or Die. Something you could generate in a weekend could wind up going viral. Same principle – shoot a short and take it on the festival circuit. Win a couple awards and suddenly it’s a whole new ballgame. Travel magazines are always looking for writers and pay damn well. Dash off some articles and submit ‘em. Write about that expensive dinner you flew your buddies to in France. And hey, there is no shame in falling back on that barista gig.

The good news is it has never been easier to jump-start a flagging career if you’re smart about it. Just make sure you’re realistic about what to expect from the movie business, and remember: downtown Culver City does need a pizza joint.