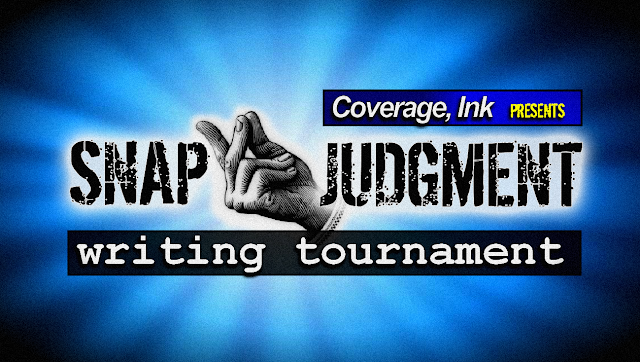 Fans of the CS Open and Cyberspace Open: get ready to be happy. Coverage Ink is bringing back the concept with our new Snap Judgment Writing Tournament. Details are still being worked out, but we expect to launch this August.

For ten years, we ran the unique and exciting CS Open (later the Cyberspace Open) writing tournaments for Creative Screenwriting. We gave writers a tricky scene prompt and a short amount of time to write their best interpretation of that as a scene or scene unit (under 5 pages). CI readers selected the top 100, and then after a second round, the top 3. Winners were chosen via online voting.

As most of you probably know, financial difficulties forced Creative Screenwriting to shutter last year.

The new Snap Judgment Writing Tournament is inspired by the Cyberspace Open but is not affiliated with Creative Screenwriting. We are pleased to be able to bring back our favorite tournament concept -- as well as add in some Coverage Ink special sauce. Some things will remain the same: the tournament will be online, the scene prompts dastardly. The top three scenes will again be performed by actors and put up on YouTube for the world to vote on. But this time, in addition, the winner will work with Coverage ink to develop a fully realized short film, pilot, or feature film screenplay based on the winning scene. We will then alert the industry.

One other improvement is not really a change at all: rather like the original CS Open, you will be able to enter the tournament up to four times (and write four separate scenes based on four different prompts.) And as with Coverage Ink's Writers on the Storm Screenplay Competition, entry to Snap Judgment is FREE with any screenplay submission to Coverage Ink during the contest period (dates to be announced.)

The brainchild of Creative Screenwriting founder Erik Bauer, The CS Open began as a live writing tournament at the annual Screenwriting Expo. We gave participants 90 minutes to write their best interpretation of a scene prompt we gave them on the spot. The top three scenes were then performed live at the Expo closing ceremonies, where the audience voted on the winners. Over 5,000 writers wrote tens of thousands of scenes, each one read and evaluated by the Coverage Ink team. Those scenes have resulted in dozens of produced short films and helped launch the career of 2004 winner Bob DeRosa, who went on to write Killers and is now writing on White Collar.

In 2009, the tournament was renamed the Cyberspace Open and moved online, where many more writers from around the world could participate via the internet (and not have to hand-write the scenes like in the live event.) Instead of performing the scenes live at the Expo closing ceremonies, the top three scenes were videotaped and posted online for everyone to vote on.