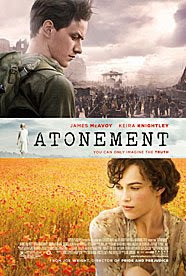 In one corner: weighing in at 111 pounds, multi-Oscar-nominated, universally loved romantic period drama masterpiece “Atonement.” And in the other corner: at 277 pounds and rippling with lean beef, Disney’s fluffy and formulaic programmer about a self-centered pro football star who discovers he has a 7-year-old daughter -- “The Game Plan.” Let’s get it on!

Okay, okay, you’re thinking I’ve totally lost it, right? What the hell am I doing even mentioning kiddie piffle like “The Game Plan” in the same sentence as a Film like “Atonement”? And you’re right to think that -- hence this article, to explain it to all of youse. Because, you see, these two disparate films could learn a thing or two from one another. Astonishingly, I cried during “The Game Plan.” Yet I didn’t shed a single tear during “Atonement.”

Adapted from Ian McEwan’s 2001 novel by Christopher Hampton and directed by Joe Wright, “Atonement” tells the story of 13-year-old writer Briony Tallis (Saoirse Ronan) who irrevocably changes the course of several lives when she accuses her older sister's (Keira Knightley) lover (James McAvoy) of a crime he did not commit. After being hauled off to jail, McAvoy is sent to fight in WW II, his love for Knightley the only thing sustaining him. As years pass, the lovers vie desperately to reunite while Briony unravels from guilt as she finally comes to understand the magnitude of what she did. “Atonement” is a big, beautiful, masterfully written, shot and acted movie that has “Oscar” written all over it. There’s a shot about halfway into the movie that is one of the most spectacular things you will ever see – a 5 and a half minute-long Steadicam shot showing the Dunkirk retreat. The performances are wrenching, and were she not a huge star already, this movie would certainly vault Keira Knightley to stardom.

The interesting thing about “Atonement” from the writer’s perspective is that the structure is unconventional. It doesn’t become clear until about midway into the movie whom the protagonist actually is. We are led to believe it’s Keira Knightley and James MacAvoy’s story -- but it’s not. Further, script tends to jump back and forth in time throughout, a device which we should all be careful of using ourselves, but which works here and allows the story to be told from multiple perspectives, each time enlightening us as to an angle we’d missed previously. It’s quite ingenious, and it’s the exact opposite of formula.

Now “The Game Plan.” Egotistical party-hearty quarterback Joe Kingman’s (Dwayne “The Rock” Johnson) team is on their way to the championships, and Joe's got all the money and fame that a man could want. A perpetual bachelor whose one brief marriage ended many moons ago, Kingman is stunned to learn that a long-forgotten fling has permanent consequences when adorable 7-year-old daughter Peyton (Madison Pettis) arrives at his doorstep. Can a swollen-headed football star adjust to a life of ballet classes, Barbie dolls, and afternoon play dates?

With a script credited to Nichole Millard & Kathryn Pryce (Audrey Wells also shares story credit) and directed by Andy Fickman, “The Game Plan” is formula, top to bottom. There is never a moment when you do not know what’s going to happen. It’s as if the writers simply lifted the template from the Disney, er, playbook, sketched in some characters and voila – instant kids’ movie. And while “The Game Plan” is cute and charming, and features an unexpectedly great performance from the Rock, who proves himself a more than capable actor -- it never really achieves comedic orbit, which is usually the thing that can propel formulaic family comedies to big numbers. The film was a surprise big hit for Disney ($90 million US box office, $22 million budget.) 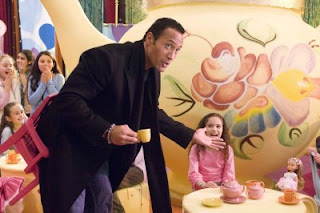 So getting back to the crying thing. For all its wonderful characterizations, wrenching true human drama and heartbreak of “Atonement,” the film never really hit that chord, the one that really resonates and pulls our heartstrings. For a romantic drama like this, I’d expect to emerge a blubbering mess. And yet… nothing. Sure, I appreciated its craft and performances and thought it was a fine, fine film, but emotionally something was missing. “The Game Plan”? I had to leave my seat to run to the theater’s bathroom to blow my nose and wipe tears three times in the movie’s last act! Can you imagine? There I was, fully conscious of being manipulated every step of the way, knowing full well exactly what beats were going to happen and when -- and yet despite that, I was a frickin’ wreck! “The Game Plan” DID hit those emotional beats that “Atonement” did not. We came to care about The Rock’s Kingman and feisty and super-cute Peyton -- like boo-hoo, water-your-eyes-out care.

So what’s up with that? Here’s my theory, and you can feel free to quote (or deride) me: There’s a reason it’s called FORMULA. It WORKS. Even if you know it, understand it and teach it, guess what? It still freaking works. Executed properly, it hits all of us on an emotional level. It’s downright Pavlovian. And I believe “Atonement,” largely due to its unconventional structure and utter lack of formula -- well, I won’t say it doesn’t work, because it does, but *something* is missing. Because we are not allowed to really lock onto a single protagonist, I believe this affects our ability to really bond with the characters and thus really feel for them. Had Mr. Hampton tweaked the narrative to make McAvoy the clear protagonist, and kept him front and center throughout the entire story, the tragic ending would like have hit us all much harder, like “The Notebook” hard. Of course, that would have changed the entire thrust of the story and in fact invalidated its very title, since the atonement we’re talking about here is in fact Briony’s.

Please don’t misunderstand. I would never be such a jackass as to try to impose formula on a literary work such as “Atonement,” and the film’s Oscar contender status clearly shows the film is effective. In fact, I applaud Hampton’s screenplay because, much like Tarantino did, he proves that you CAN deviate from formula and still make a great movie (if you’ve got the chops.) But at the end of the day, a cheesy Disney kids’ movie touched me more deeply than “Atonement” did. Hmm... maybe “The Game Plan” should have been nominated along with "Atonement" and the lamest Best Picture Winner Ever, "No Country For Old men." But that's a whole nother story...
Posted by Admin at 10:38 PM

I must be the only person in the world who thought "Atonement" was complete crap -- and I usually LIKE these kinds of movies. Loved "The English Patient." Thoroughly enjoyed "Shakespeare In Love." Even had fun at "Becoming Jane," which also co-starred James McAvoy (who can be a fine actor, at times). I wasn't crazy about Joe Wright's truncated and wrong-headed version of "Pride & Prejudice" but forgave its sins because of Kiera Knightly's elegant performance as Lizzie.

But "Atonement"...? Total manipulative nonsense tricked up with lots of self-importance masquerading as "seriousness" and "deep meaning." I had to make myself stay and watch it all the way through (I was with friends, who "liked it but weren't exactly swept away").

So contrary to your claim, it was not universally loved. Here's one person with a brain who actually despised the damned thing. Makes me leery of going to see anything involving this director and writer ever again.

I'm curious, Jim - had you read McEwen's novel first? Having done so, I found ATONEMENT lacked some of the punch I might otherwise have felt. I still thought of it as a faithful and capable adaptation, and like you I was impressed with the stagecraft on display during the Dunkirk evacuation. But thanks to its faith in adapting the source, I felt the film suffered the same fatal flaw as the novel: the protagonist, Briony, is unlikeable.

It makes her atonement all the more necessary, thus filfilling the underlying theme, but still leaves her a fundamentally unsympathetic character, and that's death for any story. In adapting the novel for the screen, the writers had to trim out much of the up-front material with young Brinoy that could have given her baffling act more context, but even with that context, the novel fails to make Briony someone we care much about - perhaps we don't like to be reminded that people can be weak.

I will give a big thumbs up to Vanessa Redgrave's turn in the final minutes: she injected both dignity and humanity to the character and the story that had otherwise been lacking. I will frely admit I got a little misty, watching her performance - despite the fact that she's largely providing exposition!

Ultimately, however, ATONEMENT - both in book and film - does make an interesting study of the power of story, both to harm and, ultimately, to heal. But without a more clear - and more sympathetic - protagonist, it's exactly that - a study, an exercise, rather than an exerpeince that we share.

Also like you, I enjoyed THE GAME PLAN. Formula? No kidding - I don't think you can get *more* formula, in fact - but it was capably executed, and the leads were charismatic enough to make us want to watch. Despite shamelessly and obviously manipulating the audience at every turn, it was still a charming picture.

It can attribute its reasonable box-office success (and subsequent DVD sales) to that charm, and to fulfilling the 4-quadrant audience draw by having enough there for audiences young and old, male and female to enjoy.

Great comments, guys. Yeah, I actually have talked to a few screenwriters recently who did not like Atonement. Interesting. And no, I didn't read the book, but from friends who have, they all felt the movie was great--possibly because they're reading in layers from the book or an understanding of character from the page that didn't quite make it to screen.

[Note to self: re-read before posting. "exerpeince"? Ugh.]