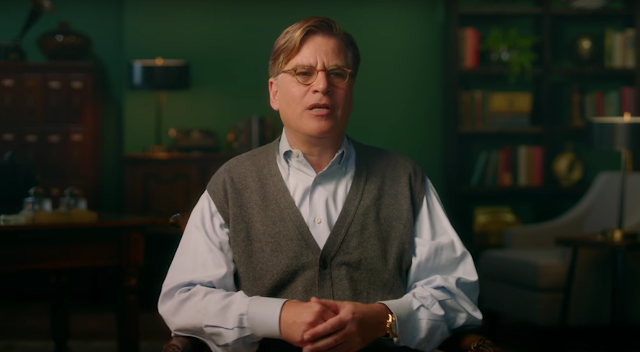 MasterClass.com caught screenwriters' eyes in a big way last year when they launched their Aaron Sorkin video tutorial series. For $90, far cheaper than the cost of most screenwriting classes, we could spend 35 video lessons with the esteemed writer of A Few Good Men, West Wing, and The Social Network, to name but a few.

You've gotta hand it to MasterClass. They have assembled a roster of absolutely top-shelf talent for their video tutorials -- folks like bestselling author James Patterson teaching writing, Hans Zimmer on composing and Gordon Ramsay on cooking. Their videos are lavishly produced and yet intimate -- you really feel like you are in the room with the instructors as they share their tips, tricks and techniques. Take a minute to browse their catalog and you will no doubt see several classes you'd like to take.

So how is the Sorkin? In the style of another cinematic masterpiece, let's break it down:

The Good: Sorkin comes off as thoughtful, easy-going and overall is a pretty good teacher, with a huge respect for the masters of screenwriting who came before him. We get a glimpse into his thought processes and his workman-like style of tackling complex story issues -- such as how to write about real-life people far smarter than he believes himself to be (Steve Jobs, for example.) And there is a lot of content here as well. The lessons are structured in three distinct parts: first, one on one with Aaron, wherein he pontificates on various screenwriting-related topics. In the second section he workshops scripts with five students in a classroom setting. And in the final section, he sets up a pretend writer's room, and he and the students proceed to "break" story for a new West Wing episode. This is a great look behind the scenes of how a TV writers room works and shows how various ideas and story threads are assembled. There are also a few lessons detailing his dialogue process. It goes without saying that this is a no-brainer for fans. 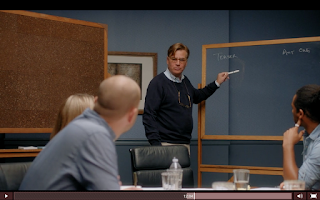 The Bad: Those expecting an actual "master"-level class may be disappointed. While Sorkin himself is unquestionably a master, the class itself is for beginner to intermediate-level writers. Apart from the sage advice to go back and read Aristotle's "Poetics," as it is the foundation of all things story, my partner and I didn't really learn much from the 5-plus hours of videos. However, we're coming at this from a higher level than some.

As well, we felt that while Sorkin was super cool and empowering to the students, some story issues in the workshopped screenplays were missed -- such as a TV series pitch that probably should have been a feature, except that it would be "Rain Man," which is why it's a series pitch -- except it doesn't really work; and another where the concept was just convoluted and broken. Sorkin did target a few of the logic and research issues in that case, but the real note should have been to rethink the premise from the ground up. Although we certainly can't fault him for being a nice guy.

The Ugly: It goes without saying that Sorkin is a brilliant writer. But our main criticism of his work -- that many of his characters sound the same and all speak in that hyper-stylized patter -- also applies to what he teaches. In fact he actually tells us not to write character bios, because that may get in the way of the character saying what you want them to say. That is probably not the best advice and goes to the heart of the problem just mentioned. It results in what we call "non-character-specific dialogue." You should always have a solid idea of your characters and their backstory, because that informs how they speak/behave. In contrast to what Sorkin says, in theory your characters indeed have existed before the movie began. All those life experiences, along with socio/economic status, country of origin/ethnicity, quirks, tics, idiosyncrasies and personality, etc., should inform their dialogue.

He also talks about using page count as a metric to where you should be in your story at any given time, which is great. However, his scripts can run 180-200 pages or more, and that is because they are so dialogue-heavy. In his original draft of "The American President," Annette Bening's character didn't even arrive in the story until the second half of the script -- page 100! Could you imagine if you or I turned in such a draft to a studio? We'd never work again. No wonder all his characters sound the same. When you've got to cram 180 pages of dialogue into a 2-hour movie, that necessitates characters speaking like Gilmore Girls at 78 rpm. Here in the real world, unless you've already got that amazing reputation, it's tough to get feature scripts over 120 pages read -- no matter if your script is dialogue or V.O. -heavy or not.

Lastly, Sorkin can take a while to get to a point. There were times when we'd be shouting out things like "White on the page!" to summarize what takes him a bit of screen time to explain. That said, his ruminations are interesting and insightful and worth the journey.

Conclusion: Sorkin's class is a great look into the mind and process of a true master, but don't expect it to be a master-level class. It is however an affordable and worthwhile experience for those looking to learn the basics and get a taste of Sorkin. Just be aware that we are not all at Sorkin's level, and there are a different set of rules for the likes of us.

I found the classroom setting great for ONE video. The majority of the class is in this context & it was very offputting to spend all this time on them...instead of me. Waste of money.

He gives the crux of his secret away in the promo. Just watch it & you've watched enough.

And if you're not a left winger, don't join the FB community (which you PAID to be in) because they just spout his left-wing politics all over the place without anything to do with screenwriting. If you're a lefty, you'll find plenty of commiserators. If you're not, you'll feel attacked even if you don't participate.

He keeps the politics in check for the most part in the videos except for a brief mention of Trump, acknowledging that there may be people in the room who support him. But look, this guy wrote The Newsroom and West Wing so one should have a good idea of his politics going in.