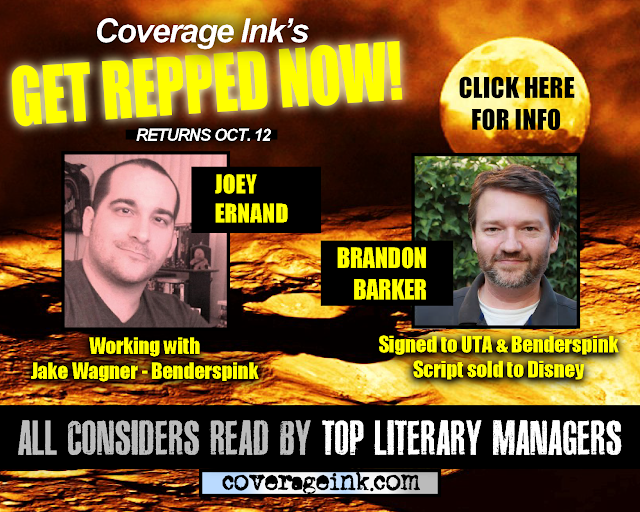 When we launched the first Get Repped Now! a year ago, we never expected it would have quite the response it has had. It's not a contest; there are no prizes, per se. But what we all really need more than anything is access. GRN is a great way for writers to actually get their scripts read by people that matter -- and best of all, put a little wattage behind them as well, in the form of our recommendations and the validation of good coverage.

See, we all know how hard it is to get the industry to pay attention to new writing talent. And you can't blame them, really. Most agents and managers have their hands full working crazy hours and then having to read their clients' drafts nights and weekends. There are only so many hours in the day; who has time to read unsolicited material? Even scripts that are requested may gather quite a bit of moss before ever getting read. Slush pile submissions are the lowest-priority reads -- generally covered by an assistant or intern and only when there's a rare lull in the action. The reps themselves, well, they generally will only read a new writer if it has been recommended to them by someone whose opinion they trust.

So that's where we come in. The first GRN brought us five considers; we knew these writers could make waves. Then Brandon Barker's script blew everything up times infinity.

Barker's period adventure/comedy "Nottingham and Hood" -- sort of a "Midnight Run" in Sherwood Forest -- grabbed the attention of Benderspink's Jake Wagner, who moved lightning-fast. Within weeks, the script had sold to Disney (although we could not announce it for another month,) and Barker had signed with UTA. A grand slam right out of the gate.

Then this year, Joey Ernand scored a triple-- three scripts entered into Get Repped Now!; and incredibly, three considers. Once again, Wagner pounced, and now those two are developing an original project together (read all about it right here.) Can you say "wow"? I knew that you could.

With wind at our backs, it is with great joy that we bring back Get Repped Now! one more time to close out 2015. We're looking for the best of the best -- scripts that demand attention and are great stories, well-told. Our standards are exacting -- the vast majority of submissions will be passes. But in all cases, we will detail exactly how to elevate both the material and your craft in the form of a thorough and empowering analysis of the material. As super agent turned producer Emile Gladstone once told me, "Screenwriting is a craft, like carpentry. It can be learned." And for those of you who land a consider, we will do everything we can to hone your presentation and hype your material.

Are you ready to bring it?

Get Repped Now! runs from October 12, 2015 to November 15, 2015. For complete rules and info, please visit Coverage Ink. We look forward to you blowing us away.