Coverage Ink/Writers on the Storm Newsletter


WRITERS ON THE STORM IMPORTANT ANNOUNCEMENT

Writers on the Storm closes at midnight January 9th on writerstorm.com and coverageink.com. After that we will have a 1-month extension exclusive to WithoutaBox.

This is your last chance to enter the contest at Coverage Ink and get coverage + contest entry for the price of coverage alone. As of 1/10, all submissions to Coverage Ink will receive our usual in-depth coverage but will NOT be entered into Writers on the Storm. From 1/10 until the final deadline (2/9,) the only way to enter will be on Without a Box. Good luck! 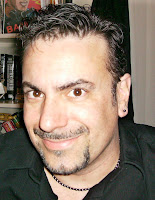 Short newsletter this month (but hopefully no less worth reading.) Last night I finally saw "We Need to Talk About Kevin," the 2011 Cannes darling directed by Lynne Ramsay (Ratcatcher) and written by Ramsay and Rory Kinnear, based on the novel by Lionel Shriver. If you've seen the film, you know it deals with an uncomfortable subject: how can two seemingly normal, caring parents raise a frickin' maniac? But from a screenwriting as well as moviemaking point of view, there are quite a few things worth discussing. Let's do, shall we? WARNING: SPOILERS!

In "Kevin," Tilda Swinton ("Chronicles of Narnia") plays Eva, a mom who cannot connect with her manipulative, sociopathic son, played brilliantly by three actors: Rocky Ruer (toddler,) Jasper Newell (age 6-8) and the mesmerizing Ezra Miller (teen.) We're witnessing the genesis of a killer, and we figure out early on that the film is heading towards a big Columbine-like event at the conclusion. Needless to say, the film felt horribly timely, coming on the heels of the school shootings in Connecticut (although the weapon of choice here is a bow and arrow.) Evil is as evil does, and despite ample nurturing and attention from parents Swinton and John C. Reilly ("Stepbrothers"), from a very early age, Kevin is right up there with Damien from "The Omen" -- a creepy, malevolent little shit you want to strangle. 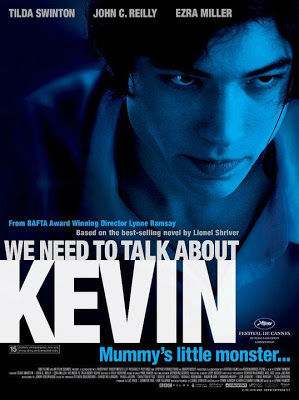 One of the rules of screenwriting we're bludgeoned with is "show, don't tell." What this means is, since cinema is a visual medium, it's better to show us something that to tell it. For example, let's say your protagonist used to be a cop but was thrown off the force after a big scandal involving ten hookers, a senator and a llama. Now you could TELL the readers this in a clunky, expository bit of dialogue; or you could put a flashback scene at the very top SHOWING the scandal going down, which works a lot better in a movie. In "Kevin," the screenwriters sagely embraced the "show, don't tell" ethos. There's a lot of character backstory in the novel they had to get out, and they chose to depict it all visually, every bit of it, mostly using wordless flashback scenes (there is a lot of jumping around in the time continuum, which we'll discuss in a moment.) So we see young Tilda and John in love in New York, young Tilda the famous world traveler and travel writer being carried away in some crazy tomato festival, pregnant Tilda uncomfortable with impending motherhood in a Lamaze class, and so forth.

The problem is, it's a bit confusing. Oftentimes we have no idea what's going on, what we're looking at. The tomato festival, for example, starts the film. But we the audience don't know what it means. It feels like an abstract sequence, something from an art film. If we knew, for example, where she was and that she was covering this event for a travel book, then we'd go, "Oh, okay." In fact it isn't until two-thirds of the way through that we learn she used to be a travel writer. When this is finally spoken, everything finally makes sense -- the maps on the wall, her getting a job at a travel agency, and so forth. So here we have a case of a little too much show, don't tell. In "Kevin," we really, really need a dollop of "tell." Sometimes direct exposition is indeed just what the doctor ordered.

We learn in the DVD extras that the flashbacks to pregnant Eva and the scenes of her with baby Kevin were meant to illustrate -- again, with images only -- that Eva was a reluctant mother and didn't put her heart into it, perhaps because of her career. Well, this came completely out of the blue and in fact, didn't read on film at all. None of those scenes conveyed to us anything about Eva not being into being a mom. Just the opposite, in fact. We infer that Eva puts aside her career to raise her child, and patiently tries anything and everything to communicate, play with and bond with her son, who rejects all of it, even as a toddler. In other words, the filmmakers failed utterly at conveying this specific character trait through visual-only means. How about a nice husband/wife scene where they talk about how she doesn't want to have a baby, it's going to wreck her career, or that she can't handle this screaming hellion anymore and they need to hire a nanny? To be clear, I'm all for show, don't tell, and the filmmakers are to be lauded for attempting to capture the mindset of the characters from the novel visually. It just didn't quite work. In adapting a novel, sometimes you need to verbalize the thoughts and emotions which are in a character's head.

In order to pull off all this show, don't tell, the filmmakers utilized a rather unique structure. No Save the Cat! paradigm here. There is no inciting incident, no midpoint turning point, no black moment at the end of Act 2. Yet "Kevin" is never anything less than compelling, which certainly proves that alternative structures can work when well-handled (and well-acted.) The story ping-pongs back and forth between numerous time frames, beginning with desperate, lonely and bereft Eva's present-day semi-existence, and then flashing back to various stages of her life and Kevin's development to tell most of the movie. The three acts loosely roll out as: Kevin as a toddler, Kevin aged 6-8, and finally, Kevin as a truly insidious teen. But even within this context, there are frequent jumps to other periods, including back to the present, featuring a minor subplot about Eva's ostracization by society and making a go of it in a crappy new job. It's a tricky and difficult structure to pull off, and the writers deserve big kudos for making it work.

But one thing that doesn't quite work is that post-incident, Eva is a pariah. She is subject to a non-stop torrent of vitriol by an angry public, which includes her house and car being splattered with red paint, verbal abuse from coworkers and even a right cross from an old lady. This treatment would really only make sense if she was the killer. Sure, there are going to be plenty of people angry, and some might indeed blame the mom. But considering her husband and young daughter were also murdered in the attack, and that Eva has moved from the murder home and now lives in a dumpy shack near the railroad where it would be a stretch for people to find her, the hostility feels a bit forced. Surely many would be sympathetic. She, too, lost everything.

To be fair, there is a nice moment when one of the victims rolls up in his wheelchair and is friendly with her. The filmmakers are making a valid statement here about how we as a society react to tragedy, of course. But perhaps this too would have more resonance if they'd also successfully painted Eva as the checked-out or self-centered mom they seemed to think they were portraying, as opposed to the bend-over-backwards-to-fix-this-kid lady we see on screen. Late in the movie, Eva takes teen Kevin out to dinner in an attempt to bond with her son. He cuts her to the quick by anticipating how much she's going to drink and everything she's going to say. It's mother/son psychology folded, spindled and mutilated, and it's a breathtaking scene. But the point here was to illustrate that she's just been pretending to care for Kevin's entire life, and he knows it, so cut the shit. It doesn't really play, because we've seen her care. In fact, the one scene where she loses patience with 8-year-old Kevin and hurls him to the ground, breaking his arm, we're right there with her. You'll be ready to smash this kid's head in as well.

The point of this all is that, while this is a flawed movie, there is much to be learned from it. As writers, we often get pigeonholed into writing formulaic structure; Like "Memento" and "Pulp Fiction," "Kevin" blasts that to pieces and shows you can indeed tell a great story in a non-linear way. Add in spectacular performances, creeping tension and a theme that resonates with what's going on right now, and you have a movie that should be on every screenwriter's Netflix list. Check it out and then hit me back and let me know what you thought!

It's January. Know what that means? The return of spec season is almost upon us. Every year, once everyone gets back from Sundance, they start reading scripts. February through May is usually an intense period of spec activity. Buyers have usually refilled their coffers (new fiscal year) and are ready to pick up some scripts. So now is the time to get your polish on and get ready to rock. Check out my Agent's Hot Sheet article below which I think you'll find helpful -- "the New Paradigm." I wish you all the best of luck with your screenplays and an exciting new year fraught with opportunity!

Continue to Writers on the Storm Quarterfinalists (So Far)
Jump to Agent's Hot Sheet
Posted by Admin at 3:58 PM