Coverage Ink Films' second short, LIBERATOR, premieres Saturday 8/11 at Grauman Chinese Theatre in Hollywood, at the Holly Shorts Film Festival. LIBERATOR stars Lou Ferrigno as a disgraced, washed-up ex-superhero whose secret black ops past comes back to haunt him as he tries to put his life back together. Like the LIBERATOR character, the heat is also on Ferrigno, as he was recently on NBC’s “The Apprentice,” he also helped voice “The Hulk” in this summer’s box office smash “The Avengers,” and continues to pack them in at fan conventions around the world. 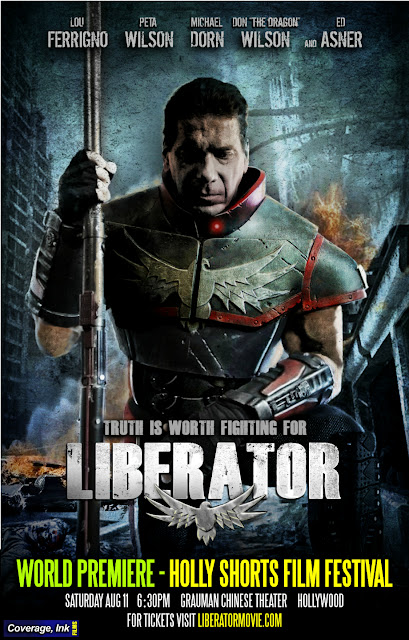 “After months of anticipation the fans will get what they’ve been waiting for, the world premiere of LIBERATOR,” said Jim Cirile, the film’s co-writer and Executive Producer. “LIBERATOR is a superhero geek’s dream come true, grounded in a reality we’ll all recognize -- our own. This is a very real world and a very real, and all-too-human, man. It’s the performance of Ferrigno’s lifetime. I think everyone will be impressed by the performance.”

Added Director Aaron Pope: "Launching a new superhero franchise without a comic label behind us and without money is a nearly impossible task, but from the amazing cast to the dedicated crew, no one blinked, no one wavered.  They put everything they had out there, especially our incredible cast. It's extremely satisfying to finally be able to show everyone the fruits of our labor."