The Occupy Movement has been both ignored by and largely vilified by the corporate US media, who wish to paint this group of law-abiding, concerned citizens as a bunch of freaks and loons -- while they ignore the crimes committed by the banksters, who ripped off the world and walked away scot-free. But the truth is simple: the banks got bailed out; the people got sold out. Until there is accountability, this movement is only going to grow. We say, kick ass, Occupy. New York screenwriter Jen Senko has been on the ground since day one. Here's her perspective from the field.

My background is documentary filmmaking, and I’ve been following the rising income inequality in America for years. Recently I co-produced a film (with Fiore DeRosa and Erika Hampson), THE VANISHING CITY, illustrating the devastation the war of the Haves against the Have-Lesses has wrought upon New York.

In early September, I saw something on an alternative online rag about a protest being organized by the group Anonymous. They planned for 20,000 people to occupy Wall Street with tents and soup kitchens and media centers. The group said they wanted to bring attention to the crimes committed against America and the world by Wall Street with its irresponsible, reckless and malicious actions and criminal behavior, aided and abetted by its servants in Washington.

I’d been furious for years at a system rigged in favor of the corporations and the already-privileged.  Our democracy was well down the road of becoming a corporate kleptocracy. Then when the activist so-called "Justices" on the Supreme Court handed down the Citizens United decision, I believed our democracy had more than just one foot in the grave.  Many friends felt the same, as we saw our jobs shipped overseas, our quality of life disappear, unnecessary wars being waged, our voices marginalized by a corporate media, shady new computer voting and campaigns funded by big money.

After this outrageous ruling came down, a pervasive feeling of helplessness was inescapable.

When I enthusiastically informed my friends about Occupy Wall Street, I was surprised and disappointed when they dismissed the endeavor.

Thus, on September 27 (the day Occupy Wall Street began), I was by myself when I went to the park at the corner of Liberty and Greenwich Streets. The park was originally named Liberty Park, but when Brookfield Properties purchased it (assisted by massive taxpayer rebates), they renamed it Zucotti Park. Nowadays, we always refer to the park by its original name.  It was an extremely cold day, and I guessed there were approximately 100 people who had been pushed out of the Wall Street area. Most seemed to be in their 20s, a few in their 30s, a few in their 40s and a several people with gray hair. Many had sleeping bags. Two rickety card tables had been set up with bagels, cream cheese, butter and in a tin pan, a mostly vegetarian potato dish (which was quite tasty!).

A General Assembly meeting was held to decide whether or not to take down the signs on the park trees, which the owners of the park had requested. People sat on the cold cement and used a unique sign language, wriggling their fingers upward if they approved of the motion. They did this to minimize the noise, as they felt they were also more likely to be arrested if they used the bullhorn.  The GA was time-consuming because anyone and everyone’s opinion was welcome.  There was no hierarchy; no single person was in charge.  Several people took turns hosting the meeting.  Even after a vote by what appeared to be 80% in favor of taking down the signs, the option remained for anyone to block the motion.  After several hours, people decided that the trees and the park owners should be respected. The signs were taken down.

I shot some video, and after a few more hours, feeling thoroughly chilled, I went back to my overheated New York City apartment. 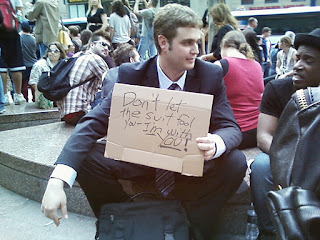 Where I felt terribly guilty.

I called my friends to try to get bodies down there, but no one was interested. No one... until they saw YouTube video of the white-shirted policeman pepper-spraying two women they had trapped like cattle in their net fence.

Suddenly, my friends (and the world) took notice.

The next major event was in Washington Square Park, with hundreds of people.  The police were standing peacefully outside, so everything went smoothly. The new people were introduced to the General Assembly idea, the People’s Mic, Mic Check and the sign language.  The crowd was so huge that the mic checked about three layers of voices deep. (Mic Check is where one person's speech is repeated and amplified by a group in order to spread the word.)

Now, the tents at Liberty Park have been torn down, but the movement has grown and keeps growing. As we all know, Occupy is now a global shorthand for the 99%’s resistance to the extortionate rule of the 1%.

A few weeks ago, on the two-month anniversary of Occupy Wall Street, approximately 33,000 of us marched from Foley Square over the Brooklyn Bridge and into Brooklyn. It was totally peaceful, in contrast to that morning on Wall Street of November 17, which had been charged with tension and often violence.  Every age, every race, every class of people participated -- rich old white people, poor young students, unions, suit-and-tied professionals, baby boomers, grandmas. The grandmas elected to sit on the bridge and get arrested. Still, the protest was peaceful and orderly, even though we were funneled in and out longer detours to and from the bridge.

At the top of the bridge we were met with a beautiful sight.  The Verizon skyscraper, with no other buildings around it, had the image “99%” projected on its side.  I felt like I had run a marathon or won the lottery.  Cars on the bridge were beeping and waving to us, cheering us on.  The march felt charged with the excitement and optimism of New Year's Eve.

It was one of the best nights of my entire life, and when I sat down to begin the revisions to my screenplay, I was recharged with a newfound exuberance and hope for the future of us all. The Occupation has only just begun. 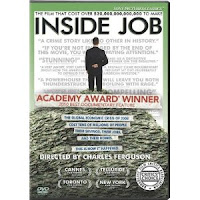 Get involved! Watch the Academy Award-winning best Documentary Inside Job. That will give you a clear understanding of who screwed us and how. Then find a local Occupy group and make your feelings known. Don't count on the Obama administration to fix anything--despite Obama's populist rhetoric, they're as mobbed up with banksters and Wall Street elites as the Bushies before them. Real change will only come from pressure from the people. It's up to US.

Back to Newsletter
Posted by Admin at 5:45 PM

THANK YOU for being out there Ms Senko. This country is going down the toilet and no one gives a shit. Everyone thinks because Obama is in office they can relax. Well guess what, he's been nothing but Bush II but with way better PR. All our rights continue to be eroded out from under us while the big banks laugh all the way to the big banks. I wuish I could be in new York or i would join you but know that there are people who stand with you. I am a veteran and a independent leaning republican but there are no persons who represent honesty and responsibility in govt right now except maybe Ron Paul but the media mocks him because he tells the truth. Its a sad state of afairs. Anyway thank you again.

You go girl! We need committed activists out there, because the MSM and the so-called Democratic Party are not standing up for us. I am convinced this movement will not go away. Our numbers are only growing.