I've been reading "Thor" since I was 5, and so I was really excited about the selection of Kenneth Branagh as the film's director. If anyone could really add depth to these characters, not to mention make Thor's "verily-and-forsooth" faux Middle English patois not laughable, it's Branagh. Turns out I was only partially right. 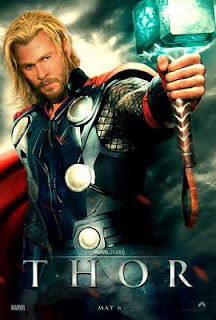 Now let's just get right out there, I kind of liked the film. Captain Kirk's dad did a great job in the title role, radiating real star power and charm. Anthony Hopkins' gravitas indeed made the Asgardian elements of the story compelling when they could have been laughable. The fish out of water stuff on Earth was passable and generally fun, and some of the action was creative.

But I had two big problems with this flick. This first is: it was a nonstop CGI fest, from start to finish. Sure, we had some big sets and a few smartly designed practical elements, but the vast majority of the film looked fake. They spent $150 million (!) to make this thing, and yet the overload of enormous swooping CG vistas were a snoozeroo. To my eye, they never had the verisimilitude of a proper miniature set (although the Jodenheim ice world design was very effective), and the big Destroyer whom Thor fights in New Mexico, again, never believed it for a minute. Remember 29 years ago, in Star Trek II when we saw the Genesis Effect for the first time, how cool that was? Well, we've been so bludgeoned with similar visuals since then that, frankly, I don't care anymore. And they still look fake.

But that's not my biggest problem with Thor. That would be: movie shorthand. Movie shorthand means a plot event or characterization or subplot not fully developed in the script; but because we've seen a similar element in movies before and kind of know how it's supposed to go, the filmmakers just sort of sketch it in. They forget to do the heavy lifting necessary to really motivate the element and make it work.

In Thor, I'm specifically referring to character arc. Thor starts out as fat-headed and arrogant, so much so that his father banishes him from Asgard and sends him to Earth, powerless, to teach him a lesson! That's pretty bloody severe. But okay, so far so good. We've certainly seen this character arc in movies before, and thus we have a pretty good idea that over the course of Act II, Thor is going to learn a painful lesson in humility. And of course, that's exactly what happens.. sort of. Problem is, the transformation is not motivated by anything that happens in the script. It simply happens, and we're supposed to accept it because, well, it's movie shorthand.

Now what should have happened is something like what happened in As Good As It Gets and Groundhog Day. We have a charming jackass who by interacting with a feisty female, finally starts to get that he needs to change in order to be worthy of her. The arcs are handled masterfully in both those films. But in Thor, while Captain Kirk's dad interacts with, and grows fond of, Natalie Portman's quirky scientist character, we never really believe he's falling for her, and we certainly never believe he has to change his behavior in order to get anywhere with her. Instead what happens is: Thor abruptly, and with no tangible motivation, becomes gregarious and charming early in Act 2.

Huh? Wait. Where's the scene where he gets his dressing down from his fed-up costar? Where's the scene where he realizes he cannot achieve his objective UNLESS he changes? The mythological movie formula (which Thor in all other ways follows) dictates that the protagonist realize his Problem at the midpoint, but he cannot solve the problem yet. It's only in Act 3, after the black moment where the lead character is the farthest from his goals, that he finally assimilates all the knowledge he's picked up along the journey from interacting with the other characters, and realizes HOW he can change his approach -- in other words, arc. Once that change happens, the hero is finally able to solve his problem and achieve his goal and defeat the threat in Act 3. But Thor, eh, he don't need any of that. Simply landing on Earth and being stranded there with Natalie Portman, whom he doesn't really appear to have any real sparks with, changes him into a jovial sweetheart by the 30-minute mark.

Now one might argue that any deviation from formula is a good one, and I would agree in theory. But when your movie hits those formulaic waypoints (verily, with a loud clank) the rest of the way, and we do not believe that the character as depicted in Act 1 could so abruptly change his tune scant minutes later, well, that, my friends, is just crappy writing. AKA: movie shorthand.

Be aware of it and by Mjolnir, keep it far from your scripts, if you can :)

Return to Newsletter
Posted by Admin at 2:24 PM

I am suprised you did not mention the one thing that really jumped out to me, and that is the big plot hole. in THOR Loki is Thor's bnrother but it is reveled he is actually a frost giant who was rescued by Odin when he was a baby. I was like what? How could he not know he is a frost giant? Theguy has the ability to shapeshift and he turns into a frost giant, so duh! The whole thing seemed pretty rediculous to me.

Hi, Ramon, I agree with you on that one. There would have to be some sort of Asgardian magic at work to prevent Loki from realizing his true nature and from using his powers. Perhaps this explanation was shot and wound up on the cutting room floor. But in any event, you are correct, it is pretty stupid!

I gotta agree with the character arc problem. I think the hurdle they had in front of them was a little too high. There was a LOT of tale to tell in that short of a time, and it did fall short in that area.
Having said that though my Jack Kirby days fondness for Thor got a real charge out of some of the "Thor" stuff that they didn't shy away from. They powered him up the way he should be and now I am excited to watch Thor and The Hulk go at it (In what just HAS to be a scene) in the Avengers film.

Agreed, Robert! That Thor vs. Hulk scene is going to be THOR-gasmic!