So Many Cats to Save. So Little Time.

I recently took advantage of the fascinating opportunity to take part in Blake Snyder's Save the Cat! Beat Sheet Weekend Workshop. If I had to come up with a simple and poignant way to describe it, I'd call it the only workshop that you'll ever find in Hollywood that encourages your story's individuality. Remember that scene in the The Wall when the kids are on a conveyor belt and ground up in the meat grinder only to resurface as “clones” of one another? Well, I have been to other screenwriting workshops that reeked of the meat factory stench. That's definitely not the experience of The Beat Sheet Workshop.

For two straight days (and eight to nine hours a day), you're in a room with nine other people pouring out all the mental energy you have left to get them to care about your script. Weeks before, as I read Blake Snyder's "Save the Cat! Strikes Back", wherein he discussed his workshops, I thought to myself that I could never attend one of these. I had envisioned myself in this room with these amazing writers, squirming in my seat plotting out my exit strategy instead of my script. I just knew I'd be on the outside looking in on some secret society of the screenwriting world. My fears were proven wrong.

With Blake Snyder's passing in 2009, the workshops are now lead by the very thorough and knowledgeable Jose Silerio. He wasn't fumbling through notes, he didn't preach to us, and he wasn't trying to be Blake. He presented the ideas to us in the best way that he knew them. And his thought processes with every topic were honest and raw. I could tell that Blake's ideas were ingrained in Jose's heart.

Jose started out by telling us that it didn't matter whether we were novices or professionals, every one of us was starting from the same blank page. And that's an important attitude to have when you come in. Amongst the group, the common want at the start of the workshop was to just finish a script. But the common need at the end was to go forth and write the best screenplay we could write. There was no longer any doubt that we'd finish it. 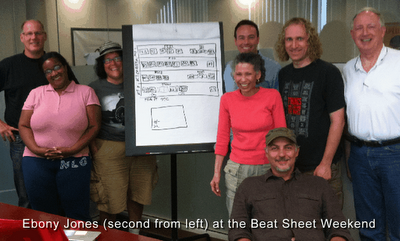 On day one, all you need to bring in the door is one or two (I'd say two at the most) ideas. And the goal of day one is just the logline and the three most important parts of the beat sheet (the opening image, the midpoint, and final image). On day two, the goal is to beat out all 15 beats with your chosen logline. About an hour was spent per story idea to hopefully help the screenwriter get the story to the next step of 40 cards and then the 110 screenplay pages. No one was rushed during the discussion sessions. The conversations flowed from one to the next. Even if an idea didn’t seem like it was going to work, nine others put our heads together to come up with solutions. There was no way we were letting anyone’s potential screenplay fall to the wayside. As Blake said in Save the Cat! Strikes Back, most screenplays, even the bad ones, can be recovered with the 15 beats and 40 cards.

I must explain my experience with the The Beat Sheet Workshop on an emotional level. My father is a recovered alcoholic. I once asked him after his 30-day stint in rehab, what did his world look like when he left that place? He said that when you're in rehab, you're surrounded by people that are just like you. You've all made the same mistakes. And you're all there to make systematic changes so that the rest of your life's story isn't so cloudy. But the most important thing, he said, was that everyone in rehab cares just as much about your sobriety as you do. So you take those 12 steps and you tailor them to your life's story. And though you are guaranteed different outcomes from the guy or girl that sat next to you in rehab, both stories will be brilliant. Recovery is brilliant, but the first steps out of rehab leave you panicked and afraid of the world on the outside.

When I walked out of the workshop on the last day, I felt exactly the same as my father described. Jose, Bruce, Carran, David, Doug, Karen, Rick, Rebecca and Stephen were the helpers that aided the recovery of my script. But we all came in with the same ailments of unstructured and horrible storytelling. And Jose, with Blake’s words of wisdom, took us through those 15 beats. On day one, there were some fears amongst us all that the outcomes would be the same since we were working with the same base formula. But by day two, we proved ourselves wrong because our efforts led to some brilliant and diverse script recoveries with the help of the same 15 beats.

Needless to say, I recommend a Beat Sheet Workshop with Jose. Know in your heart that you will not fail when it's time to go and you step out those doors to write that script. Your new comrades will be there if you fall off beat and need a helping hand to get back on track. Maybe even ask one of them, whoever you felt really “got” your story, to be your guide from page 1 Fade In: through page 110 Fade Out, and then present it to whole group again. Trust me -- they won't ask you for more than just movie tickets to the premiere. And that's a promise you want and need to keep.

Thank you, Blake and Jose, for the experience and support system.

Ebony Jones is a 2001 graduate of Cornell University's School of Hospitality with a degree in business communications. She has completed her first unpublished novel "Swimming in Blue Drink" as well as a short story, “When Ariel Lost Her Voice”. She is finally going to tackle restructuring the dramatic screenplay she's been working on titled “When Momma Dies”.

Return to newsletter
Posted by Admin at 4:32 PM

All the best to you Ebony and to your co-supporters. Barbara