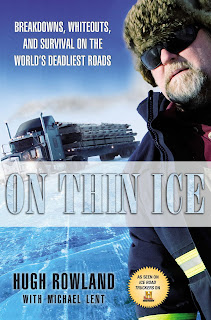 This just in from our pal Michael Lent, author of the terrific "Breakfast With Sharks," a guidebook for up and coming screenwriters on managing their lives and careers in the insane burg o' rejection we call Tinseltown. His new book ON THIN ICE, which he wrote with ICE ROAD TRUCKERS' Hugh Rowland, has just been released by Disney/Hyperion and is getting rave reviews. Check it out right here on Amazon.com.


On Thin Ice: Breakdowns, Whiteouts, and Survival on the World's Deadliest Roads [Hyperion]

Every year, a fleet of truckers travels beyond the northern equatorial line to the Arctic Circle, battling subzero temperatures and perilous conditions. Though treacherous, it is a region heavily endowed with natural resources. Locating this abundance of natural gas, conflict-free diamonds, and gold is relatively easy; extracting and transporting these goods is another matter entirely. The elite truckers chosen to deliver materials vital to these efforts spend two months traveling distances greater than Western Europe on naturally formed roads of ice only sixteen inches thick.

It is one of the most dangerous jobs in the world.
For more than twenty years, Hugh "The Polar Bear" Rowland has survived the ice roads like none other. Each year when the temperature plummets, Rowland leaves his family in Vancouver, Canada, to drive 1,900 miles to Yellowknife, where he will begin his odyssey. Facing the threat of perilous avalanches, hundred-foot cliffs, and the ever-present danger of cracking through the ice, Hugh must push himself to the limit. The payoff is sweet, but Rowland isn't in it just for the money; he is driven by the camaraderie, the call to adventure, and the chance to battle the odds year after year.
From the first snowstorm to the final thaw, On Thin Ice traces the history of ice road trucking, chronicles Rowland's preparation for the trek, and follows him through his perilous journey along the infamous ice roads. Take a ride with Rowland as he recounts tales of epic breakdowns and breathtaking heroism that are just a daily part of the job. In this classic battle of man and machine versus cruelest nature, only the strong will survive to see their payday, their families, and the chance to do it all over again . . . on thin ice.
Hugh Rowland is a star of the Ice Road Truckers reality series currently in its fourth season. Co-Author Michael Lent spent a month in the Arctic with Rowland researching On Thin Ice. He is the author of five books including Breakfast With Sharks, considered by many to be a foundation book on the business of screenwriting. Lent also is a writer/producer and is a former contributing editor for Creative Screenwriting magazine.
Posted by Admin at 1:19 AM