Mama, Don't Let Your Babies Grow Up to be Screenwriters

I have a 6-year-old daughter. She’s the light of my life, of course; cute and fun and smart and a total daddy’s girl, as all proper 6-year-olds should be ;)

And so one of the things we have been trying to do is find an area of interest for Alexandra that she really sparks to and wants to pursue. Indeed, we’ve tried all the usual activities that one does for kids—piano, soccer, art, karate, ballet, gymnastics, baseball, etc. And yet none of that has really taken. What generally happens is that she loses interest after about six months and would rather simply stay home and play, either with daddy or just by herself. 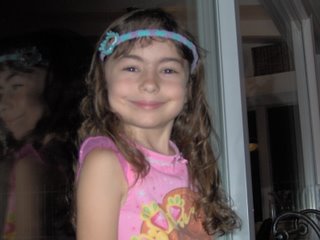 Of course, staying home and playing has all those other things beat, because one gets to create one’s own worlds. Heck, this only child loves creating cities out of Lego which she populates with dozens of toys, each with a very distinct personality--from the very British and proper Lucy Moose to a family of hapless, scheming, hungry alligators, to a duo of nogoodnik Lego chickadees with outrageously huge hats who are consumed with stealing treasure (and sound just like Elmo.) Of course it helps immensely that daddy is a bit of an amateur voice artist, and thus I voice many of the characters in cartoon and muppet character voices, while Alexandra rises to the challenge and has come up with dialects for the characters she performs.

You can see where this is heading. This kid, sadly, is developing an imagination.

It also doesn’t help that she sees daddy constantly reading and writing and editing scripts, coordinating writing contests, etc. She sits with me sometimes and asks if she can man the red pen when I do script mark-ups, and I dutifully will point out missing punctuation and such that she can circle.

The other day she came up to me and said, “Daddy, can we write a script and make a movie?”

Okay, okay. You’re thinking I’m nuts, right? Why wouldn’t I want my daughter to be interested in moviemaking? After all, I’m in it every day. Wouldn’t it be wonderful to share all this with her—seeing as I do anyway? Well, of course. But here’s the thing. Parents try to protect their children. And the thing that I most want to protect her from is the “life” of a screenwriter.

I’ve always viewed the screenwriter’s existence as long periods of rejection punctuated by occasional flashes of false hope. I also always say in Hollywood, any deal that is absolutely, 100% a sure thing, is at best a remote possibility. You can quote me on both ;) Seriously, I moved out to Los Angeles 15 years ago to pursue screenwriting. In that time, I have had years where I made a lot of money, but plenty of years in which I did not make a dime from writing. I’ve been involved in quite a few projects which slowly and painfully fizzled—as have many of you, I’m sure. There have been periods of intense and painful introspection, wondering if I should not have chosen a civil service job with a frickin’ pension. Of course, you forget about all that when you get a little success. But looking back on 15 years, when I think, Good lord, if I was a cop, I’d be 5 years away from being able to retire with half pension—jeez, it is withering.

Superagent Emile Gladstone once told me that the life expectancy of the average working writer in Hollywood is five years. Think about that for a minute. That means that even after breaking in, most writers are not able to sustain it into a lifelong career. For whatever reason—ego, being unable to deliver the goods, you’re no longer flavor of the week, whatever, eventually people stop hiring you. The career lull hits, and the writer then has to try to reinvent himself. This is where the desperation often sets in, as your mortgage company generally does not understand that you’re having an off-year. This can also be very, very hard on relationships. There’s a reason why marriages last an average of 1-2 weeks in Hollywood. The savvy writer will have invested well while riding high—perhaps bought some income property or a business—that will help sustain them. But… we’re writers, and most of us don’t think that way. We just assume once the gravy train leaves the station, we’re set for life. BZZZZ. Wrong. The truth of the matter is, a very, very few working screenwriters are able to turn a deal or even three into a career.

And so all this knowledge of the realities of the screenwriter’s life weighs heavily on my mind when I look at Alexandra and witness what may be her inevitable evolution into a writer. And I think, “Uh… make a movie? Hey, how about we sign you up for scuba lessons, honey?”

Of course, when she does decide to write that screenplay, well, she’s going to have a leg up. Because daddy will do his best to make sure she avoids my many, many mistakes. She already understands that EVERY scene must have conflict. Heck, things get pretty boring at the moose house if Claude Alligator and his slavering brood don’t show up to wreck Lucy Moose’s tea party. She already understands how critical it is to self-edit your screenplay. And she sees just how exciting and satisfying it can be to create your own world and populate it with characters who do whatever you want them to. How the heck can ballet compare to that?

I'm going to buy my kid Final Draft when he's 6 and send her to Writers Boot Camp. I bet he'll have better luck than me.

I don't have kids but that's funny, I've never thought about it that way. Actually I think it'd be worse if they wanted to be an actor. Anything creative really. If I ever have a kid he's going to be a plumber whether he likes it or not.

I just bought my son (12) a video camera for xmas, and now he's making movies all over the place. how soon until the studios are made irrelevant by any kid in the world being able to make a movie, edit it on their computer and even do their own cgi? The mind reels!