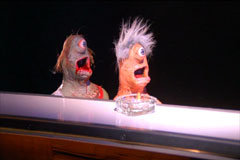 Way back when, in the halcyon days of the late '80s when Republican presidents were sane and big hair still rawked, I had the pleasure of working on a little film called The Edge of Hell (later renamed Rock N' Roll Nightmare for VHS release.) Conceived by my brother-in-law John Fasano (who went on to an excellent screenwriting/directing career) as a ultra-chee-Z camp rockin' horror flick, we assembled a team of our friends -- artists and sculptors all -- in John and my sister's basement to sculpt all manner of wacky monster puppets on a budget of $3. Literally. Oh yeah, and we also all starred in the film as heavy metal icon Jon Thor's band. That there was some fine actin', let me tell you! The finished film came out laughably, wonderfully bad, and has garnered a sizable cult following over the years.

Well, I am happy to say that Rock N' Roll Nightmare is finally coming to DVD June 27th in a glorious, feature-packed special edition brimming with outtakes, a Thor documentary and and hilarious commentary from Thor and Fasano. If you live anywhere near Burbank, stop by horror bookstore and collectibles shop DARK DELICACIES on July 5th at 7 PM. 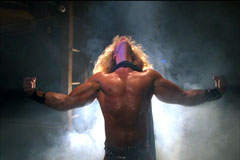 I'll be there along with Fasano and my sister Cin and others involved with the movie signing DVDs. Dark Delicacies is located at 4213 W. Burbank Blvd.
Burbank, CA 91505.

Check out the review at DVD Maniacs. Then stop in and ridicule me for my outrageously bad Aussie accent in the film. Well, at least I get to play drums, get laid AND eaten by a zombie. Which I consider to be a great way to spend the day. Friggin' A, mate!

Pre-order the DVD from Amazon HERE.

(Good Lord, me with blond hair!)

I had the pleasure of working on a little film called The Edge of Hell (later renamed Rock N' Roll Nightmare for VHS release.)

Boy, just when I thought I could be no more impressed with you!